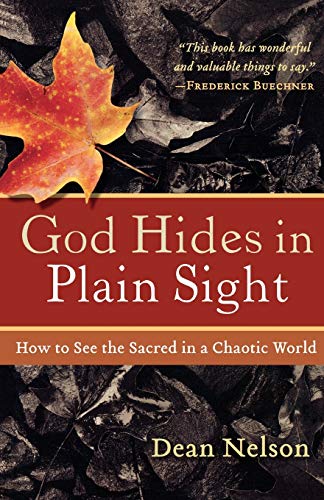 How to see his presence in the ordinary.

In Joel and Ethan Coen's movie A Serious Man, central character Larry Gopnik is a modern-day Job (disguised as a bland physics professor living in the Sixties) who is plagued by various permutations of the God question as his life goes from bad to worse. "What is Hashem ["the name" in Hebrew] trying to tell me?" Larry wonders as his wife leaves him for their smarmy friend, his kids seek solace in drugs, sex, and rock 'n roll, and his emotionally stunted brother (with a neck cyst that needs frequent lancing) sleeps on his couch.

Gopnik tries in vain to explain the Uncertainty Principle to uncomprehending college students while his own life spins out as a metaphor for uncertainty itself. As ignored by God as he is by his self-absorbed family, Larry seeks answers from three rabbis, who do little more than shrug and offer vague platitudes. The film, shot in the Coens' hometown of St. Louis Park, Minnesota, has that M.C. Escher quality of a riddle within a riddle, a spoof within a spoof, causing more than one viewer to leave the theater wondering, "What was the point of that movie again?" Precisely, the Coens seem to snicker.

As Larry goes through a host of torments, the world and the God behind it come across as capricious and unpredictable. Poor Gopnik! Too bad he didn't have a copy of Dean Nelson's timely book, God Hides in Plain Sight: How to See the Sacred in a Chaotic World, on hand. A thoughtful and accessible guide to Larry's existential questions, and ours, the book addresses profound truths with humor and a light touch. Like the Coen brothers, Nelson doesn't take himself too seriously. Unlike the Coens, he's convinced that God is there for the knowing—not playing tricks on hapless pilgrims who blindly stumble through life looking for the meaning of it all.

Describing how many Christians interpret the signs of God's work in the world, Nelson says: "I think we treat the continuous ways God breaks into our lives the same way we look at baseball team signals. They are hidden, secret, and only for the insiders, like the clergy, or those with a lot of time on their hands, like the informed or elderly. Prayer 'warriors' they are called. And sometimes the signals are given strictly to throw some people off course because they don't know which signal is the 'activator.' It is as if God is there, but he is hiding until we can figure out the signals he's sending."

Nelson intersperses anecdotes from his years as a globe-trotting reporter (he's been a stringer for the New York Times, the Boston Globe and other publications) and journalism professor at Point Loma Nazarene University in San Diego with a thorough examination of the sacramental moments that he sees everywhere. His goal is to get us to pay attention to God's presence in our lives, those points at which life is "punctuated by the sacred and holy." God's presence can be experienced in the expected ways—through worship, prayer, Bible reading—but also in conversations, inspired moments, and unexpected encounters.

The Christian sacraments, Nelson writes, encompass "the entire rhythm of our lives in this world." He examines the seven traditional sacraments—vocation, communion, confession, confirmation, marriage, baptism, last rites—then adds another: service, which he defines as "a way of bringing order to the disorder, and revealing further that we are surrounded by the sacred and holy."

The sacraments aren't "static and fixed"; rather, they are "tools for improving our vision," a "means by which God breaks through our ordinary days to remind us that he is with us. That he got here before us. That, through bursts of these sacramental revelations, there is order in the disorder." Nelson describes the sacrament of confirmation, for instance, as "more about the path than the events that occur along the path." Quoting Bonhoeffer, he admonishes us to "allow ourselves to be interrupted by God."

Nelson draws heavily on many of the mainstays for those interested in the contemplative life—Thomas Merton, Parker Palmer, Eugene Peterson, Henri Nouwen, Richard Foster, Frederick Buechner—but avoids any tendency to describe his own intimations of the sacred in a ponderous tone. Like the excellent journalist he is, Nelson does lots of showing and not so much telling as he spins stories from forays around the world to illustrate how God is at work in all manner of mundane activities and often takes us by surprise. "Paying attention, staying awake, practicing mindfulness, listening to the present moment," Nelson says, "are all part of the bridge between developing our interior lives and seeing the events of our days as sacred moments." And the events he relates from his own life range from hearing "The Spinning Song" played in a Bombay hotel lobby to getting a surprise phone call on his fortieth birthday from former New York Yankees pitcher Jim Bouton.