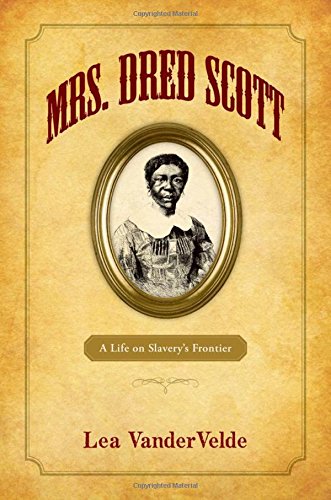 The woman behind the scenes of the famous case.

The simple title makes a powerful statement all by itself: "Mrs. Dred Scott." What eminent legal scholar Lea VanderVelde does in her exhaustively sourced treatment is shed light on the famous Supreme Court decision's principal from the perspective of the proverbial great woman behind the great man, a woman invisible on the legal complaint's face but transformative in her insistence on achieving her freedom.

The case is familiar to anybody who has seriously studied American history. A Missouri slave sued his master for his freedom, and the case worked its way up to the highest court in the land as Dred Scott v. Sanford. Scott's fight for freedom is widely regarded as the most momentous judicial event of the 19th century, even though the court ruled against him 7 to 2. According to Chief Justice Roger B. Taney's majority opinion, Scott could not sue Sanford because Scott was not a U.S. citizen, and Scott was not a citizen because he was both a black man and a slave. Taney's conclusion, which went further to assert that black men "had no rights which the white man was bound to respect," was at once a serious setback to abolitionists, an injection of buoyancy among slaveholders, and a constitutional crisis for the country. In declaring that African Americans were not citizens of the United States and that the Missouri Compromise of 1820 was unconstitutional as an act of Congress, the Court also was redefining the relationship between the states and the federal government, making possible the expansion of slavery into the territories. A few months after the decision, Scott's owner—the last of three whom Scott had attempted, at various points, to escape from, to buy his freedom from, and to sue—freed him. Scott continued to live in St. Louis with his wife and daughters until his death the next year; African Americans would not become full citizens of the United States until the ratification of the post Civil War Fourteenth Amendment, in 1868.

Those aspects of the Dred Scott story are well known. VanderVelde, a historian who writes widely in employment law, property law, legal history, and constitutional law, offers something new. Through the subtle but essential lens of a forgotten spouse, she invites readers to re-imagine the origins, currency, and legacy of what has been called the most disgraceful legal decision in the history of American jurisprudence.

This undertaking could not have been easy. Neither Harriet Robinson Scott nor her husband was literate, and almost no existing writings focus on Harriet. Nevertheless, VanderVelde, an evidentialist of the highest order, uses all kinds of information to piece together what life was like for Harriet Scott and what must have motivated her. Over the course of her life, Harriet lived in both free and slave territory, became a mother of two daughters, and cared for her aging husband until his death in 1858, engaging in the protracted and vexing legal battle for a substantial chunk of that time.  VanderVelde was resourceful in her investigation, taking advantage of the fact that Harriet and Dred lived in the households of highly influential persons, who did leave written records, thereby enabling more to be known about the Scotts than about many frontier slaves. Central to VanderVelde's exclusive findings were the copious journals of Harriet's owner, Lawrence Taliaferro, the significance of which, the author states, has "been overlooked by every previous historian of the Dred Scott case." VanderVelde also exploits the sexism of previous generations to develop her scoop: As she states in prefacing her work, "The very simple, almost obvious, idea that a wife's life circumstances were as significant to the context of the family's struggle for survival as her husband's has opened several additional avenues of archival research never before explored by historians of the famous case."

VanderVelde's groundbreaking book demonstrates the significance of gender in the historical development of rules in contracts, torts, and constitutional litigation, the substance of much of her previous scholarship. Having produced an impressive collection of other publications, VanderVelde prior to publishing this book played an important role in the discovery of almost 300 freedom suits brought by slaves in the St. Louis courts. That work takes form in her current book project, Redemption Songs: How Slaves Sued for Freedom in St. Louis Courts.

Like any effective lawyer, VanderVelde calls on the power of the written record in drawing careful and credible inferences to fill the holes in the story. Readers not accustomed to legal scholarship might find her narrative cluttered due to its frequent footnoting relating to the factual record. This style, however, is necessary for two reasons: to ground and amplify surprising but established facts, and to substantiate the otherwise-controversial inferences derived from them. Such asides, which appear among the 113 pages of notes complementing the 324 pages of main text, are the stuff of serious scholarship in the field of law. In the history-lesson context, the result of this form of writing is to surprise the reader into new thought as to the subject matter under examination. In Mrs. Dred Scott, readers are called upon to contemplate for themselves the extent to which Harriet's frontier experience as an antebellum slave (in contrast to her husband's rearing in Virginia and Alabama, the author points out) is worthy of depiction ("because it runs so counter to the predominant slave narrative," she argues), and they can answer that call by getting into the sources.