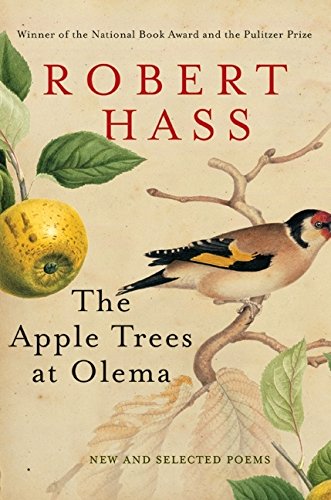 Some might consider Robert Hass to be the Dominating Golden General of contemporary American poetry, although any hint or taint of the tyrannous will seem remote from him. Hass is winsome, widely respected in the literary world, and his poems (and the voices speaking in them) are vastly appealing. These should be reasons enough to obtain and take pleasure in The Apple Trees at Olema: New and Selected Poems. In some volumes sharing this format, the new work is thin, serving mainly to garnish the literary buffet of several previous books. Hass' existing readers will be pleased to know that the "new" section here is substantive—forty pages of elegies, a ballad, and notebook meditations. Also generous are the inclusions from Hass' five prior books, including the seminal Praise and his last collection, the critically lauded Time and Materials. One of Hass' best known poems appears in the former book, "Meditation at Lagunitas," with its distinctive mix of discursiveness and poststructuralism ("The idea, for example, that each particular erases / the luminous clarity of a general idea") and love-making and bread and a clown-faced woodpecker and an assertion that, while paradoxical, still outlasted high theory: "There are moments when the body is as numinous / as words, days that are the good flesh continuing."

That peculiar effectiveness is present in the new poems, too. Some of the images from "Meditation at Lagunitas" reappear in the first "Notebook" sequence—woodpecker, juice from berries, rich flora, along with a tender recording, in a travel setting, of "this passenger tenderness." Most of the new poems feature in-transit narratives or memorable encounters with strangers: poet on the go. Certain lines recur and are recast. Hass continues to manage that most delicate of feats: his poems suggest a writer as sage and good citizen and "alienated one who is as lonely as you," and somehow these personas are never cloying or off-putting or dishonest. He may describe, as in the book's final poem, how "the wind comes up, / And the surface of the water glitters hard against it," but he also admits that this bliss is only glimpsed "as you drive past / Running errands." He admires the poet-monks and has learned from them, but he never bludgeons us with attendant severity. Most important, Hass' speakers don't allow earnestness to set aside, as if less important than just caring, a care for language and disciplined engagement with craft. Hass may happily take a walk with you, but he will not let you, and certainly won't let himself, settle for poems that are OK or merely well intentioned.

A Wall Street Journal feature last year described Hass as "a pleasant man with a warm countenance, wearing blue jeans and a black windbreaker." He is, at the very least, America's Golden State poet: a child and constant resident of the Bay Area, which informs a naturalism in his writing as it did for fellow coastal poet Robinson Jeffers, whom Hass has championed. And like a number of other West Coast poets, Hass developed his own poetic art by studying the masters of haiku. He is a sensitive observer, and always deeply sensitive to the nation's tastes and troubles. His verses have brooded on war and history's inheritance of violence, a preoccupation that no doubt developed more fully through his longtime translation work and literary friendship with the Polish poet and Nobel laureate Czeslaw Milosz. Lately Hass' work has expressed more urgently its longstanding environmental awareness. In short, Hass, accomplished and relevant, is a poet whom poets like to like.

Still, if they ever acknowledged among themselves a desire or need for a Dominating Golden General, then Hass would be a good candidate. Since winning the Yale Younger Poets Prize in 1972, he has enjoyed nearly four decades of steady accomplishment. He has long taught English at Berkeley, and has served two terms as U.S. Poet Laureate. His Twentieth-Century Pleasures, a collection of criticism, won the National Book Critics Circle Award, and Time and Materials recently received both the Pulitzer Prize and the National Book Award. "He is exultant, / as if something he felt were verified, / and looks to her to mirror his response," reads a passage in the title poem of this present collection. Flourishing in a Yeatsian late-career success, Hass might be that "He," and we, holding this new book, may just be the readers whose mirrored response he seeks.

Brett Foster is assistant professor of English at Wheaton College. His writing has recently appeared in Image, Kenyon Review, Poetry East, and Raritan.