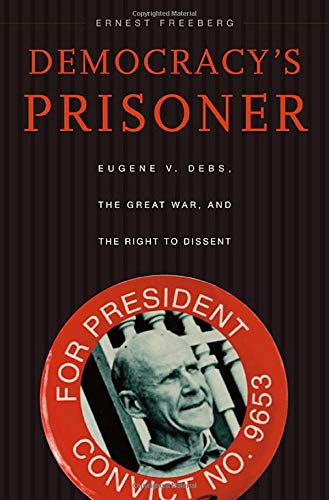 In the preface to the second edition of his seminal social biography Eugene V. Debs: Citizen and Socialist (Univ. of Illinois Press, 2007), Cornell University professor Nick Salvatore builds a case for the continued relevance of the man known throughout the early part of the 20th century as America's most famous—or infamous—radical. In what may be read as a thinly veiled reference to a specific presidential administration and its policies in the post-9/11 world, Salvatore suggests that "recent developments in American political culture have actually restored Debs and those who joined him in a variety of social and political movements to a renewed place of relevance in our current political debates."

Ernest Freeberg would say amen. Whereas Salvatore's work traces the entire arc of Debs' life and impact from his birth in Terre Haute, Indiana in 1855 to his death at an Elmhurst, Illinois sanitarium in 1926, Freeberg's Democracy's Prisoner: Eugene V. Debs, the Great War, and the Right to Dissent focuses primarily on Debs during World War I—under Woodrow Wilson's administration—and in the early phase of Warren G. Harding's presidency, when Debs was granted clemency from the federal penitentiary in Atlanta after serving three years of a ten-year sentence for charges of subverting the war effort during a speech in Canton, Ohio. Above all, Democracy's Prisoner  considers free speech and censorship—and civil liberties more generally—during a time of war.

There are numerous subplots in Freeberg's excavation, including the birth of what became known as the American Civil Liberties Union and the intersection of political upheavals in early 20th century Russia and the rise of the Socialist movement in the United States. A colorful cast of literary, labor, and political characters—including Samuel Gompers, Helen Keller, Emma Goldman, Upton Sinclair, H.G. Wells, Carl Sandburg, and Jane Addams, all of whom were supporters of Debs or the Socialist cause in one way or another—make regular and fascinating appearances in the pages of Democracy's Prisoner.

But the central figure is the five-time Socialist Party presidential candidate, Convict No. 9653—Eugene V. Debs.

Freeberg's version of Debs' story, though richly detailed and thoroughly footnoted, reads with the intrigue of a page-turning mystery or an unlikely rags-to-riches-to-rags tale. Debs, who dropped out of a Terre Haute high school at the age of 14 to take a job as a painter in one of the city's many railroad yards, rose to some notoriety in 1893 as he organized the first American industrial union, the American Railway Union, in Chicago. The following year, the union's boycott and strike of the Pullman Palace Car Company, for which he served time in a Woodstock, Illinois jail, catapulted Debs' name into the pages of the reform-minded press of the day and eventually led in 1900 to the first of his five presidential campaigns. It was in the Woodstock jail that Debs, who did not yet identify himself as a Socialist, read the works of Karl Marx and encountered what he came to derisively call "capitalistic justice"—something he would spend the rest of his life fighting against.

"For Debs," Freeberg writes,  "the government's willingness to use court injunctions, guns, and prisons against the railroad workers proved that an unholy alliance between government and capitalism was subverting American democracy." Until then, Debs "had considered himself a Democrat, even serving a term as a representative in the Indiana legislature in 1885. After the Pullman strike, he lost faith that either of the country's main political parties would protect the interests of working people."

Debs would place his faith in the Socialist Party, which he helped to found. And it was the party's ideals regarding class and labor struggles—and his critique of the motives for the "plutocratic" Wilson Administration's entry into the "European war"—that Debs was addressing at a June 16, 1918 Socialist gathering in Canton, Ohio, a historic speech that led to his arrest under the day's powerful espionage and sedition laws.

In June of 1918, with American troops entering the battle lines in France, the public was just beginning to see images and read accounts of the carnage in what was known as the Great War.   "In that charged atmosphere, Debs delivered one of the most famous protest speeches in American history. He suggested that the country was not fighting a noble war to save democracy, but was joining European imperialists in a greedy struggle over profits," Freeberg writes. "He also denounced the government's domestic war on dissent, insisting that hundreds of his comrades had been jailed for telling the truth that rich men declare wars while working men die in them. Across the country newspaper editors clamored for Debs's arrest, and federal agents soon obliged them."