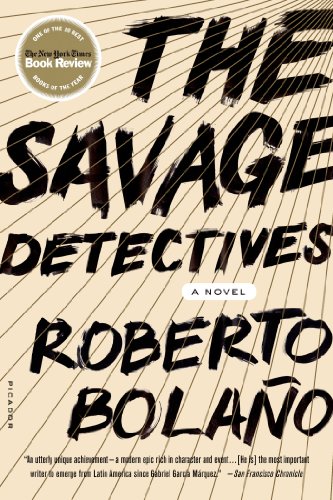 Who Is This Writer? How Does He Know Me?

An encounter with Roberto Bola&ntilde;o.
November 2008

Setting aside Osip Mandelstam's contention that everything a poet writes is actually a gloss on himself, no matter the topic, I normally don't write about myself. But I have an uncanny relationship with Roberto Bolaño.

Bolaño's fictions fuse the received with the imagined, the anticipated with what's remembered, politics and poetry with faith and expediency. They're at once particularized and abuzz with the same otherworldly aura that Jorge Luis Borges generates with his scholastic visions. But where Borges, a blind man, fashions what might be termed blueprints of time, or machines that read such prints, Bolaño places poetry at the center of his enterprise.

By poetry, I understand Bolaño to mean (as I do) the only form of the human voice that lasts, which is in turn the only human thing that lasts. Everything else (insert here a complete dictionary, or better, alphabets waiting to be arranged) says goodbye as it arrives. I take pleasure, too, in the way Bolaño (like Tolstoy, Proust, Cervantes, Dickens, Borges and so forth) weaves the folk of actual history, literary and otherwise, into the lives of his characters: real readers of imaginary books, real books about imaginary people, and so on in finite but unlimited variation.

Earlier this year, I read Distant Star (1996/2004), which Bolaño published in Spanish before The Savage Detectives (1998/2007). Nothing in my experience as a reader of strange, wrought, penetrating books of any sort prepared me for the repeated shock I felt reading Distant Star. Its central character is named Wieder, Carlos Wieder. First encountered in a writing workshop, Wieder later resurfaces as a Chilean Air Force captain who sky-writes his poems, and commands a military death squad under Pinochet. Seeing my surname, not a common one, again and again, wieder und wieder, left me asking what I almost never ask when reading a book: Who is this writer? How does he know me?

Born in Chile in 1953, Roberto Bolaño moved to Mexico City with his family in 1968. In 1973, he returned to Chile to make a socialist nation, but the army seized power and arrested him. Bolaño went back to Mexico, moved on to Paris, and ultimately settled in Barcelona. He wrote nine novels, two books of stories, and five volumes of poetry. In 1998, he was awarded the Romulo Gallegos prize for Los detectives salvajes. Roberto Bolaño died in 2003, aged 50, awaiting a liver transplant.

My ignorance of even canonical Spanish writing is large and longstanding. As a college student in New York in the late 1960s, with a Panamanian roommate who spent a lot of time in discotheques, I knew two sentences (both subway signs, I can't swear by my spelling): la via del tren es peligrosa (the way of the train is dangerous); and el abe que sabe vuela por Pan American (the bird who knows flies Pan American). Latin American writers meant Borges, García Márquez, Octavio Paz, and Pablo Neruda. I didn't get the jokes in Don Quixote. Modern Spain was Picasso, Miró, Salvador Dali, Luis Buñuel, Miguel de Unamuno, and Franco?which meant fascists, who murdered García Lorca. Don't forget the Spanish Inquisition.

I lived in Mallorca for a few weeks in 1975, and stopped in Madrid on the way home. Parked in a hotel across from the Prado, I spoke to no-one, passing my time with Breugel's The Hay Wain and el Bosco's The Garden of Earthly Delights. By the time Bolaño's visceral realists arrived in Europe (if The Savage Detectives' timeline holds true), I was back in New York City, in psychoanalysis with a Catalan Freudian named Quim, whose anarchist brother had been executed under Franco.

Two years ago I responded to a constellation of forces— the study of Arabic, a new Zohar translation, ditto Don Quixote, restlessness. Medieval Jewish and Arabic poetry and philosophy are a repressed memory, not just mine. My wife and I took a plane to Spain. We traveled through Andalusia: Seville, Cadiz, Ronda, Malaga, Granada. Then via García Lorca Airport, I returned to Catalonia, to Barcelona.

The Savage Detectives is arranged in three parts: The first and third, "Mexicans Lost in Mexico (1975)" and "The Sonora Desert (1996)," are the journal of a 17-year-old first-year law student and poet, Juan García Madero. His daily entries for the last two months of 1975, and then January-February 1976, bracket "The Savage Detectives (1976-1996)." This middle section, the novel per se, might be over-simply described as an oral history of the Mexican visceral realists, compiled between 1976 and 1996, as gathered through the recollections (or are they affadavits?) of individuals who crossed paths or purposes with the leaders of the movement's second wave, Ulisses Lima and Arturo Belano.

"The Savage Detectives" divides into 26 chapters (one for each letter of the alphabet). The story, or mystery, is told in the Mexico City rooms of Amadeo Salvatierra, near the Palacio de la Inquisición, over one long night in January, 1976.

Salvatierra, a minor figure associated with both the Mexican Stridentists and the visceral realists of the 1920s, supports himself as a scribe. He answers the inquiries of those he calls "three boys" into the life and poems of Cesárea Tinajero, mother of visceral realism. "Who is Cesárea Tinajero?" is one mystery pursued by The Savage Detectives. But who are the three boys? Probably Belano and Lima, but who is the third? Are they the detectives? What is a poet without poems? Is not having an answer the same as there being no answer? Is disappearing the same as dying? Why do we do what we do, and does it matter?

Over his last bottle of Los Suicidas mezcal—no longer available in stores— Amadeo Salvatierra recalls events of forty and fifty years past, and his oral history ripples outward, forward across two decades and five continents. In each of the 26 chapters, the multiple narrators are also characters, engines of the plot: poets and painters, novelists, critics, architects, anthropologists, editors, publishers, drug dealers, whores, pimps and gangsters, lawyers and heiresses, Nazis and kabbalists, body-builders, lottery winners, and Mexican Jews brought together like the thieves in The Maltese Falcon, in a quest for poetry.

Midway through the evening and the book, one of the three boys asks Salvatierra, "Where are Cesárea Tinajero's poems?" The scribe digs out the sole surviving copy of the only issue of Caborca, and shows them Cesárea's one poem: "Sión". The poem can't be quoted: it's a visual stack of three drawings. They depict (from top to bottom) a small rectangle on top of a straight line; a small rectangle on one slope of a wavy line; a small rectangle on the steep of a jagged line. Salvatierra then asked the boys what they made of this poem, which he'd been looking at for more than forty years and "never understood a goddamn thing." They answer that the poem's a joke covering up something more serious. The scribe still wants to know what it means. They think. Time passes. They talk about other pieces in Caborca. "Well, then, I said, what's the mystery? Then the boys looked at me and said: there is no mystery, Amadeo."

In "Mexicans Lost in Mexico," the December 14 entry in García Madero's journal records that no one gives the visceral realists "ANYTHING" (his caps), meaning money, column inches, invitations to party or to read. "Belano and Lima" he notes, "are like two ghosts." Then he asks: "If simón is slang for yes and nel means no, then what does simonel mean?"

Amadeo Salvatierra dispatches the detectives to interview Manuel Maple Arce, translator of John Dos Passos (really) and friend of Borges (maybe). The old man observes that "all poets, even the most avant-garde, need a father. But these poets were meant to be orphans."

All second-generation visceral realist poems are allusions, never citations. The only evidence of their existence is the memory of others. This is the contrapositive of Mandelstam's poetry, which was only preserved because others memorized it, and a variation on the Borgesian conceit that no book exists until a book is written about it.

In the case of Belano and Lima, their very existence depends upon others' memories. For good or ill:

A Latin-spouting Galician lawyer put his money in a Barcelona poetry magazine. He thinks he is a poet, a giant. Then he finds Belano (a nobody) in bed with his daughter.

A Chilean bar owner in Barcelona recounts his tale of amazing luck. This multiple lottery winner addresses Belano directly, implying that the writer is present at the transcription, if not the scribe himself.

"The Sonora Desert" picks up García Madero's journal on New Year's Day, 1976. The quest for Cesárea Tinajero ends in a fatal duel in the dust. Idling in the the bordertown of Villiviciosa, the journalist's imagination gives out. The last entry is a line-drawing riddle.

In Chapter 26 of "The Savage Detectives," Professor Ernesto García Grajales of Pachuca describes himself in December, 1996, as "the only expert on the visceral realists in Mexico, and if pressed, the world." Grajales delivers an epilogue, a "where are they now?" of Bolaño's epic cast, the living and the dead. The professor never heard of Juan García Madero, and categorically denies that he belonged to the group. Taking his leave, he observes that "there are labyrinths I prefer not to lose myself in … .  [L]et readers and scholars draw their own conclusions."

The last word goes to Amadeo Salvatierra. Disturbed when one of the three boys talking in his sleep promises to find the Complete Works of Cesárea Tinajero, the old scribe looks at the walls of his front room, at "my books, my photographs, the stains on the ceiling, and then I looked at them and I saw them as if through a window, one of them with his eyes open and the other with his eyes shut, but both of them looking, looking out? looking in? I don't know, all I know is that their faces had turned pale, as if they were at the North Pole, and I told them so, and the one who was sleeping breathed noisily and said: it's more as if the North Pole had descended on Mexico City, that's what he said, and I asked: boys, are you cold? a rhetorical question, or a practical question, because if the answer was yes, I was determined to make them coffee right away, but ultimately it was really a rhetorical question, if they were cold all they had to do was move away from the window, and then I said: boys, is it worth it? is it worth it? is it really worth it? and then one who was asleep said Simonel."