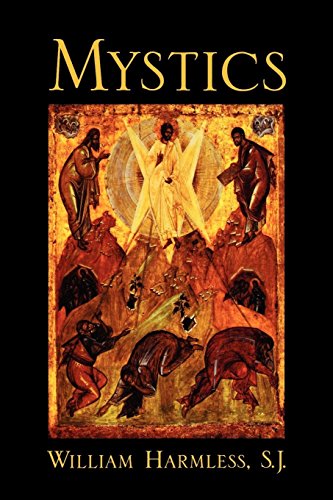 Raids on the Ineffable

A lucid account of eight mystics refutes the notion that "all religions are the same at the top."

The word mystic does not bring to mind edifying images for most Christians these days. It smacks of a vapid, Southern California mindset, readily exploited by marketers of tea and juice and such. For the more historically minded, mystic might suggest the wild–haired, unwashed visionaries off in the wilderness—not, in other words, something of much concern to everyday believers as they balance their finances or play catch with their kids.

But true mystics are far from amorphously spiritual. As Bernard McGinn has put it, "no mystic (at least before the present century) believed in or practiced 'mysticism.' They believed in and practiced Christianity (or Judaism, or Islam, or Hinduism), that is, religions that contained mystical elements as part of a wider historical whole." McGinn's work serves as the starting point for William Harmless, a professor of theology at Creighton University, whose new book Mystics is a walk through the lives and teachings of eight great mystics: Thomas Merton, Bernard of Clairvaux, Hildegard of Bingen, Bonaventure, Meister Eckhart, and Evagrius Ponticus from the Christian tradition, as well as the Sufi poet Rumi and the Buddhist divine Dogen.

Harmless opens the book by presenting two contrasting views of mysticism. In the early 15th century, Jean Gerson, chancellor of the University of Paris, wrote a two-volume treatise on the subject, the first scholarly study of mysticism. The title alone, On Mystical Theology, shows his view: Mysticism is theology, but more personal and experiential than the scholastic theology of the academy. Gerson defines this mystical theology as "an experiential knowledge of God that comes through the embrace of unitive love," and he offers a robustly evocative account of the mystics' writings: "They talk of a jubilation beyond the spirit, of being taken into a divine darkness, of tasting God, of embracing the bridegroom, of kissing him, of being born of God, of obeying his word, of being brought into the divine cellars, of being drunk in a torrent of delight, of running into an odor of his perfumes, of hearing his voice, and entering into the bedroom, and of finding sleep and rest in peace with him."

A second approach is represented by the modern American philosopher William James and his enormously influential Gifford lectures, published under the title The Varieties of Religious Experience. James believed religion to be a matter of personal experience, not ideas: "The mother sea and fountain-head of all religions lie in the mystical experience of the individual." The sacred history, tradition, scriptures, and rituals of particular religions are all local outgrowths from this universal experience, and are not necessary for understanding it. At first glance, James' approach may appear to be quite similar to Gerson's: both emphasize the experiential character of mysticism. But for James, in contrast to Gerson, theology is strictly epiphenomenal.

Harmless' own view is squarely, though respectfully, opposed to James'. Indeed, he writes, "James treats history as though it were a stream to be stepped over instead of an ocean we swim in." As Harmless leads readers through the writings of his eight mystics, he gives the context surrounding each author's writing and shows how necessary that context—in all its ritualistic, theological, and historical fullness—is for understanding mysticism.

Four of these mystics seem especially noteworthy. Harmless begins with Thomas Merton, perhaps the best-known mystical writer of the 20th century—and the most accessible, if least deep, of the mystics he surveys. Merton attended Cambridge University for a year before being sent down for doing more partying and drinking than studying, and also for fathering a child out of wedlock. After Cambridge, Merton returned to America and completed his education at Columbia, where he was baptized a Catholic. Merton set out to be a professional writer, but soon entered a Trappist monastery in Kentucky. While in the monastery, Merton continued to write, and beginning with his autobiography The Seven Storey Mountain his books became famous. In his early writings, Merton focuses on Catholic theology, advocating the practice of contemplation in a world filled with noise. For Merton, contemplation is "a sudden gift of awareness," and the quest for holiness is "the quest for one's true face" as seen in the face of God. Merton's concept of prayer, Harmless writes, "centers on 'presence'; it presumes and builds on faith; it praises without words and adores without gesture. It comes up out of the 'center'—which presumes, of course, that one has found that interior center amid the swirl of one's inner consciousness."