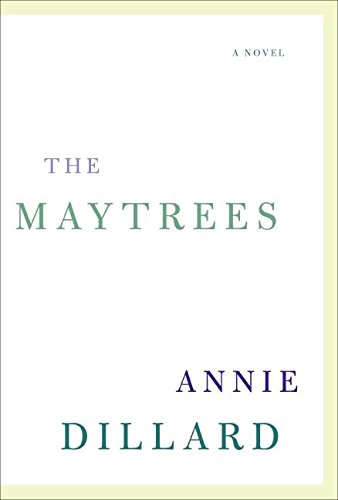 Annie Dillard has always been drawn to places and events where "eternity clips time." She is convinced, on the one hand, that we have been abandoned to time and its remorseless plowing under of all we know and love; and, on the other, that the world is shot through with glimpses of the "holy" or the "real." The tree with the lights in it from Pilgrim at Tinker Creek (1974) was an early and now famous example of such a glimpse—a backyard cedar which, one day, appeared "charged and transfigured, each cell buzzing with flame … . It was less like seeing than like being for the first time seen, knocked breathless by a powerful glance … lifted and struck." Like Emily Dickinson, Dillard has an acute interest in birth and death, convinced that at such moments the surface of time cracks open and reveals unseen depths. In For the Time Being (1999), for example, spending time in a maternity ward, Dillard memorably describes a hospital as "a hole in the universe through which holiness issues in blasts. It blows both ways, in and out of time."

Beauty and pain are often what wake the observer in her nonfiction work to the sense that there is more going on than immediately meets the eye. As she puts it in Holy the Firm (1977), beauty and pain drive the artist, "in flawed imitation of Christ on the cross," to create work which burns with an awareness of the holy, touching it almost in torment and attempting to "span the gap, from here to eternity, home." In her first novel The Living (1992), love and death awaken her characters, as in this description of two young lovers so overwhelmed with the intensity of their feelings that a sudden, crushing grief overtakes them. They feel themselves marooned in time, exiled from a hidden world they had stumbled on: "As it happened, each had never felt life's loneliness more keenly that at that moment, holding hands and singing. Each had never suffered, than at that moment, greater and more decimating loss. The strength of adult emotions was new to them. The purity and depth of their private, sourceless griefs overpowered them." For Dillard, a sense of exile seems always to accompany intimations of the holy, leaving her to ask, in many different ways, how time can be redeemed or restored, how the broken can be made whole.

These issues run under the surface of her second novel, The Maytrees, published last year and now issued in paperback. It focuses on the marriage of Lou and Toby Maytree. It is set in Cape Cod, the drama of their marriage, as Dillard puts it, "played out before the backdrop of fixed stars," "their sandspit … a naked strand between two immensities, both given to special effects." Lou is the central character—tall, silent, capable of great intensities of awareness—and we spend much of the novel tracking her consciousness. Maytree, which is what Lou calls Toby, is a poet, given to book-length efforts which allow him to display his analytical, often abstract talents. They are both great readers, their two lives lived out in the resonating company of books.

Maytree grew up in Provincetown, spending summers in a one-room board shack near the coast guard station where his father worked. Lou moved there with her mother as a girl, eventually inheriting an old beachside house. They meet and marry after the war, in the late 1940s, with the house and shack playing prominent roles in their life together. As in The Living, love lifts the two of them temporarily out of time: "They felt a pause. Theirs was too much feeling to push through the crack that led down to the dim world of time and stuff. That world was gone … . Love so sprang at her, she honestly thought no one had ever looked into it." When they do return to matter and time, it is in the company of the other, both of them newly aware of the world through the charged presence of someone else: "Their awarenesses rode waves paired like outriggers. Maytree thought Plato wrong: physical senses and wordless realms neither diverge nor oppose; they meet as nearest neighbors in the darkness of personality and embrace." Love, Dillard writes, becomes for them "an epistemological tool"—a way of knowing, continually throwing up new bits of a world broader and stranger than either had imagined alone. Included in this is their son Petie, who, in a rapid sequence of paragraphs, is born and lives out fourteen years.

All of this takes place in sixty-page prologue. Parts 1, 2, and 3 follow, with a brief epilogue. If we let the structure of the novel do its intended work, we see very quickly what its real issues are. In part 1, the marriage breaks. After 14 years, Maytree abruptly runs off with a free-spirited family friend, Deary, beginning what the novel calls the couple's "twenty middle years." Lou suffers. In an image Dillard has used in previous books to talk about the soul's line cast out to a seemingly absent God, she writes that Lou "found herself holding one end of a love. She reeled out love's long line alone; it did not catch." She is literally abandoned into time, but with the aching knowledge of something more than its unending daily erosions. Love has taught her that. She falls apart, but then she gradually begins to "let go" of the sense that the world centers on her. Inch by inch, for two decades, she gets "clean" of that sense of self and, gradually, great "distances opened as she opened." The world, visible in something like its holy intensity, rushes in as the bitter reality of exile loosens the boundaries of the self. Letting go is a response to the holy's coming and going that Dillard has frequently investigated, but Lou's version is as powerful a realization as she has ever written.

The twenty years apart pass in what seems a few pages, and part 2 describes what brings Lou and Maytree, still in love, back together. Deary's health deteriorates—in her late sixties, a leaking mitral valve brings her to congestive heart failure—and Maytree tends her. Though he never really loved her, he has honored the commitment running away with her represented, comparing it to wrapping his hands around oars on a cold sea, icing them fast, and continuing to row. Carrying her through the snow to a doctor's appointment, he slips, tosses her to safety in a snow bank, and breaks both arms, his ribs, wrist, and thumb: "His X-rays looked like the Tungsta event, the Siberian forest after a meteorite hit." Unable to care for himself or Deary, he returns to Lou, depositing Deary at the house and walking the beach at night to present himself at the shack. Lou agrees to help and, in part 3, they nurse Deary through the eight weeks of her dying, ministering to her as she "chars and buckles like a leaf." This is unexpected and deeply affecting, and it gives Dillard a way of exploring the "moral stance" that Lou had crafted out of her charged abandonment, an awareness not just of the world's brilliant intensities but of human dignity as well.

Maytree expects to leave after Deary's death, but he finds himself back in the original relationship, swept along by Lou's growth, "her immense solitude so gloriously … broached" by this series of events. More years pass. Together, the two of them, once opened to the holy and the real and then exiled from it, find themselves charged once again with restoring the world by taking a small part of it into their shared, knowing embrace: "They enfolded each other and looked over each other's shoulders at the world's wreck where all shattered, at bareness they held at bay. Or they cradled the world between them like a mortally sick child, loving it and not telling it all they knew."

This is a powerful, bare novel, with four or five strikingly realized scenes erupting out of long passages of wry, often brilliantly phrased summary. It is just the sort of novel one of Dillard's wondering, wide-eyed, word-obsessed narrators would write, once prompted to turn her attention from the world around her to those she loved and lived with.

Thomas Gardner. professor of English at Virginia Tech, is the author most recently of A Door Ajar: Contemporary Writers and Emily Dickinson (Oxford Univ. Press, 2007).