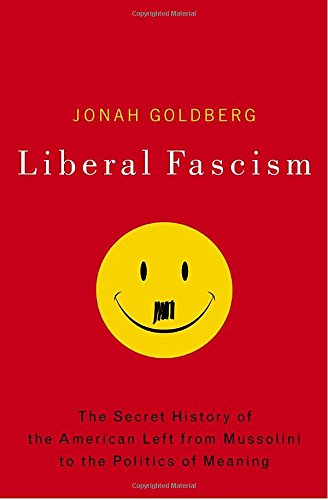 Liberal Fascism: The Secret History of the American Left, From Mussolini to the Politics of Meaning
Goldberg, Jonah
Doubleday, 2008
496 pp., 32.50

Everything You Know About Fascism Is Wrong

What Mussolini, Father Coughlin, & Co. really stood for, and why it matters.

Last year, I was speaking at a prestigious university in Washington, D.C., and brought up Margaret Sanger. Sanger, the founder of Planned Parenthood, was a racist who believed in eugenics and felt that birth control was essential to controlling the "inferior races"—i.e., blacks.

When I said this, the students looked incredulous. A couple even shook their heads; obviously I was disseminating bad conservative propaganda. Margaret Sanger, liberal icon, a racist? Please.

The historical record on Sanger is clear. Yet those who refuse to acknowledge her commitment to eugenics are impervious to evidence. They are the same ones who will be shakingtheir heads at Liberal Fascism: The Secret History of the American Left, From Mussolini to the Politics of Meaning, the devastating new book by Jonah Goldberg, an editor at National Review. The sad paradox is that the more the Left rend Goldberg apart, avoiding the book like anthrax because they assume we are in Ann Coulterville, the more they will make his point.

Goldberg has marshaled a staggering amount of evidence to conclude, as the first chapter has it, that "everything you know about fascism is wrong." Mussolini was weaned on anarcho–socialism (his father Alessandro was a socialist and anarchist). Mussolini and the Italian Fascist party were, in the early years, not anti–Semitic—in fact, the party included Jews. As a young man, Mussolini had carried in his pocket a medallion of Karl Marx, whose influence—combined with the bizarre syndicalist philosophy of George Sorel and a Nietzschean contempt for Christianity—resulted in Italian fascism, a mix of myth–making, prophecy about the rise of the working class, and a relentless determination to aggrandize more and more power for the state. German fascism was not far different, which is why Hitler himself, as Goldberg puts it, was "a man of the left."

In short, the very term "fascism" has been misused for decades now. Although on several occasions Goldberg openly invites criticism, admitting that he is not a professional historian, he has done the work of a historian; besides, he is a much better writer than most historians. And the case he makes is as persuasive as it is provocative. Consider Father Charles Coughlin, the "radio priest" of the 1930s, a touchstone of right–wing evil for liberals. It turns out that Coughlin actually advocated collectivist, anti–capitalist theories that were much closer to the left than to the right. Goldberg quotes leftists—among them the "New Deal Priest" Msgr. John Ryan—praising Coughlin. Coughlin became FDR's bitter foe because FDR's collectivist policies did not go far enough.

Fascists have often called for the overturning of religious tradition, to be replaced by the dictatorship of the people; have engaged in a "cult of action" that sought to smash the bourgeoisie; and have relegated certain people and races to the dustbin of "inferiority." Considered this way, the radicals of the 1960s fit quite snugly into Goldberg's thesis.

Goldberg does stumble with his shoulder–shrug at gay marriage, which he supports. For once in this mesmerizing book he fails to apply his model. Gay marriage activists, after all, have all the trademarks of fascism, and more. They want to control the courts and inflict their philosophy on the reluctant bourgeoisie. They are obsessed with "street action" and protest, and contemptuous of Christianity. They have turned homosexuality into an exalted state, often claiming that gay people are more sensitive and enlightened than others.

While the Left will claim that Goldberg thinks that everyone he disagrees with—from FDR to Hillary Clinton—is a fascist, this is not true. Progressives, he notes, are not building concentration camps. Hillary Clinton wanting universal health care is not Crystal Night. But by reexamining the history of fascism and its pathologies, Goldberg shows where the fascist impulse—to smash the past, accumulate power, and create utopia—is most likely to resurface.

Mark Gauvreau Judge is the author most recently of God and Man at Georgetown Prep: How I Became a Catholic Despite 20 Years of Catholic Schooling (Crossroad).