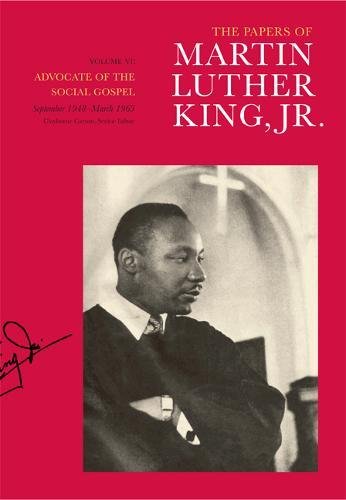 At Heart, a Baptist Preacher

The latest volume in The Papers of Martin Luther King, Jr., draws on previously undiscovered materials to illuminate his powerful preaching ministry with new depth.

To discover important new primary material relating to a long–studied figure must be every scholar's daydream. A phone call comes; someone has found something in the attic or basement—an unknown manuscript, a diary of travels, a box of letters. A study of the new material then deepens understanding in some vital area of research that up until now has received little attention.

This dream became reality for Clayborne Carson, senior editor of the King Papers Project, in 1997 when Coretta Scott King allowed the Project to search through boxes in the basement of the house that became the King residence in 1965. In a dilapidated cardboard box, the Project found a private file containing more than 200 folders of handwritten sermon outlines and drafts, in addition to previously unpublished student essays and personal correspondence. While Volumes 1 and 2 of The Papers of Martin Luther King, Jr., published in 1992 and 1994, explore King's student papers and academic development, little was known before 1997 about the role Crozer Theological Seminary and Boston University played in shaping King's preaching ministry. The recently published Volume 6, Advocate of the Social Gospel, September 1948–March 1963, interrupts the chronology of the planned 14–volume series and retraces periods already examined in the previous volumes in order to present these newly discovered, unpublished sermon materials and to examine King's how King developed his distinctive sermons.

Indeed, this volume offers a superb course in homiletics as it leads the reader through King's process of outlining, sketching, refining, and expanding his most famous sermons, with ample commentary on King's insights into the practice of preaching. As such, this volume is a resource not only for historians of King and academic theologians but also for pastors.

King teaches us at least four lessons about preaching through this volume. First, revise and reuse. King continually revised his most effective sermons. He prepared many of the documents selected for this volume in classes at Crozer Theological Seminary, and he repeatedly drew upon these sermon outlines and introductions while serving at Dexter Avenue in Montgomery and Ebenezer Baptist in Atlanta, and while preaching in cities across the nation.  The majority of this massive volume is devoted to the "Papers," the primary materials themselves, which begin with sermon sketches, introductions, and conclusions from Crozer Theological Seminary. With titles such as "Why Religion?", "The Misuse of Prayer," and "What is Man?", these sermon intros and conclusions read like Pascal's Pensées. In the sermon conclusion for "Facing Life's Inescapables," King writes, "This is the conclusion of the whole matter. We can't escape ourselves; we can't escape sacrifice; we can't escape Jesus. We had better accept these as the great inevitables of life." By providing a number of charts illustrating the development of King's most distinctive sermons over a period of five to ten years, the editors make it easy to trace additions and changes in these texts.

Second, King filled old wineskins with new wine. He weaved both fresh biblical insight and commentary on contemporary events into the already prepared outline or text. In doing so, King succeeded in carrying out what Dietrich Bonhoeffer described as the task of all faithful preaching: speaking the concrete Word of God in the concrete moment.  The robust 45–page editors' introduction provides a detailed narrative of what King was preaching as history unfurled—as the U.S. Supreme Court issued its decision on Brown v Board of Education, as an all–white southern jury acquitted the man on trial for the murder of Emmett Till, as the Montgomery Bus Boycott rolled on indefinitely. The same month the U.S. Supreme Court delivered its first decision on Brown, King preached a sermon entitled "Mental and Spiritual Slavery." While he first compares Pontius Pilate with many white Christians who are "enslaved to the crowd," he then says to his black congregation, "Now it is easy for us to look back and condemn Pilate for such an action, but we must also see that many of us are just as much victims of this sort of thing as Pilate." Aware of the sometimes unbearable pressure to conform to southern racial mores for the sake of personal safety or job retention, King encourages the parishioners to side not with Pilate the conformist but with Jesus who transformed history. Then, in his September 1955 sermon, "Pride vs. Humility," King speaks of the tendency to substitute sentimental worship for active discipleship. He says, "That jury in Mississippi, which a few days ago in the Emmett Till case, freed two white men from what might be considered one of the most brutal and inhuman crimes of the twentieth century, worships Christ." And in January 1956, one month into the Bus Boycott, King delivers the sermon, "Our God is Able," and says, "Much of my ministry has been given to fighting against social evil. There are times that I get despondent, and wonder if it is worth it. But then something says to me deep down within, 'God is able. You need not worry.' So this morning I say to you [that] we must continue to struggle against evil, but don't worry. God is able. Don't worry about segregation. It will die because God is against it." Such texts illustrate King's characteristic ability to speak biblical and theological truths boldly in and for his contemporary moment.