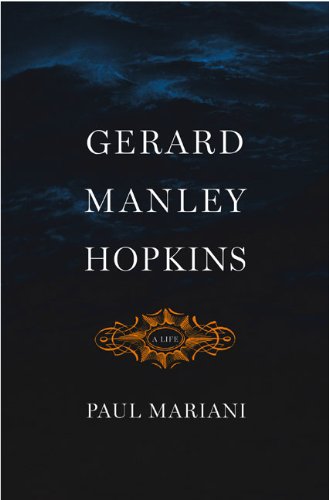 Paul Mariani's biography of Gerard Manley Hopkins provides extraordinary insight into the craft and faith of a great poet.
December 2008

Early in the 1990s, two major biographies of Gerard Manley Hopkins, Jesuit priest and Victorian poet, were published in as many years. The first, Gerard Manley Hopkins: A Very Private Life, by Robert Bernard Martin, was driven by the thesis that Hopkins was a man in psychological anguish. Martin combs through Hopkins' letters, journal, and poems for evidence that he was tormented by unfulfilled sexual desires and oppressed by obedience to an exacting religious order. The second, Hopkins: A Literary Biography, by Norman White, took a gentler tack and focusing instead on literary influences and detailed explications of the major poems.

Both of these biographies are interesting reads and valuable (Martin's is, perhaps, more valuable for what it tells about the current state of literary criticism than for what it tells about Hopkins' life). Both, however, have a major deficiency. Neither of these biographies has a very telling or thorough account of Hopkins as a person of deep religious conviction, a man steadfast in his decision to serve Christ and the Church through devotion to a religious order. This deficiency is amply made up in a new biography by Paul Mariani, Gerard Manley Hopkins: A Life.

Mariani, himself a Catholic poet as well as a distinguished biographer who has taken on figures as various as William Carlos Williams, Robert Lowell, and Hart Crane, seems ideally situated to represent the complex fullness of Hopkins' faith and craft. From its dedication page, this biography displays Mariani's sympathies: it is dedicated to his son, a Jesuit priest. And the thematic center of his narrative is neither the personal nor the literary but the religious. Whereas Martin begins with Hopkins' parents and conjectures about the significance of his middle name, and White with the entrance of Hopkins' poems onto the public stage in 1918, Mariani's point of departure is Hopkins' decision to join the Catholic Church.

Mariani offers more than a neutral account of Hopkins' religious convictions; he offers a fellow poet's celebration of them. It is not only this centering of the religious in Mariani's narrative, however, that makes the tone of his biography different from Martin's or White's. Mariani also makes two unusual choices as a biographer: he writes in the present tense, and he rejects explicit editorializing in favor of a highly original kind of paraphrase, a technique already in evidence in his earlier literary biographies.

Mariani's narration of Hopkins' arrival in Wales, the place where he was happiest and produced some of his best-known poems, is simple: "He is met at the small cathedral town of St. Asaph by Henry Kerr and Louis Bodoano, who escort him back through wooded, flower-laced lanes by trap to the imposing new-Gothic gray buildings that make up the Jesuit theologate at St. Beuno's. In his sparsely furnished room he finds a jar of scarlet geraniums placed there by Francis Bacon. The following day he writes his father. Everyone here, he notes with relief, has been 'very kind and hospitable.' " The present tense makes poetry out of a catalogue of events. A man is met. He is escorted. He finds a jar of geraniums. He writes a letter.

Martin and White tell the reader more. They tell us how to understand Hopkins' arrival. Martin supplies a comparison: "His sense of being at home had begun on his arrival at the station in St. Asaph, so markedly different from his tardy and awkward entry to the novitiate at Manresa."  White gives more details about the two men who welcomed Hopkins and then launches into a paragraph of description of the countryside surrounding St. Beuno's. Mariani tells his readers less, but is able to illustrate more.

This is not to say that Mariani's biography is spare in every respect. When it comes to Hopkins' theology or his poetic theory, Mariani is more than thorough. Summarizing Hopkins' journal from a time when he was developing his distinctive poetic theory, Mariani writes: "But by approaching the inscape of a word and its definition in this impressionistic manner, the word becomes bifurcated and unwound, and this, Hopkins sees from experience, is the less useful way of approaching language. What he wants, rather, is to contemplate 'that which is expressed in the object.' It is the intellectual attraction 'for very sharp and pure dialectic or, in other matter, hard and telling art-forms.' Not the fuzzy or suggestive, then, the mere impression, but the sharp-edged brilliance of the thing itself."

As this passage suggests, Mariani's biography is slow-going. He will paraphrase a journal entry, a sermon, or a long letter, incorporating short quotations from Hopkins and sewing them together with his own prose. Since Hopkins' prose is beautiful and difficult and his ideas complex and odd, Mariani's decision to paraphrase rather than explain will alienate some readers. This biography is not an ideal introduction to Hopkins—for that, one might pick up Ron Hansen's novel, Exiles, reviewed in the online version of Books & Culture in May.  But for those willing to savor Hopkins striking phrases and ideas, Mariani's approach is rewarding.

The decision to paraphrase rather than summarize and explain has a couple of other advantages. First, it allows Mariani to speak as a poet. Borrowing Hopkins' words and blending them with his own, he creates a prose poem in the guise of a biography. Describing Hopkins' visit to a limestone chapel on a hill near St. Beuno's, he writes: "This is the Rock, 'a great resort of hawks and owls,' and one fine May day three years from now he will inscape a small hawk called a windhover circling the fields, capturing the mastery of the thing striding high there above him in stressed lines of rare and exquisite delicacy." Mariani lifts several phrases from Hopkins' poem, "The Windhover," thus creating a moment of pleasurable recognition for readers familiar with Hopkins' poetry, who will find such moments on nearly every page of this book.

A second advantage of poetic paraphrase is that it allows readers to come to their own conclusions about some controversial aspects of Hopkins' life. For the past twenty years, there has been a debate in Hopkins scholarship over the extent to which unfulfilled homoerotic desire was a shaping influence in his poetry and a contributing factor to the misery he felt in the last five years of his life. Martin's biography contributed to this debate.

If the surviving record of Hopkins' sexual inclinations is slight, the record of the deep despair he felt in the last five years of his life is not. Explicating Hopkins' poetry from this period, Mariani explores both the possible depths of psychological anguish and the consolations of the faith. He riffs on one of Hopkins' unfinished sonnets from this period: "How measure our own descent into the dizzying depths of the self? What metaphor shall we use against those interior yawing sublimities? The pain of separation from God, like an incessant throbbing in the brain, and nothing for it."

Hopkins' life was tragic. He died too soon, before poetic fashions changed enough for anyone to appreciate his brilliance—nearly thirty years before any characteristic poem was published. He died of typhoid fever, at age 44, completely unknown and misunderstood even by his friends, never fully recovered from the depression that plagued his worst years in a pestilent Dublin.

Given this tragic arc, it is Mariani's gift to Hopkins' readers that he sees and articulates the theological convictions Hopkins never abandoned.  Near the end of the volume, Mariani explicates and reflects on the poem, "That Nature is a Heraclitean Fire and of the comfort of the Resurrection," drawing out Hopkins' comfort in the incarnation and the consequent gift of immortality: man as "immortal diamond." Mariani concludes, "heaven must still be applauding that day Hopkins penned this poem with its extraordinary linguistic insight into the adamantine inscape of mankind's immortal spirit."

So too we should applaud the day on which Paul Mariani completed this biography, with its extraordinary insight into the craft and faith of a great poet.