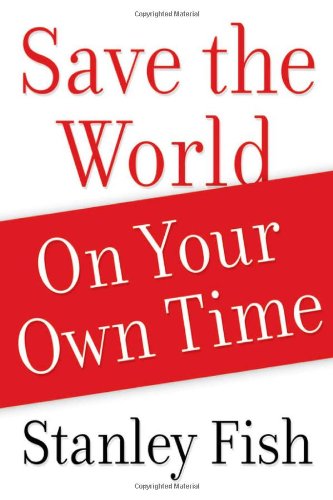 Stanley Fish argues that advocacy has no place in the classroom. Is he right?
August 2008

Last year, I sat with three friends discussing what it was we did (or would do) as English professors. We talked about writing and reading skills; we talked about appreciating literature; and then one person suggested this: "We're teaching students to be secular humanists." She laughed. She was joking, but not entirely.

If Stanley Fish had been present, he would have been furious. In his latest work on higher education, Fish argues that academics need to leave their proselytizing behind. Professors are not in the business of urging politics or values. Their only job is to introduce students to bodies of knowledge and equip them with analytical skills. That's it. Teachers analyze; they do not advocate—not, at least, in the classroom.

Coming from one of the premier postmodern theorists—someone who helped convince us that nothing is neutral—this position seems somewhat remarkable. In 1991, for example, Fish argued that religious people should accept no place in the academy because their firm beliefs were not open to a marketplace of ideas. George Marsden responded in The Outrageous Idea of Christian Scholarship that "Christians and non–Christians can readily share basic standards of evidence and argument." The classroom is a context requiring certain forms of behavior and restraint: "in the very nature of human life," Marsden wrote, "we routinely move from one field of activity to another, each with its own set of rules." Fish, it seems, now agrees. In life, he writes, "we refrain … from inserting our religious beliefs or our private obsessions into every situation or conversation no matter what its content." The classroom, likewise, calls for restraint. It is not a place for partisan politics—even of the most bland and seemingly universal sort, like "tolerance." We do not teach tolerance, says Fish, we teach physics or poetry or psychology: bodies of knowledge, sets of skills.

To the extent that professors do try to advocate in their classrooms, Fish thinks the political Right actually has a valid critique. But this book does not befriend the Right. In various places—and with excellent clarity and skill—Fish shows just how much propaganda some conservatives use to caricature the university as a center of leftist indoctrination, and how much damage that campaign might do. His response to both Left and Right is simply to cease and desist; politics do not belong in the academy.

Fish's central claim seems reasonable. But as is often the case, he refuses to temper, moderate, or nuance his position. Instead, he employs a tone that invites rebuttal. When teaching composition courses, I often write the following advice on student papers: "Don't alienate readers you may want to persuade." I want students to read opposing views charitably, give up unimportant ground, qualify arguments, speak modestly, and nuance their claims. Fish, it seems, does not believe in such maneuvers. Instead, his tone implies that everything is simple: we just need to get with the program.

Such a tone emerges through stylistic choices (paragraphs composed of the single word "wrong") and argumentative method. Fish uses logic like a steel cage: no matter which way we turn, we face his unbending bars of reason. The trouble is, his cages often contain only large prey, obvious examples. It's the small prey, the difficult cases, the details that continually slip through the bars. For Fish, everything is so straightforward that it can be said with a grumpy harrumph! But in reality, these issues aren't straightforward, and the harrumph only makes people want to disagree. Even if the logic were airtight (it isn't), readers might spend all their time looking for a hole rather than accepting what is said and changing their behavior. Fish, it seems, has perfected a voice that often forgets the reason for academic speech: not to pronounce, but to persuade.

Indeed, Fish would be both more persuasive and more accurate if he took a little more time and care. He makes plenty of distinctions, but the blurred lines never get fully worked out—partly because Fish does not seem to believe there are blurred lines.

Take, for example, the distinction between analysis and advocacy. What if, in the academic search for truth, a professor determines that a position is or isn't reasonable and teaches that to students? Doesn't that advocate while analyzing? Apply this to the test case of evolution. In America, evolution is as much a vexed political and religious issue as it is a scientific theory. So what should a scientist teach? Analyzing why evolution makes sense and laying out its evidence necessarily constitutes a kind of advocacy. Nor would Fish have the scientist balance such a view with an equally affirmative analysis of creationism; the discipline, the rules of evidence, the body of knowledge does not support creationism. As the scientist "academicizes" the issue, therefore, he or she also urges it on students by the very process of analysis.

Or take the "bodies of knowledge" that professors pass on. Teaching involves selectivity: time is limited, and a teacher must choose what materials are most worth studying. But that choice involves commitments which are never purely academic. I am a religious person, for example, and I never urge a religious position on my students. Well and good. But in a course I teach about higher education, I include a week on "Religion and the University." This is a properly academic topic which I duly academicize, but it is no accident that my secular colleague and friend, teaching a very similar course (we designed it together), has no such topic on her syllabus. Who is doing the teacher's job properly? I would argue that we both are, but who we are determines what we find important and thus, in part, what we choose to teach.

Fish never gives these blurred lines adequate attention. Instead, he builds the wall even higher, maintaining a strict separation between classroom and life: "Civic capacities," he suggests, "won't be acquired simply because you have learned about the basic structures of American government or read the Federalist Papers (both good things to do)." It's the parenthetical comment that needs further explanation: why is it a good thing to read these documents? Fish refuses to provide an answer that relates to values, ethics, civics, or behavior: these documents are good to read because they are good to read. But certainly it might help one's civic capacities to read these documents—and that's one very good reason for reading them.

Indeed, I would maintain that there is a link between learning and life, and it is one that should never be abandoned, ignored, or forgotten. It is not severed by unrealistic boundaries; it is not contained by simply "academicizing." The link persists, and, I believe, it is the duty of professors to insist on that link while exploring a body of knowledge and conferring analytical skills (skills that one might use, for example, in life). The danger arises when professors try to do this linking for their students. And there, I agree, we need to practice restraint.

The model I am proposing can be demonstrated by a certain ethics professor I know. It would take ethics out of ethics, it seems to me, should we claim that its study in the classroom has no relation to life. This professor keeps that link alive. During her course, she introduces students to a body of knowledge and she confers skills, just as Fish would have her do. Then, at the end of the course, she commits what Fish would consider a breach of duty: she tells her students, "Now determine which system is right—and live it." She does not force her ethics on the students, but she does claim that what they have been studying throughout this course is nothing less than how to live.

What we look for in education is not just a good argument, but a good life. As such, it necessarily involves whole people in a search for the whole truth. That is what makes education so important—and why it requires so much restraint.