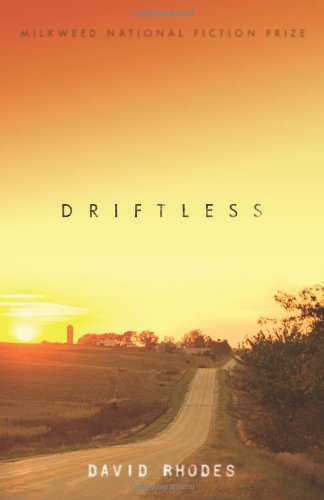 When David Rhodes' second novel, The Easter House, was published in 1974, critics compared it favorably to Sherwood Anderson's best work—no mean feat for a writer then in his twenties. But the differences between the two writers are as instructive as the similarities. Anderson's characters could barely wait to get out of the Midwest. Driftless, Rhodes' new novel, is an act of loving and intelligent attention to those who remain.

But wait, you say, who is David Rhodes? (I love answering this question.) Before he lapsed into a thirty-year silence, Rhodes wrote three of the best novels of the 1970s—wild, unclassifiable fables that have the texture of dreams. In The Last Fair Deal Going Down (1972), he posits the existence of a secret hellish city underneath Des Moines, a place created from the suppressed emotion and unstated guilt of all those taciturn, stoic Great Plains communities. There are so many ways this premise could have gone wrong—it could have read like Max Weber by way of Dean Koontz—but Rhodes renders it in such detail that it never pales into mere allegory. The Easter House is even better: a study of existential free fall, in which a drifter named C marries a woman named Cell, and they make their living overseeing a junkyard, which grows into an enormously profitable off-the-books swap meet. Like several of Rhodes' heroes, C tries to live without any of the ordinary human inhibitions and connections—he doesn't even want any other letters in his name—so it's his bad luck that he inhabits a novel where even the background characters are so interesting that I, at least, wouldn't be able to ignore them if I tried.

Both of these novels feel of a piece with the so-called New Fiction of the early '70s—they're surreal, comic-booky, and occasionally nightmarish, like some of the works of Gass, Barth, Barthelme, Hawkes, and John Gardner. But where many of these writers' characters are translucent—we see right through them to some set of philosophical issues they're meant to raise—Rhodes' are opaque: we believe in them and their histories, in their families and their strange, histrionic gestures, without fully understanding them. This is even truer of Rock Island Line (1975), a novel that eschews the overt magic realism of its predecessors and winds up being both more magical and more real. Rock Island Line takes July Montgomery (a minor character from The Easter House) and puts him through hell: orphaned as a young boy, July runs away to Philadelphia and (like C before him) tries to live without emotional entanglements. We see the psychological explanation for his behavior (he doesn't want to be hurt again, etc.), but we also recognize that there are larger, more interesting issues at stake in July's experiment (for that's exactly what it is)—his attempt is also Thoreau's attempt in Walden, to reduce life to its essentials. Who wouldn't like to know how that turns out?

The book has a tragicomic quality that is incredibly difficult for any writer to sustain. It follows July from misery to elation and back again (and again), while rendering all of these states with the sort of fresh and particular observations that make it seem as if nobody has ever written about love, or anger, or grief, or joy before. Here, for example, is July, winding up a phone conversation with the woman he's trying not to love:

"Goodbye," he said and tried to climb into the receiver after her voice in that second before she hung up. Then the hissing stillness. He let the cradle down with his finger and fitted the round earpiece into it, disengaging himself from it as though it were a delicate package-bomb. He backed away and stood in the doorway … . For an instant it was as if he could see through things, the bed, the bathroom door, the refrigerator.

Notice how illogical, but utterly believable, July's feelings are: the slightly scared carefulness with which he replaces that phone receiver, the sense of sudden X-ray vision. Rhodes' method here is the same as Tolstoy's. He uses utterly plain, direct language to let the bewitching strangeness of micro-emotions—those instantaneous reactions and imaginings that we summarize, for convenience's sake, under abstract headings like love or fear—stand out.

The book has an odd structure. It begins with the story of July's grandparents, Della and Wilson Montgomery, whom we meet on the first pages, rocking a porch swing "slowly and conscientiously … like cautious, quiet children." (This opening passage was so good that John Gardner, no pushover, later cited it as an example of the importance of a writer's "eye" in his On Becoming a Novelist.) We learn of July's family, his town, long before his birth. This is not what most novelists would do, but Rhodes knows exactly what he's after. Once we know July's family, we also know the specific gravity of his memories. We know why their weight on him is intolerable—and inescapable. They haunt us as they haunt him.