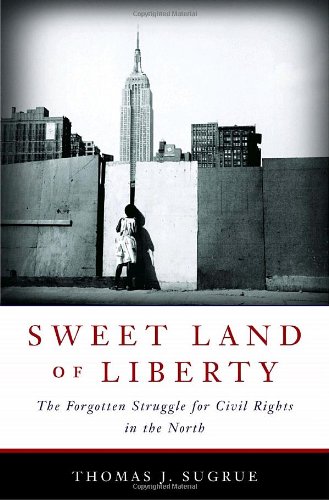 Post-Racial America? Not Yet.

Why the history of the black "freedom struggle" remains all too relevant today.

There are few urban myths more deeply rooted than this one, but it is fatuous. As Sugrue systematically shows, northern segregation was anything but an accident of market-based individual choice, but was instead deliberately fostered through discriminatory policies in banking, mortgage, "urban renewal," and education. And while southern segregation could be dramatically confronted through lunch counter sit-ins and the like, it proved far more difficult to challenge real-estate redlining, federal home loan guarantees that virtually mandated a racially segregated suburbia, and neighborhood schools that defended white racial privilege as a democratic right.

Sugrue returns throughout the book to the systemic roots of racial and economic inequality, and the deep interconnections between the two. Before the 1950s, a powerful alliance of religious idealists (including remarkable individuals such as Anna Arnold Hedgeman, James Farmer, and the founders of the Congress of Racial Equality and other civil rights groups) and secular activists (usually Socialist) empowered a variety of movements that simultaneously attacked racial and economic inequality. In their journey from "uplift" to "militancy," they brought struggles for equality to a national audience and provided a model for a future generation of southern civil rights protestors to follow. Religious activists played a far more central part of the struggle in the North than most understand. As a result, religious figures people this work to a degree that surprised even me. The very first chapter, for example, a beautifully rendered mini-biography of Anna Arnold Hedgeman, is alone worth the price of the book. The contrast with another recent book of note, Glenda Gilmore's Defying Dixie, is striking, for Gilmore's story of the long history of the southern civil rights movement excludes religious figures almost entirely, focusing instead on black secular radicals. Thus, the historiography of religion in civil rights scholarship has shifted dramatically, as evidenced by a comparison of these two landmark works.

Yet this religious-left alliance did not, and could not, survive the pervasive anti-communism of the post World War II years; nor could it match up with the powerful psychological arguments put forward in Gunnar Myrdal's An American Dilemma and by social psychologists who discovered that demonstrations with black dolls worked even in arguments presented to the Supreme Court.

Sugrue argues that while "Depression era activists situated racial inequality in a larger context of power relationships and economic inequality," postwar social scientists "saw prejudice as the manifestation of psychological or emotional deficiencies." Social scientists also focused on black internal pathologies deriving from psychological responses to white racism. Religious leaders of the time, Sugrue points out, made their peace with the rising emphasis on psychology, for "psychology easily segued into spirituality." Thus, while a previous generation stressed economics, the liberals of the post-war era focused on personal relations, through such feel-good exercises as Brotherhood Sundays and race relations seminars. We see here, of course, the roots of the current corporate industry of "diversity training," based on the presumption that group therapy will solve structural inequalities.

Sugrue's sympathies throughout lie with those who understood the economic roots of racial inequality. For that reason, unlike many authors who discuss black power and the social movements of the 1960s, Sugrue finds these approaches wanting as well. The emphasis on community control and autonomy overtook a previous thrust towards large scale, integrationist, and regionwide solutions to racial inequality. Johnson's War on Poverty, with its Community Action Programs, furthered a trend towards the devolution of national anti-poverty programs to local community and nonprofit organizations. The Black Power cries for racial pride and black capitalism (shared by members of the Nixon Administration, who knew economic conservative thought when they saw it) furthered this kind of localism, and damped down a previous generation's push towards addressing the causes and consequences of systemically produced inequality.