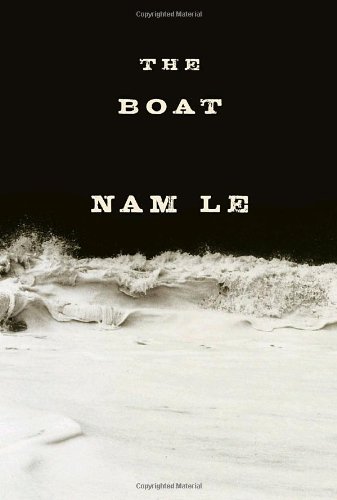 Stories That Open the Heart

Nam Le's characters may not be from our hometown, but they belong to our family.

Confession being good for the soul, here it is: my (hitherto) secret method of evaluating a new book. I close my eyes, open the book, and jab my finger at a line, then read. One sentence. Pass/fail. Up/down. Stunning/deadly. It tends to separate the men from the boys. (In the spirit of full disclosure, I should probably admit my second mode of evaluation is to read the book two or three times over.)

And so I close my eyes and open the new short story collection, The Boat, by Nam Le. I jab my finger on a line and open up my eyes to read: "The stars are under us and above, a sky like dirt." A second try: "This primped wording, this deadpan goodness." A third: "The air a mix of gray and green, before the night came down." And so, page by page, or better, moment by moment, through this lovely book a lyricism courses. Here is writing that understands full well how language buoys thought, how worded beauty honors story. We can, I think, too often be swept up by compelling narratives, and fail to stop to credit charms and spells, enchantment in the things the words are made to do. I want to say, there's magic here.

The writer Nam Le was born in Vietnam and raised in Australia, but the seven stories in this collection tell of natives of not just those locations, but of Tehran, Columbia, New York City, the Iowa Writers' Workshop, (that foreign land), and finally Hiroshima just before the bomb is dropped. And while the stories share no single character, location, culture, plot, or voice, the reader can't help being haunted by a sense that it is a single story this book tells, a large and worthy story, one pleasant to anticipate reading over and again.

"Meeting Elise" is narrated by an aging artist, who has at great expense remodeled his New York City dwelling in such a way that he emerges naked from his bath on full view to passers–by, is at other times all but invisible in restaurants, on crowded streets, and later in the concert hall where his estranged daughter has her acclaimed American debut. Her cello, "a contraption of wood and steel and hair," is silent when the concert's over, the daughter "bowing, neat, precise." She is "floating out there on a skiff of light." In her "severe beauty," the narrator realizes, his daughter "has everything she needs. She has wrung all my weaknesses out of her strong, straight body." He leaves the theater alone. It's raining as he walks out into the night. And there he spots this daughter he has never known "in the walk of a young boy, in the languor of a twenty–year–old—no there—at fifty, on a billboard. Eyes gray. Smile gas–blue. I count her as she passes."

Many writers of short fiction have a favorite story. Alice Munro, that writer's writer, mentions Maeve Brennan's "Springs of Affection" as her own. Those not yet committed could do worse than to choose Le's story "Cartagena." It is the business of art, I think, to open up our hearts to worship. Beauty of form reflecting beauty of the Holy. Beauty of substance telling Truth. (Keats knew a happy marriage when he saw one.) I could easily name, when asked, "Cartagena" as my own favorite until such time as someone writes a better narrative of giving one's life for his friend, of dying to self—that sweetest, meanest of surrenders—and of knowing resurrection morning, when "As the sun rises you can see," "against the steel gray water," "that each small, black shape is a man." I read the final paragraphs and tears attest that heaven is not clouds and harps, but men and fish and fruitful labor.

No cheap grace here. We are told this story by a 14–year–old hit man in Columbia. The crafting perfect to the last detail. There's dialogue, but there are no quotation marks. Nothing is so clearly boundaried as that. Not thoughts and words, and for dead certain, not harm and good. The so–young hit man's tone and voice are counterpoints of his daily causing/fearing death. "I come here to feel nothing," he says, to "The streets of headstones." The killer's acts are chilling, while his thoughts are eloquent. The story's ending/beginning is, as they say, breathtaking. Life–taking. Life–making. It is I think what fiction telling Gospel wants to be.

Le's work understands salvation comes at great, not–always–willing but always–chosen, cost. The book is powerful because Le translates theology (mine; I am not saying his) to story, and it is by story best of all that we are taught and sometimes changed. I struggle with the notion of superimposing meaning on the work of artists whose worldview is not Christocentric, as Le has said that his is not. But then there comes the pesky question about authorship. If we posit there is Truth, (with the biggest "T" in town)—which I not only posit but insist upon—and if that Truth is displayed when and where and how God will, I have no problem whatsoever in believing Truth shows up all over. There are steely certain aspects of the Gospel, central tenets of this faith, that can transfuse prose for our instruction and delight. And I do not put transfusions down to happenstance. Like I say, Authorship.