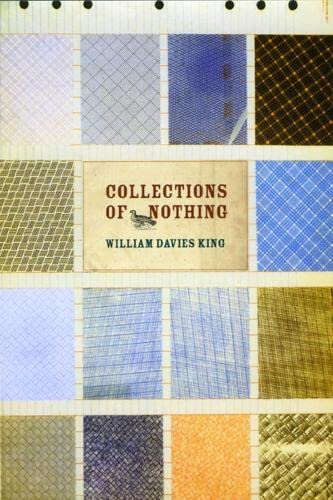 "To Collect Is to Write a Life"

Intimations of hope fulfilled in the memoir of a man who treasures trash.
July 2008

William Davies King, author of a quite wonderful new book, Collections of Nothing, has collected by his own estimate something in the neighborhood of 18,000 labels.

We're talking food–packaging labels, amiably sharing shelf space with say 500 crown bottle caps, and what may well be the world's most significant collection of "Place Stamp Here" boxes cut from the upper right hand corner of envelopes, an assemblage not to be confused with King's hundreds of snipped bits of lining cut from security envelopes. Who knew there were so many patterns? Who cared? King, for one, and very possibly his collected readers by the time he's finished with us. King says we each throw away a ton of trash a year, and inasmuch as his collection weighs a mere two tons, he is by definition disciplined.

Emboldened by his example, I have begun a little collecting of my own. I don't want to brag, but it could be the world's largest collection of William Davies King quotes. Not too shabby, seeing as I just started collecting a week ago. And he, who has no patience whatsoever with the persnickety demands of stamp albums and pre–fab stick–on labels, won't fuss, I think, if I display them any way I like. If King believes anything, it's that the collector can do what he jolly well pleases with his whatever occupies his shoeboxes.

So. My collection. The order and the asterisks, my own.

* "The completion of the world of the collector is the summation of all that is still wanted, the totality of expectation."

* "Collecting is 'religious' in the etymological sense of gathering or binding together again. Precious objects coalesce, and the divine (or the diabolical) is there in the collectible. Collecting is a form of sorcery (or prayer)."

*  "Life marches on, while collectors trail behind, carrying a shovel and a sack."

*  "Collecting is a constant reassertion of the power to own, an exercise in controlling otherness and finally a kind of monument building to insure survival after death."

* "You can often read the collector in his collection. To collect is to write a life."

* "We are born wanting to be had and held, born collectible, and with a little luck we never stop being prize possessions. But with self–knowledge comes self–doubt, and never more so than in the exchange that comes with relationship, taking an other and giving oneself. Above all, are we dear?"

* "Collecting constantly exclaims a series of losses. An old clock in a collection does not so much tell time, as it tells of time, and the tale is a sad one."

* "My love life did not include myself."

* "The first thing I needed to do was collect myself."

* "I fear there is that essential emptiness inside it all, a basic absence which I obsessively try to fill."

* "My collection answers to a different god within the object. In a sense I'd call it the god Not There, the absence of immanence."

* "I was seeking something adequately low to constitute a world I could stand above, my kingdom, lordly over it."

* "The means of organization had to do with a personal experience of nothingness, coming from hollow afternoons, uneventful evenings, and nights alone … trying to guard against becoming a Person Who Was No Person."

* "After years would I learn to cherish my own hold on life, thumb–printed, chemically degraded, time–worn and cracked though it might be."

* "I've been buying freedom from myself, and it has not been cheap."

* "The compulsion to collect is a struggle against death."

* "The overwhelming odds are you'll lose money in the game, you'll die in this life. I played the longest gamble of all by choosing to ante nothing, again and again, at a table by myself."

* "I want to believe some better end to the story can be found."

There you have it. And that's just my first album. Let me jump right in here and refuse to be accused of attempting to sum up the man and his collecting ways. That could not be done. Though King himself comes awfully close to summing up all men and our collecting ways. He names our longing, shows us photographs of empty spaces, lets us listen to the hollow sounds in vacant rooms. As much as this (at times almost surreal) examination catalogues the things that King and other people stockpile and amass, it is more truly an examination of the spaces so in need of something, of the emptinesses a life will try to fill. One strength of this compendium, so stark and strong and honest, is that it does cause us to consider whether the existence of the empty spaces might just posit the existence of something meant to fill them.

This is one nice writer. King writes of his collection of large boulders, "In the spring, lush green would arabesque salty gray. By late summer, the grass would turn sharp and sallow amid the seemingly liquid rocks, and huge wolf spiders would finish the brutal composition with no–nonsense webs." In another place, he writes of a horrible teacher before whom he feels himself "turning hazy, then opaque, an early–onset cataract." And on every page we sense the presence of the man behind the words, a man we could imagine traveling at some cost to visit, to stand and ooh and ah politely at his 900 cereal boxes, to exclaim, "I never knew there were so many kinds of tuna fish." But it would be the man and not his things, that we had come to see.

Finally, as King approaches his conclusion, he makes the reader understand that something hangs now in the balance, and it matters what the outcome is. The stakes are high. We have been treated to a fine and funny, charmingly written and deeply felt portrayal of the human heart. King's is a masterful collection of the different kinds of longing that we know, his world one full of albums waiting to be pasted into, containers wanting something to contain.

King shows us need that feels as though it might well have been crafted with fulfillment meant to follow, in some very satisfactory way. By the end of this little book we have reached a state of readiness to be told the answer. Tension mounts. It really does. King lets the reader be a player. He asks us what we think. It is a conversation, an important meeting, and we're sitting at a table in the emptiest of rooms, waiting to see what we will see when the door is opened.

Will the answer be as tall a giant as the question?

Can redemption sate the thirst that longing is?

Then the final chapter. My disappointment is immense. Oh no. Not that. Don't tell us that's the answer. It is as though we've traveled a thousand arduous miles only to find we have been walking, sometimes crawling, in a perfect circle. Don't tell us that what we need is finer stuff or finer people who will vow to tend the stuff which we've already got.

I read the chapter one more time. A good thing too. I realize finally that it is a wishful ending after all. We have been taken on the quest, the bumpy horseback ride with dubious companions in every sort of weather, so purposefully, that we can envision the Holy Grail in bold detail, we can all but smell the incense of sweet satisfaction when we find it, the end at long last found to be as perfect as our longing promised it would be.

And in the end we do come close, or closer anyway, to what will answer. We, like King, acquire. Acquire a thing or things, beautiful and costly, rich with meaning, things, and people too, and we lean hard into the ones who promise to collect with us, or sit beside us as we do. Forever. 'Til death do us part is what they say, but forever is what we hear.

Collections of nothing fool no one. They allow us to know need. All his life King has collected only those things which other people throw away. He, so close to the pure heart of the search, with no illusion that his things have value, makes us sense that looking is the worthy thing. Then, finally, value comes to him, as jewelry and reproductions, as offspring and lovers, often do.

And so the book ends with a question that it doesn't ask. These treasures, these exquisite old photographs, these diamond and ruby rings, our angel children and the grown–ups who swear they are determined they will always love us … are they it? Or could it be that they are hints and recollections sent to make us just a little bit suspicious sometimes late at night, causing us to wonder at certain strange, not unfamiliar hopes that come as we are falling off to sleep, all tired out from a love–blessed day, that make us wonder, are they it, or do they point the way.

Linda McCullough Moore lives and writes in Northampton, Massachusetts, where she writes short stories, soon to be collected.