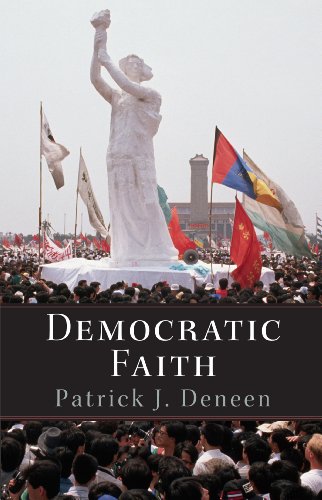 I for one had never imagined Richard Rorty and George W. Bush in the same political enclave, but there they are, chumming around in the concluding chapter of Patrick J. Deneen's Democratic Faith. It says a lot about the book that by the time this strange pairing appears it's as plausible as Fred and Ginger. The usual Left–Right categories, Deneen is telling us, are far from adequate for the current moment of the nation's history. For the sake of self–understanding, and possibly political survival, we need to move on—or, better, move deeper. And so on this journey we go down.

Getting to the bottom of anything invariably involves religion, Deneen knows, so when he looks at the political culture of our America, it's far from a neatly secularized world that he sees. Rather, he sees—or, better, feels—the abiding presence of Christendom, the moral and cosmological vision of which helped bring the modern democratic imagination into being, and with it a new religion of sorts, what Deneen refers to as "democratic faith"—a phrase with broad currency today but seldom, if ever, given the searching scrutiny it here receives.

"Democratic faith," for Deneen, is a peculiarly modern species of faith, growing steadily in strength only as more traditional forms of faith have weakened. Crucially, he sees its genealogical connection to these older faiths as having endowed it with a sacred aura, imbuing American political aspirations and ideals with a sense of legitimacy that transcends the terrestrial. And this is what makes this book "a study in paradox," for today's most outspoken and eloquent advocates of "democratic faith," especially within the academy, are almost uniformly suspicious of the presence of any self–consciously religious presence in the political sphere (as readers of periodicals like The New Republic are only too aware). Even as they construe religion as the enemy of democracy, those Deneen dubs the "democratic faithful" elevate democracy into a conception of life that has all the earmarks of a bona fide faith. Whether they be "deliberative liberals," whose confidence in rationality, science, and technique inspires their democratic quest, or "agonistic democrats," those animated by a foundational belief in the citizenship–forming capacity of conflict, these true believers insist on the possibility of profound social transformation with a hope that leans far more on faith than on empirical evidence.

Deneen's probing of the origins of this faith is brilliant—an exacting, at times exciting venture into pivotal texts. What he sees in the grand turn to modern democratic governance is not a clean slate so much as a palimpsest, his central metaphor for explaining this truly world–historical shift. "The older sacred writings were never wholly erased or covered over by modern secular signs but remained subtly beneath the surface, radiating divine legitimacy to secular efforts," he writes. "'Desacralization,'" it seems, "was never complete": the break from the Old Regime continued to be underwritten by earlier understandings of the universe and by the attitudes and practices that reflected them.

Deneen describes this dynamic as something of a perennial Western tendency, as new developments and departures gained approval through their linkage to earlier religious affirmations. As far back as ancient Greece, he shows, the great Sophist Protagoras made shrewd rhetorical use of the Prometheus myth to propose a level of human political capacity Socrates thought dubious. Whereas older versions of the myth had depicted Prometheus' storied gifts to humanity as an indivisible mixture of blessing and woe, on Protagoras' re–telling these same gifts simply empowered humans to new moral heights. Prometheus was no longer a complicated divine presence but rather a powerful heavenly friend. This far more pleasant story ensured purchase, and carried with it "the hidden resonances and lessons of the older stories," with their religiously freighted visions of divine–human encounter.

Protagoras wasn't the last Western thinker to make fruitful use of still–resonant vestiges of the divine. Deneen shows how Francis Bacon and Jean–Jacques Rousseu, for example, each made adjustments and appropriations to the Prometheus myth, as they sought both to understand mankind's enlarging powers and commend them to potential partisans. The mood of path–breakers such as these was hopeful, their faith expansive: ordinary people would be morally elevated through democratic government, as well as the other modern gifts—scientific, technological, psychological—that were accompanying it. The stage seemed to have been set by a master playwright for a true transcending of the ancient miseries and difficulties the race had always known.