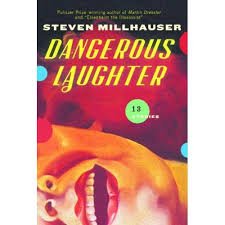 Steven Millhauser's tales chart a tight orbit around the kernel where art and the actual overlap.
August 2008

In fact, the plot of these dreams never varies. I walk—with an odd gait, like that of a nightgown–clad ballerina stage–snooping—through a house. I never cross paths with anyone, not a jointed doll or a nimbler Millhauser. But, without fail, I come across a cast–off library card–catalogue, its drawers filled with oddments: pince–nez, lumps of coal salvaged from melting snowmen's grins, bottle caps, photo corners. In the basement, I find a collection of comic books and Nabokov novels, ordered according to which color matters most to the story.

As do Steven Millhauser's stories. Including the stories that make up his most recent collection of fictions, Dangerous Laughter.

And no doubt that, in the course of its thirteen short stories, Dangerous Laughter will remind Millhauser's veteran readers of his other fictions. For instance, "Cat 'N' Mouse," the first story in this new volume (Millhauser styles it as the collection's "Opening Cartoon"), recalls the intermittent cartooning in Edwin Mullhouse. And Martin Dressler, were it a short story rather than a novel, would fit nicely with the four stories that Dangerous Laughter captions as "Impossible Architectures."  By the same token, Harlan Crane, Dangerous Laughter's "Precursor of the Cinema," could easily be kin to "Eisenheim the Illusionist."

But never mind the echoes we could map between Dangerous Laughter and Millhauser's earlier narratives. The stories collected in Dangerous Laughter manage—among themselves—congruities enough. And the most troubling and promising thing these stories share is that each of them, despite their varieties of form and narrative voice, inventories the fictional world with an exactitude that we rarely practice on the actual one.

Such honed attention has its effect. It makes the sunlight viscous, capable of "falling past [ … ] awnings onto heaps of apricots and figs." Millhauser's assiduity for description extends even to flies, with their "licorice–colored abdomen[s]," to a defunct doll with a head of "yellow yarn hair [that] looked as heavy as candy," and to a "pinecone as long as a cigar."

The prose in Dangerous Laughter does not, however, purple under the weight of Millhauser's lists and images. For his keen rendering of minutiae is not just—or even first—a show of virtuosity. Rather, in these stories, worries about paying either insufficient or undue attention to detail matter, and, in particular, such worries matter to theme and to plot before they shape style.

Take "The Disappearance of Elaine Coleman." Its narrator realizes that he has allowed a "dim girl in [his] English class" to "gro[w] up into a blurred and grainy stranger" instead of a vivid and inimitable adult. And he condemns himself for failing to notice her, for neglecting to catalogue the details that would have kept her from becoming nondescript. In sum, then, this story of a nondescript girl's disappearance—in which Millhauser's lavish prose fuels irony—tends toward fable, and the fable's moral is an injunction to pay attention.

Others stories in Dangerous Laughter, though, caution us against an opposite downfall: the failures not of negligence, but of fanaticism. And in these darker fables, the clotted detail of Millhauser's prose mimics his characters' excesses. The miniaturist employed "In the Reign of Harad IV," for example, fixes so relentlessly on detail—on fashioning tinier and tinier replicas of Harad's full–sized, lush kingdom—that he "s[inks] below the crust of the visible world" and beyond the grasp of human commonalties, thereby dooming himself to a life both "difficult and without forgiveness." At the center of "A Precursor of the Cinema," too, we find a man whose assiduity undoes him.

But the majority of these thirteen tales are more ambiguous than plain fable or cautionary tale. The finest stories in Millhauser's latest collection, in fact, neither simply chide us, inattentive denizens of an intricate world, for our laziness, nor bluntly trot out case studies on the danger of byzantine obsessions.

Instead, they urge us to question art and fiction, verisimilitude and simulacra. They urge us to ask whether what detailed artifice demands of us—assiduous notice, an aptitude for minutiae—seeps over into our lives in the real and multipart world, lending our senses keenness. Because the other possibility is that we barter away our capacity to relish ordinary life whenever we allow fictions rife with detail to distract us.

Of course, either answer to this question troubles us. We cannot consent to label art as either mere pretense or outright tutelage. Neither can we say whether we thrill or cringe, on reading a story like "The Dome." For the dome, a continental bell jar that puts the United States on display, simultaneously beautifies and belittles all that it contains. In other words, anything under the dome—like anything in a frame or on film or after a title page—becomes at once more picturesque and less significant than "real life." So when Millhauser writes that "the Mississippi is nothing but a trickle of water in a child's terrarium," the image charms us, but the sensibility that makes that image thinkable also makes possible what follows it: the callous definition of death as "little more than a brilliantly contrived effect."

The best plots in Dangerous Laughter, then, orbit indispensable questions. And if these stories leave the questions that they tinker with unanswered—and even, in large part, unasked—nonetheless we know what inquiries matter most to them. We know because Millhauser's tales chart such a tight orbit around the kernel where art and the actual overlap.

"The Other Town," for instance, spurs us to ask how far art's detailed semblance of human being can go before it begins to trespass on the actual stuff of human grit and the human heart. Likewise, when the naïve narrator of "Here at the Historical Society" smugly announces that the society's "meticulous and passionate researches multiply the details of the world and increase its being," we hear an inverted repetition of the physicists' old question—at what point does observation skew truth? Although for the fabulist, maybe we should phrase the question differently. Maybe we should ask at what point craft disfigures verity.

And somewhere at the back of these tales that interrogate themselves, in a room furnished with an old library card catalogue, its drawers filled with pince–nez and bottle stops, I imagine Steven Millhauser, their author, querying himself. In particular, I imagine him second–guessing his weakness for simile, for fictions swarmed by detail. I imagine him asking whether a weakness for the "licorice–colored abdomen[s]" of flies and "yellow yarn [ … ] as heavy as candy" is really is a weakness—a retreat from the palpable world—or whether it might be a rehearsal for that world, a practiced fondness for whatever might turn up.

For my part, I believe the latter.

Jane Zwart is assistant professor of English at Calvin College. She has poems recently published or forthcoming in Rattle, Boston Review, and Free Lunch.