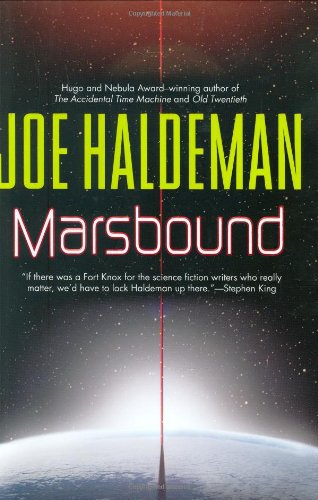 One More Trip to the Red Planet

Mars in the science-fiction imagination.

Give Joe Haldeman credit for this much: He's willing to swing back for a look at those old conventions. Not the canals or the princesses; there's a limit to how much old-fashionedness a story can stand these days. But in his latest science-fiction adventure, Marsbound, Haldeman gives us a straightforward, coming-of-age Martian story, right out of the good, old Robert Heinlein playbook.

Haldeman is that uncomfortable kind of author who never quite managed to cross over from success to actual influence. Born in 1943, he achieved considerable acclaim for the 1975 story The Forever War, his answer to Heinlein's pro-military Starship Troopers. Too much acclaim, perhaps. The book was read, at the time, as a profound commentary on the Vietnam War, though it wasn't particularly deep, and the praise may have inspired him to such over-inflated balloons as The Hemingway Hoax in 1990 and Forever Free in 1999. In more recent years, he's returned to Heinlein's form of young-adult novels with The Accidental Time Machine last year and Marsbound this year.

If The Accidental Time Machine was a recasting of Heinlein's 1957 time-travel story The Door into Summer, then Marsbound is a recasting of Heinlein's even-earlier Red Planet. Sure, the protagonist is a girl instead of a boy, but the book is structured around the same problem of growing up—together with the same problem of a young person forced early into heavy responsibility, and the same problem of an angry administrator who hates the protagonist for some hidden reason. Marsbound borrows from the later, sex-crazed Heinlein novels for a few of its more cringe-making scenes—does the 65-year-old Haldeman really think his lubricious musings explain the sex drives of 18-year-old girls?—but overall the book works well enough.

As the story opens, Carmen Dula and her family have been chosen by lottery for a six-year trip to Mars. On the beach, waiting for the Space Elevator that will left them up to their space ship, she meets a man, fifteen years older, named Paul Collins—who turns out to be the pilot who will fly them to Mars. Two weeks in the crowded confines of the Space Elevator gives her no chance to get to know Paul better, but during the six-month flight on to Mars, she manages to find enough privacy to form a relationship with him.

Ah, but things don't go so well after Carmen arrives on Mars itself. The daily routine is dull, and the chief administrator on Mars, a woman named Dargo Solingen, takes an instant dislike to the girl. Stalking out in frustration, Carmen puts on her suit and goes for a walk on the planet's dry and dusty surface—where she promptly falls down a hole and is rescued by Red, the leader of another colony on Mars. A colony, as it happens, of aliens who came to Mars thousands of years before. Before long, Carmen is a key figure in an interplanetary struggle, the only liaison between the strangely powerful aliens and the human race they might destroy.

Whew. Is it giving away too much of the story to say that she succeeds in her mission, and that she gets Paul, and that the most saintly of the aliens gives up his life to save Carmen and the rest of humankind? The reader will have guessed as much in the opening pages, for Marsbound is a book that declares from the beginning that it's going to follow the old conventions.

Not enough of those conventions, alas. I want back my canals and my princesses and my golden eyes. I want back a reason for the Red Planet to remain central to the science-fiction canon. I don't exactly want to go Mars, but I want once again to imagine going there.