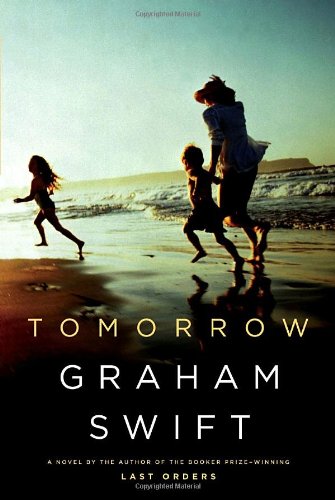 Lying to Protect Someone

A mother's long&ndash;deferred revelation to her children lies at the heart of Graham Swift's new novel.

Ever since Graham Swift's second novel, Shuttlecock (1981), he's let his characters speak in their own voices, chockfull of all their quirks. Tomorrow is the first time he's let a sole female do all the talking. The entire novel covers only several hours of a June 1995 morning—from 1:00 a.m. (really the tomorrow of the title) until dawn. Paula Hook, a successful art dealer, lies in bed next to her slumbering husband Mike, a thriving publisher. Her narrative—part history, part confession, part plea—is addressed to her sixteen–year–old twins, Nick and Kate, sleeping down the hall. In the morning, it has been decided, the twins will hear a secret that their parents have been harboring for sixteen years.

Mike will do the talking. He knows, he accepts that it's up to him. On a Saturday, knowing you both, the morning will be half gone before you even appear for breakfast, and you'll need your breakfast. Then Mike will say that we need to talk to you. He'll say it in an odd, uncasual way, and you'll think twice about answering back.

No, the parents aren't splitting. No, they're not getting a divorce. No one has been diagnosed with cancer. The kids are not getting shipped off to relatives. What then could it be?

Oh, Paula gets close to telling, many times, but just when you think you're going to find out what news could be so horrible, she gets nervous and veers directions, plunging into periods of personal history she deems important for the twins to know—how she and Mike met at Sussex University, how they owned a cat named Otis, and how, on one beach afternoon, Mike saved the twins from drowning.

What can I do but tell you how it was? What can I do but give you your mother's version of that time before you were born? You're sixteen and the night's not young, but here's a bedtime story.

I'm your mother, and now the truth is going to be uncovered, there should be no little residues of secrecy.

When the secret is revealed, it is something that might be considered banal, if—and that's a big if—the children had known about it from day one. Some reviewers have torn Swift apart for this—the ho–humness of the revelation. I beg to differ. For example, let's suppose that you grow up believing your parents love you. Then later in life, it dawns on you they didn't love you. They loved the fact that you were a good student or a boon to their conversations. Basically, they loved how good you made them look. They loved your persona. So, here you are, in your sweet adult life, and suddenly, you understand that who your parents love is not you. That's a pretty weighty realization, in my opinion—something that can take years of therapy to resolve. Or maybe that's just me.

In Tomorrow, the issue at stake is not what the secret is. It's about being deceived, being lied to—I would go so far as to say, being betrayed. It's about thinking of all the times in the past that required a camouflage effort—to cover up, to hide the facts. What else are they hiding?

Because Paula skirts around her secret for so long, she cannot delve into the full–fledged reactions she expects from her children, and this is the missing link, I think. I hesitate to say this because I do not know Swift's intent. He may have done this intentionally, wanting to leave a substantial gap for thought and discussion. If we were Nick and Kate, what would we do after hearing this shocking news? It is left up to our imagination, because the Nick and Kate of the book are still sleeping when Paula's monologue draws to a close. We have no idea how they will react.

The prose is gorgeous, something we've come to expect of Swift; however, if you grow impatient with long, wrap–around soliloquies that circle and circle again, this might not be the book for you. I happen to like the lengthy psychological dissections of characters.

Elissa Elliott is a writer living in Rochester, Minnesota. She's at work on a novel about Eve.