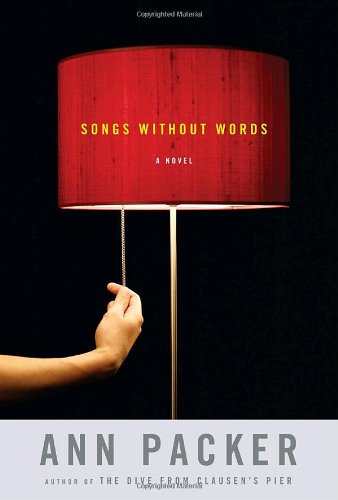 What Are Friends For?

A strong second novel from the author of The Dive from Clausen's Pier.

Ann Packer's debut novel, The Dive From Clausen's Pier, became a book club favorite because it broached a difficult dilemma. What would you do if you were about to get married, feeling a little tentative about going through with it—and your fiancé foolishly dives into water that's too shallow, paralyzing him for life? Would you stay, or would you go?

With the same introspective tension, Packer's second novel Songs Without Words dishes up an entirely different quandary. Are friendships formed—and held—like family roles, to satisfy the various hungers we have? Think about it. Your family reunion approaches (indeed, mine is just around the corner!). You dread it because, for some strange reason, the moment you arrive on the scene, the who you've become mysteriously vanishes, and in its place stands the who I was. In the blink of an eye, you've reverted back to the familiar role you played as a child—caretaker, rebel, comic, scapegoat, whatever—and suddenly all the tender, raw emotions are there. Your stomach seizes up like a fist, and you feel like a piece of flotsam upon the shore.

Now go further. Imagine your best friend, or any friend. Ask yourself: are you doing the same familial jig with him or her? This is the question Packer asks.

Liz and Sarabeth have been friends since childhood. When Sarabeth was sixteen, her mother committed suicide, and she moved in with Liz's family, right across the street. Cut to years later: They're both adults, thick in their own lives—Liz as a stay–at–home mother, Sarabeth as an unreliable "home stager" (someone who clears a home's clutter and rearranges its furniture to sell it)—but still, they are as close as ever.

Until a near–disaster with Lauren, Liz's teenaged daughter.

Sarabeth is unable to cope with the news, and instead of rushing to Liz's aid, she folds in on herself, emotionally and physically. She doesn't feel up to the task, to help Liz. It is enough that she keeps herself functioning.

This is what the book turns on—how so much depends on that moment when you should do something, but you fail to do it. When Sarabeth reappears after weeks of despondence, Liz bristles and blurts out, "I'm not your mother," meaning both "I can't take care of you" and "I'm not going to hurt you." This startling statement stuns them both—with its astonishing clarity and truth—and sends them reeling from each other, to make sense of this sad and faraway song, a song without words, but a song nonetheless.

I have to admit, I lingered in a charcoal gloom while reading this book. But this does not mean I didn't like it. It simply means that Packer did a stellar job of portraying depression and how it affects surrounding family members.

I think what Packer has done, in both of her novels, is peer into the psychology of ordinary lives and ask extraordinarily tough questions. In an interview on The Narrative Thread, Packer answers the question of why she thought her first book did so well, and I think it will apply to her second, as well.

I have a theory. Which is that the main theme of the book hits a nerve with people. By "main theme" I mean, the conflict between our desire to be loyal to the people we love and to take care of the people we love and our need to be true to ourselves. And to pay attention to how we are feeling about things. Again, it hit a nerve because that kind of conflict, while given a treatment on a grand scale in the book, is also something comes up in daily life all the time, for everyone. So, we live life negotiating between loyalty to others and taking care of one's self.

I want to say one more thing about the difficulty of writing the psychology of characters. An author has choices to make: do I do a bit of exhaustive research on depression, or do I happily observe and steal my friends' neuroses, or do I splay out my own feelings on the page? They're all valid options, but the one that rings most true is the last. I don't mean to imply that Packer is a depressed person. Far from it. What I am saying is that she is able to mimic and explore and flesh out depression believably. I know how hard this is to do, and I applaud her for doing it.

Not every novel has a take–home message, but for me, this one was a gentle reminder that friendship is about giving and taking.

Elissa Elliott is a writer living in Rochester, Minnesota. She's at work on a novel about Eve.