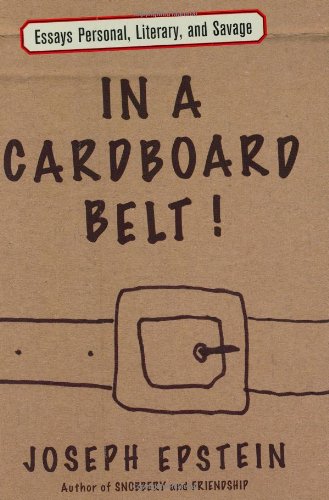 Joseph Epstein is back with another collection of superb essays.

Few are the writers who weigh in so often about weighty subjects without putting their weight down. Epstein professes no known creed. He isn't simply a stylist with irony but a man of irony itself. In his thrashing away at Adler, for whom he worked on the staff of Encyclopedia Britannica, Epstein reveals his penchant for a lack of finding bedrock philosophical truths as he observes the impact of Adler's teachings about Plato on Adler's seminar pupils: "After years of reading Plato, they seem no closer to escaping the cave than the rest of us." In the opening essay of this new collection, on turning seventy, he says that "I find myself more impressed by the mysteries of life and more certain that most of the interesting questions it poses have no persuasive answers, or at least none likely to arrive before I depart the planet." He continues, "I suffer, then, some of the fear of religion without any of the enjoyment of the hope it brings." When his father died, Epstein found that he had left behind some 2,700 pages written in his own style of wisdom. "Although he had no more luck in this than the rest of us, there was something gallant about the attempt" of a senior citizen not finding a publisher but grinding away anyway (italics mine).

In his essay on why he is not a lawyer, Epstein closes with this: "It's a much easier job to be an investigator or critic of morality, which is what a writer does, than a lawyer, someone called upon to practice morality, relentlessly and at the highest level, day after day after day." Faced with the task of cleaning out his apartment and disposing of most of the thousands of books he had collected over a lifetime, he discusses the few authors and books he chose to hold onto. "I kept a few Schopenhauer items, including The World as Will and Representation; his unrelenting darkness for some reasons charms me." And Epstein notes that "I have three different Bibles in the apartment—a work, the Bible, I've not yet read all the way through and tell myself I must before I am hit with a most unpleasant quiz administered at certain pearly gates."

What Epstein says of John Keats can be said of Epstein's aesthetic urge: "It's a virus, allow me to add, for which medicine has not discovered a cure." And it's contagious to boot.

Scot McKnight is Karl A. Olsson Professor of Religious Studies at North Park University, author most recently of A Community called Atonement (Abingdon), and a wannabe essayist.