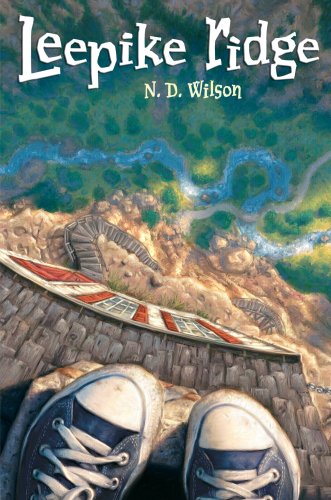 An adventurous tale for readers young and old.
May 2007

N. D. Wilson's young adult novel Leepike Ridge is an interesting mix of several genres, well blended to form an enjoyable and captivating tale. Considering only the main characters and what might be called the "story"—that is, the mere sequence of events—Leepike Ridge is perhaps best described as a classic boyhood adventure novel. But it has a strong undercurrent of otherworldly fairy tale and fantasy in the style of English writer Alan Garner (The Weirdstone of Brisingamen, The Moon of Gomrath), with just a touch of Roald Dahl–ish surrealism, all while exploring the sort of real–world relationships and decisions that many young adults approaching their teen years have to face in one way or another—and that many writers of young adult fiction explore in far less adventurous stories.

It is the fairy tale flavor with which the story begins, "once upon a time in a land most definitely far, far away."  But the far away is not so far away as to be unreal, or disconnected from our world. It is a place, the narrator tells us, where real people have lived: a landscape that might even be recognizable to some readers. Thus Wilson illustrates the principle that stories—even fictional ones, and perhaps especially fantastic ones—must be presented as real, and must be believable (while they are being read).

Indeed, when in the opening scene a delivery truck arrives with a new refrigerator for the widow Elizabeth Hammond, and the drivers grumble about the long steps up to the house, we feel very much in our own world. Except that the Hammond house is set on top of a large boulder. In fact, it is anchored to top of the boulder by chains, which is why it attracts so much lightning (and tends to be a hard place on electrical appliances).  The house itself, the mystery that lies beneath it, and some of the characters seeking to explore or profit from that mystery, bring us back to the otherworldly aspects hinted at in the opening. If not actually in the realm of Faery, we are somewhere near its borders.

But then we meet a very real and compelling 11–year–old hero, Thomas Hammond, or Tom as he is called, who since the death of his father three years earlier has grown more mature than his peers; who therefore feels insulted that his mother thinks he would still enjoy playing in an empty refrigerator box; and who definitely does not like that Jeffrey fellow courting his mother. Intent on being angry that his mother continues to see Jeffrey despite his protestations, Tom climbs out his window during the night and walks down to the stream to find the large piece of foam from the refrigerator box. There curiosity exceeds anger. Toms tests the foam and discovers it holds his weight in the water. Soon he is floating down the stream, falling asleep to the sounds and fragrances of the summer night air.

And thus the adventure begins. When Tom awakes, he and his foam boat are being sucked underground as the river takes a subterranean turn. There he discovers a series of caverns in which lie not only a long–sought ancient treasure but also the answers to many mysteries, some of which—like the cause of his father's death—he had never thought to explore. Most important of his discoveries are a three–legged dog, Argus, and an old family friend, Reg, who knows the answers to these mysteries but has been trapped underground, living on crayfish and whatever else floats by, for the same length of time that Tom's father has been dead.

Wilson's story would be remiss if it did not also take us above ground from time to time, back to the Hammond home, where Elizabeth conducts a frantic search for her missing son, presumed dead by almost everybody but herself. On top of coping with Tom's disappearance, she is beset by a pair of unwelcome suitors and their shifty friends (very much like Penelope in Homer's Odyssey, except that it is Elizabeth's son and not husband who is missing).  Elizabeth's search for her son eventually entangles her in the same mystery with the same set of villains that Tom and Reg are wrapped up in below ground, and the dangers she faces above are nearly as great as those Tom faces as he tries first to survive his imprisonment and then to escape it.

Ultimately, Tom, Reg, and Elizabeth all discover something about themselves, about each other, about whom they can (and cannot) trust, and about what each is capable of doing with a mix of faith and persistence. The suspense is well done, sufficient to keep a reader's interest—I was captivated enough to read the book through the first time in one sitting—but Wilson is equally successful at giving us cast of main characters we really care about, who are invested or become invested in events and decisions which are important. And that makes Leepike Ridge a good novel—and not merely good "young adult" fiction.

Matthew Dickerson is co–author, with David O'Hara, of From Homer to Harry Potter: A Handbook on Myth and Fantasy (Brazos Press).