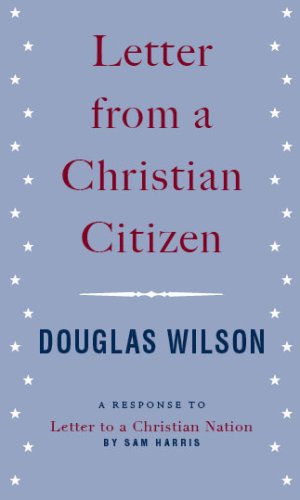 Letter from a Christian Citizen - A Response to "Letter to a Christian Nation" by Sam Harris
Douglas Wilson
American Vision, 2007
111 pp., 25.84

Can You Reason with Christians?

A response to Sam Harris' Letter to a Christian Nation.
May 2007

By now you're bound to have heard of Sam Harris' bestseller, Letter to a Christian Nation, itself a spinoff from the book that put him on the map, The End of Faith: Religion, Terror, and the Future of Reason. (I love it when someone with his hair on fire runs around warning us that THE FUTURE OF REASON ITSELF IS IMPERILED!!! That's pretty high on my list of worries, too.) Now along comes Douglas Wilson with a rebuttal, formatted in the same style as Harris' little book.

Wilson is probably best known as one of leading figures of the classical Christian schooling movement. The community centered on Christ Church in Moscow, Idaho, which Wilson pastors, has a publishing outlet, Canon Press, and issues a magazine, Credenda/Agenda. It's an extraordinarily vital enterprise, Reformed in conviction and represented by figures as various as the prolific biblical theologian Peter Leithart; Doug Jones, whose devastating parody The Mantra of Jabez was one of my favorite books of the year a while back; and N. D. Wilson, son of Douglas, whose novel (for young readers) Leepike Ridge will be published later this month by Random House.

All of these writers, diverse as they are, write with a certain attitude. They are superbly educated but uncowed by the huffing and puffing of secular authority. And while they are grounded in biblical faith, they eschew unctuous Christian–speak. They are smart, they are funny, and they aren't afraid to use words such as "sin" and "judgment." The very existence of this community, in short, contradicts Sam Harris' condescending portrait of religious believers.

If Harris is right, there can't be any genuine engagement between reasonable people (people like Sam Harris) and Christians or other religious believers. As Douglas Wilson observes, "It is one thing to say that we ought to move away from politically–correct euphemisms (which I agree with), and then to go on to say that everyone in the history of the world outside your little atheistic society is a raving psychopathic wackjob. 'Let the dialogue begin!' Coming from you, it sounds a bit hollow."

But Wilson calmly responds to Harris' arguments with arguments of his own. Set aside for a moment the question of whose arguments are better (not to mention wittier). The exchange itself shows that Harris has misframed a debate with a very long history.

Here's a suggestion. If you haven't read Harris' Letter yet, do so; you can read it easily in an evening. Follow up with Wilson's Letter the next night. And if you want a sense of how Wilson's mind works, check out his liveblog debate with the atheist Christopher Hitchens on the Christianity Today website.