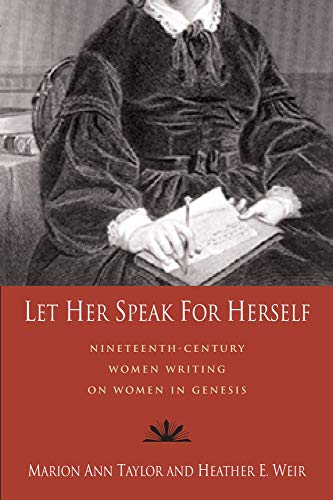 Let Her Speak for Herself: Nineteenth-Century Women Writing on Women in Genesis

Who are your favorite women biblical commentators? Given that women have probably comprised more than half of all Christians throughout the history of the church it would seem strange if you were not able to name any. If you did recall one or more, then, admit it: you thought of writers who are still alive, or at least who did their work since 1950. Did women really have nothing to say about Scripture for 1900 years of Christian history? Or have we just failed to remember?

In a groundbreaking contribution to the history of biblical interpretation, Marion Taylor and Heather Weir have tracked down more than a thousand books on the Bible from the minds of 19th–century women. Having concentrated on one century, they then focused on the female characters in the first book of the Bible. Although it contains much useful information and analysis provided by the editors, at its heart, Let Her Speak for Herself: Nineteenth–Century Women Writing on Women in Genesis is an anthology of excerpts from the works of fifty Victorian women.

These commentators represent much variety. They are from different nations. A handful of Jewish authors keep the collection from reflecting merely an in–house, Christian conversation. Still, that family discussion would have been lively enough.

There are theologically liberal voices. Julia Wedgwood, a cousin of Charles Darwin, wrote as a champion of the latest fashions in German biblical criticism. Her comments begin unflinchingly, "The work of the Hebrew Creator appears as a series of blunders." Likewise there is a range of selections—including Clara Bewick Colby on Sarah—from a landmark volume in the history of American feminism, The Women's Bible. The editors mischievously suggest that Wedgwood and Colby were "Wellhausen's helpmates." On the other hand, Harriet Beecher Stowe, famous for Uncle Tom's Cabin, also wrote a book combating liberal biblical criticism.

Meanwhile, traditionalist Victorian women say things about gender roles that many a male, conservative evangelical pastor today would be ashamed to utter. Sarah's life prompted Etty Woosnam to remark: "God does not in His holy Word anywhere encourage women to seek distinction or eminence for themselves, but shows how good women make it easier for men to rise." Ouch.

On the whole, however, these commentators, whether evangelical or liberal, explore the lives of biblical women in a more sympathetic way than male commentators typically have done. Again and again, it strikes them that Eve is less culpable than Adam. Hannah Mather Crocker, a granddaughter of the leading Puritan divine, Cotton Mather, averred: "It does not appear, from his own account, that Adam withstood the temptation with more fortitude than Eve did; for she presented the fruit, and he received it without hesitation; but it is plain she did not yield immediately, though the most subtle agent of the devil told her that her eyes should be opened."

It is arresting how often women commentators identified with Hagar. Many read her story with an awareness of contemporary slavery in America. Therefore, it is not surprising that the African American poet Eloise Alberta Bibb wrote poignantly about "The Expulsion of Hagar." Less predictably, even Jewish authors tended to identify with Hagar more than Sarah, gravitating to her as a type of the experiences of contemporary Jews as exiles and wanderers.

For this reader, the most powerful and engaging selection is the account of Hagar by the evangelical social reformer, Josephine Butler. Butler dedicated her life to helping so–called "fallen" women. She saw Hagar as one of myriads of women with whom some man had sex only to cast her away. Butler criticized male biblical scholars: "I am perplexed, in reading certain commentators, in noting a degree of—shall I call it complacency?—in their judgment of this story of Hagar." She would not pull the punch: "I prefer to express frankly my disgust."

Butler declared her intention to offer "a motherly, a womanly reading" of this biblical narrative. Exemplary evangelical though she was, she insisted that God's perspective on this passage was not limited to apostolic allegorizing: "St. Paul was not a father, nor was the human heart of the man stirring in him at the moment when he wrote to the Galatians in the direction of pity for the outcast woman."

She then proceeds to an illuminating close reading. For example, Genesis 21:11–12 says: "And the thing was very grievous in Abraham's sight because of his son. And God said unto Abraham, Let it not be grievous in thy sight because of the lad, and because of thy bondwoman." Butler comments that Abraham is concerned about only his child, not Hagar: "But God, more just, more tender, more 'mindful of his own' than the best and holiest of men can be, supplies the omission."

Repeatedly, commentators observe that Hagar has the honor of being the first woman directly addressed by God. Sarah Elizabeth Turnock drove the point home, her own namesake connection with Sarah notwithstanding: "It was not with Sarah the princess, or any other woman, but with Hagar, the poor slave, the typical outcast."

Polygamy is a persistent concern. This aspect of the narratives is not just a little puzzle of progressive revelation and morality—as it is so often for male writers—but rather an engulfing reality of suffering. In a passage undoubtedly informed by the plight of women she knew, Mary Witter considered the risk Rebekah was running in marrying: "A woman depends vastly more for happiness on her husband than does a man on his wife. Indeed it may be said that she is happy or miserable as is his will. Not so with a man. Many sources of enjoyment are open to him, even though his home be not a happy one."

Leigh Norval, on the other hand, noticed a discontinuity with her world: "Rachel proved so agreeable that the seven years 'seemed unto Jacob but a few days for the love he had to her.' Somehow girls do not make themselves quite that charming now." Moreover, as she well knew, time does not fly for a woman living in a patriarchal society: "Seven years is a long time in a maiden's life. To Jacob they did not seem long. His work in the fields kept his hands and mind busy during the day, and he could see his Rachel morning and evening. But it is harder for the girl to sit and wait at home while her lover is working for her sake."

Grace Aguilar argued that Jacob's years of service revealed that Rachel had more going for her than a pretty face: "Beauty may attract and win if the time of courtship be too brief to require no other charm, but it is not sufficient of itself to retain affection." Moreover, women commentators had the imagination to sympathize with men as well. Stowe commented dryly on Jacob's honeymoon: "Not the last man was he who awakened, after the bridal, to find his wife was not the woman he had taken her to be."

Much in this anthology reflects the writers' location in the 19th century. Many of these authors linger on the lost Eden in a way that betrays a very Victorian obsession with gardens. Besides the "flowerly lawns, verdant walks, and embowering shades of Eden", we have also lost the Victorian level of biblical literacy. Perhaps what is most amazing about Witter's work is that, back then, one could publish a book for juvenile readers on The Edomites: Their History as Gathered from the Holy Scriptures.

As to other Victorian conventions, the editors comment wryly on one author: "Little is known about Mrs. Donaldson; her name, like that of Lot's wife, has been lost to history." More substantively, these women tended to evade the sexually explicit accounts. An exception is the anonymous author of Women Like Ourselves who uses the story of Shechem raping Dinah to instruct girls: "If then you have already had the good fortune to gain some man's love, do not trust too implicitly in his honour."

Although a review such as this inevitably will focus on surprising comments or those that seem to reflect a gendered reading, much of these writings are simply straightforward presentations of biblical teaching, often with effective devotional applications. Still, in their own way, no matter how theologically conservative they were, many of these women sought to correct traditional interpretations that apparently reflected a male bias. They emphasized that Adam found a suitable mate in Eve because she was his equal—a rational, articulate being. Lillie Blake did not think Eve's partner acquitted himself well: "The subsequent conduct of Adam was to the last dastardly…. he whines trying to shield himself at his wife's expense! Again we are amazed that upon such a story men have built up a theory of their superiority!" Many commentators argued that the gospel overturned the curse of male domination.

Several commentators found that the women of Genesis made space for themselves even in a patriarchal culture. Stowe claimed that Sarah was happy to call Abraham "lord" because she knew the real nature of their relationship: "Over the heart of such a man, a beautiful, queenly woman held despotic sway."

Taylor and Weir have proven beyond all doubt that the voices of past women commentators are both recoverable and insightful. This short review has been able to quote from only a portion of the women presented in this volume. And what shall I more say? For the time would fail me to tell of Susan Warner, who was an instructor in Bible at West Point; or Mary Cornwallis, who wrote a four–volume commentary on the entire Bible; or Elizabeth Julia Hasell, who taught herself Latin, Greek, Italian, German, Spanish, and Portuguese; or numerous other women biblical commentators.