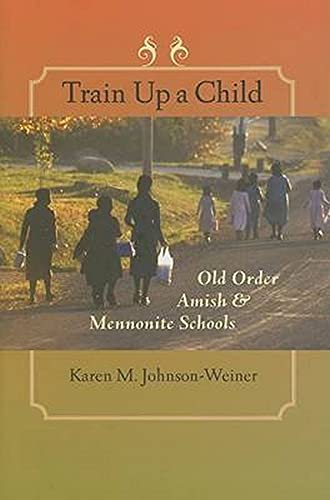 How the Amish Do It

A study of Old Order Amish and Mennonite schools should provoke us to rethink Christian schooling more generally.

One of the most intriguing publishing trends of the last decade or so is the fascination with the Amish, most vividly expressed in a thriving subgenre of fiction devoted to Amish life (largely though not exclusively pitched to the evangelical Christian market) but also in journalistic accounts. Alongside this popular line is a parallel trend in the scholarly world, where (especially under the imprimatur of John Hopkins University Press) impressive work is being done.

Karen M. Johnson–Weiner's Train Up a Child falls in this latter category. Johnson–Weiner's book can be read on two levels: as an ethnographic study of Old Order Amish and Mennonite schools, and as a stimulus to rethinking parochial schooling across the religious spectrum.

Train Up a Child presents detailed descriptions of schools in nine Old Order communities scattered through New York, Pennsylvania, Michigan, Indiana, and Ohio. Old Order religious ideology defines the church–community as "God's realm" and demands its separation from the world. The schools covered here represent the wide range in degrees of allowable worldliness within the Old Order. They also vary in size, age, economic base, and the nature of their interaction with other Old Order communities.

Johnson–Weiner analyzes each local community in terms of its relationship to other Old Order settlements and to the general culture. Then, she explores the influence of such relationships on pedagogy, student–teacher interaction, discipline, selection of classroom materials, the physical structure and location of the school in the community, the extent to which students are drawn from one church community or several, the teaching of religion, and parental participation.

Train Up a Child is the most comprehensive survey of Old Order Schools currently available. Johnson–Weiner's personal contacts within the Old Order community enabled participant observation, interviews, and correspondence that would be impossible for the average researcher. Combining this unique access with her research skills as chair of the Department of Anthropology at SUNY, Potsdam, she presents a readable, credible analysis of Old Order education's response to modernity.

Despite the popular fascination with the Amish, "the average North American," as Johnson–Weiner notes, "sees little difference between one Old Order Amish person and another … . In their plain, archaic–looking clothes and horse–drawn buggies, they all seem firmly anchored in the nineteenth century." Guilty as charged. Most of us don't know the Swartzentruber Amish from the Wenger Mennonites. Hence at the strictly ethnographic level, Train Up a Child struck me like a National Geographic special—interesting but remote, without impact on my everyday life.

But I also read the book as a parent and as a member of another Christian community, not so readily recognizable and distinctive as the Amish but nonetheless sharing many of the challenges they face. If the Amish are going to survive as a religious and cultural entity in the new millennium, they need to ensure that their children accept a set of values that are clearly different from those of the dominant society. That sounds like me and mine. Clearly personally relevant.

The issues the Amish community leaders considered when creating their schools are profitable for the rest of us to consider as well. Teachers at Swartzentruber Amish schools do not explicitly teach religion or Christian values. On the surface, that seems an odd choice for a parochial school. But Swartzentruber leaders want to be sure their community clearly understands that the responsibility for communicating spiritual truth and fostering spiritual growth belongs to parents, assisted by the church. School will deal with education. Parents must provide religious oversight. Don't expect a Christian school to meet your responsibility.

In some Old Order schools, teachers are the clear authority inside the classroom but immediately lose that position when they step outside. They play on the playground as part of the children's group rather than as supervisors. They may be "Teacher" in the classroom but they are always greeted by just their first name in the community. The point here is that education is only one part of life. It isn't the main drag. The community and its shared values are far higher in priority. In my upper–middle–class suburb maybe we need to rethink this. (How does our tendency to extravagantly honor admission into Ivy League schools square with valuing each child as God's unique, loved creation? Which parent at my church could calmly report "my son is failing fifth grade, but becoming a kinder person"?)