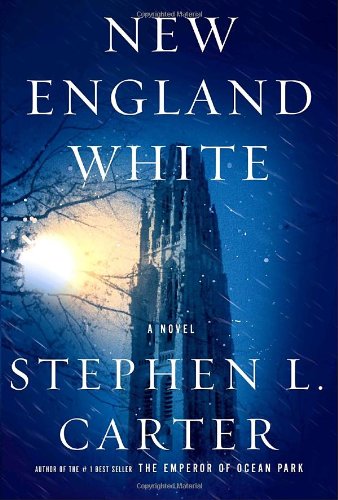 Secrets of the Talented Tenth Revealed

Possibly inspired in part by the old Broadway adage that if they liked it once, they'll love it twice, New England White bears a great deal of resemblance to Stephen Carter's first novel, The Emperor of Ocean Park (2002). Both feature as protagonists highly professional, upper–middle–class blacks in high places in the white world; both are built around murder mysteries revealing corruption among the rich and requiring the decoding of elaborately intricate clues and messages for their solution; and both are too long by a good deal, a common sin in book–writing generally these days (publishing seems to be the industry where editors go to die, not to work).

Carter, a law professor at Yale, has never been afraid of taking on large themes, as his books Integrity (1996) and Civility (1998) attest. In that sense, his turning to fiction—announced with great fanfare and very much anticipated by the reading public—was not really surprising, and can best be seen as an extension of his role as a public intellectual. He first came to prominence in 1991 as a skeptic of affirmative action and a chronicler of the black élite with his autobiographical Reflections of an Affirmative Action Baby. The book appeared at a time when some noted black thinkers were expressing reservations about the stigma of affirmative action, about the civil rights movement and integration, and about the post–King world of black politics, most notoriously exemplified by the case of Clarence Thomas. Carter was by no means a product of the right nor an apologist for it but rather something of a black centrist, as his later books showed, particularly his most popular, The Culture of Disbelief: How American Law and Politics Trivialize Religious Devotion (1993), a book President Clinton publicly praised.

On the one hand, Carter supports prayer in public school and feels that religion has been an important force for social change (abolition, the civil rights movement, temperance). On the other hand, he strongly endorses dissent as essential for a democratic society and something our courts should encourage instead of stifle—and he further acknowledges that a good deal of our dissent has its origins in religious faith. (That religious orthodoxy of any stripe feels it must by necessity be against the very liberalism that Carter supports; that state–sanctioned temperance in the form of Prohibition turned out to be a hideously inept attempt at social reform, as were welfare programs for the poor: these are other matters. Right–wing religious orthodoxy has become the world's most remarkable expression of dissent today.) In short, it is probably the case that everything which one can believe is good about religion is also what one can reasonably think is bad about faith and the faithful. And if this is true, religion must be the greatest expression of irony in human life, as Carter himself recognizes in some measure with his account of the fictional Kepler Divinity School in New England White.

Some have called Carter the Theodore Dreiser of the black American educated class—which, considering Dreiser's uneven reputation, may be something of a left–handed compliment or even a downright insult. Besides, while Dreiser wrote about murder, he never wrote murder mysteries. Still, Carter resembles Dreiser in his ability to capture the material world of a certain stratum of American society: not just the possessions and lifeways of upper–middle–class and professional blacks, their clothes, their vacations, their cars, their houses, but the stuff that structures their understanding of reality, the stuff that reveals the fragility of their egos, the status creep of their possessions as the source of their identity. (Perhaps this is the actual message of declension in the novel: things, instead of ideas, have become the essential underpinnings of the African American identity, although as the authorial voice of New England White, Carter seems enamored of things himself, as most novelists are.) No one since E. Franklin Frazier has looked at the black professional in such a penetrating light. (And unlike Frazier, Carter displays much affection and understanding in his portraits.)

Moreover, Carter has some capital as a novelist, comparable to that enjoyed by Chaim Potok when he set out to write about Hasidic Jews in Brooklyn: Carter's chosen people are quite exotic to most American readers. But Carter does not capture—as well as Dreiser did for his slice of life in novels such as Sister Carrie and An American Tragedy—the desire of this class to want what it wants, its ferocious hunger for respectability and control. In his portrait of master manipulator Lemaster Carlyle, the black president of a university that sounds very much like Yale, Carter at least touches on this hunger. What he cannot do with full literary conviction is dramatize the compulsion of the black parvenu. He can describe black gatecrashers' trappings and their attitudes with deadly, sometimes, hilarious, accuracy, but he has yet to dramatize the emotional interior of this group successfully. And beneath the bestseller veneer, overwrought and over–plotted (sometimes New England White brings to mind a sort of high–falutin' Peyton Place with its revelations of corruption in old families), dramatizing is one of the things that Carter, like any ambitious novelist, wants in principle to achieve.