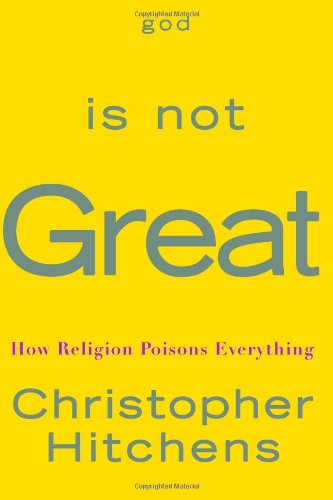 God Is Not Great: How Religion Poisons Everything
Christopher Hitchens
Twelve Books, 2007
307 pp., 29.99

Christopher Hitchens Explains It All for You

Move over, Sam Harris; another atheist wants the pulpit.
April 2007

A look through the newspapers might persuade one that the "anti–theist" Christopher Hitchens is on to something. A quarter of the articles, it seems, could be summarized under the single headline "Muslims Kill Selves and Others—Again." A story on page three suggests that yet another well–known TV preacher has, at the least, failed to avoid the appearance of wrongdoing. A third article exhorts us to rejoice that Protestants and Catholics in Northern Ireland have decided to stop maiming one another, even if their key leaders still decline to shake hands. It's easy to envision the coffee–shop philosopher pushing the papers aside and wondering if it really isn't true that religion poisons everything.

But then, what does Hitchens mean by religion? Under the same umbrella he groups Mother Teresa, voodoo, the pope, "fear–ridden peasants of antiquity," Muslim suicide bombers, animists, "arid monotheism," the archbishop of Canterbury, sé;ances, Thomas Aquinas, an evangelical huckster "dressed in a Little Lord Fauntleroy suit," Muhammad, the "tawdry myths of Bethlehem," the "vapid and annoying holiday known as 'Hanukah,'" Mormons, "hysterical Jewish congregations," the "sordid" theology of Pascal, Martin Luther King, rednecks, "cobbled–together ancient Jewish books" (i.e., the Bible), WWII–era Japanese emperor worship, and male circumcision (which Hitchens describes as "mutilation of a powerless infant with the aim of ruining its future sex life").

It's true that readers would expect a review of a book titled God Is Not Great, published in a place like this, to be unfriendly. But if Hitchens had anything new and persuasive to tell us, I would say so. Alas, as the preceding paragraph suggests, we are dealing with a very intelligent and well–read author who, when it comes to "religion," is simply incapable of reason. Hitchens admires Socrates' claim to be certain only of his own ignorance. The reader wishes that Hitchens would exchange admiration for emulation. The effect of his not doing so is the feeling that one is rather in the presence of an exceedingly angry sophist, and that is sad. But it also sometimes evokes a brief giggle, as when Hitchens writes that "many religions force themselves to think of the birth canal as a one–way street, and even the Koran treats the Virgin Mary with reverence." (It must have seemed funny at the time.)

Hitchens wants to make us laugh; everyone acknowledges his skill at delivering zingers.  And given his fluency and astonishing cerebral quickness, he makes for a formidable conversationalist and debater. The problem often comes when one actually pays attention to what he says. Hitchens notices that human beings have a need to worship, but he denies that anything is to be worshipped. He criticizes the Bible for not standing up to the rigors of contemporary forensics, but he knows that ancient literature is fundamentally different from government reports. (It really is absurd to critique Genesis for not mentioning plesiosaurs and pterodactyls.) Hitchens hymns the praises of the knowledge gained from the Human Genome Project, but he doesn't mention what he surely knows—that the project's leader, Francis Collins, has made his Christian commitment quite public. Indeed, Hitchens does not recognize or allude to other highly respected scientists who, like Collins, have written on the compatibility of Christian faith and scientific discovery. (Some of them have been interviewed by Books & Culture.) If Hitchens wanted to learn that resistance to facing the scientific consensus on evolution is dimming among evangelicals, it would be easy for him to do so. He can surely find—and he did find—exemplars of the straw men he attacks, but he should be honest enough to say that that is what he is doing.

There's no question that Hitchens makes some points well, even if the points have been made by myriad others. I must agree that the Catholic Church cannot seriously maintain that its leadership is somehow in closer or truer contact with God than the rest of us. Never mind the debate over how much Pope Pius XII did or didn't do on behalf of the Jews during World War II. Read any reliable account of the papacy during the Renaissance. Somehow it's not satisfying to hear that the pope is both the Vicar of Christ and a completely time–bound human being. I understand why Hitchens is uninterested in learning about how this crooked path can be made straight.

And it's true that these problems concern "religious" people. But here we come to the really relevant point about this book's irrelevance. The overwhelming majority of people who have lived and who live now are "religious" in some way. Add to that the obvious fact (pointed to so nicely in the early chapters of Genesis) that, given enough time, human beings will screw up everything. "Religion" isn't the problem. This book could have just as easily been titled People Are Stupid. Hitchens knows this, and he has the decency to acknowledge the mind–bending atrocities committed by atheist governments such as existed in Stalin's Soviet Union and Pol Pot's Cambodia. There's a reason why people need salvation.

Hitchens calls for a new Enlightenment. But I notice that the Western Civilization textbook chapter following the one on the first Enlightenment often focuses on the French Revolution, which in part devolved into one of the world's notable anti–religion bloodbaths.

Christopher Hitchens is wrong. Intellect by itself cannot save us. As this interesting but mostly irrational tome shows, it can't even save him.

Preston Jones, a contributing editor to Books & Culture, teaches history at John Brown University. He has recently published books with InterVarsity Press and the University of Alaska Press.