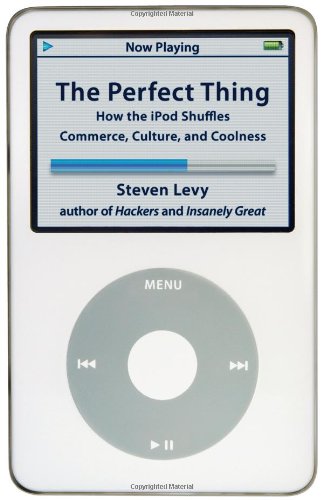 Present at the Creation

How the iPod became "the most familiar, and certainly the most desirable, new object of the twenty-first century."

My first convert—and the one I'm most proud of—was my friend and colleague Roger Lundin. I had said enough to pique his interest, and eventually he agreed to come by my apartment to explore the matter further. Less than half an hour after his arrival he had seen the light, and just a few days later he made his change of heart public: he ordered his very own Macintosh computer.

That was in the summer of 1985. As the years went by and our commitment to the distinctive Mac experience grew deeper, I must admit that along with the pleasures of camaraderie I enjoyed the pleasures of priority: I had gotten there first. But those latter pleasures began to diminish on that dark day, about five years ago now, when Roger showed me his newest acquisition: an iPod. For it may well be that, when we're old men remembering our days of glory, our grandchildren will be far more impressed by Roger's early adoption of the iPod than by my discovery of the Mac. In the long run the little music player—now the little music and media player—could very well be a much bigger thing than any personal computer.

Stephen Levy's new book The Perfect Thing explores and celebrates the brief but eventful history of the iPod, "the most familiar, and certainly the most desirable, new object of the twenty-first century." Indeed, the introduction of the iPod seems at this point one of the landmarks of the new century, along with certain darker events: it seems very strange to me that Apple's CEO announced Apple's new gadget, the company's first significant foray outside the realm of personal computers, on October 23rd, 2001—just forty-two days after the attacks on the World Trade Center and the Pentagon. Such are the oddities of memory: those attacks seem to me that they could have happened a few weeks ago, but my pre-iPod life seems to belong to a distant era, at least a decade earlier. Yet the attacks came first. "I think that we're feeling good about coming out with this at a difficult time," Jobs told Levy in a phone interview. "Hopefully it will bring a little joy to people."

It was not at all obvious at the time of Jobs' announcement that the new product would be successful. Everyone seems to have thought it very good-looking, and the idea of "a thousand songs in your pocket"—Apple's first advertising tagline for the iPod—was obviously cool. But given the gadget's price (four hundred bucks) many tech-industry analysts predicted limited sales and a niche market, if not outright failure. Boy, do they look silly now. But at the time their concerns were reasonable. There were already plenty of MP3 players on the market, and there was no reason to be confident that one more, even an exceptionally cool-looking one, would be able to make much headway, especially at a premium price.

But those skeptical analysts, understandably, failed to anticipate Apple's next moves, and failed to see what (besides good looks) set the iPod apart from other music players. After I got my own iPod and started showing it to curious family and friends, I noticed something extraordinary: even the most technologically illiterate person needed only about thirty seconds to figure out how to work the thing—it seemed to fall into a person's palm with the scroll wheel positioned just where a thumb could land on it—and in two or three minutes the novice was spinning through my music library like a DJ working a turntable. If the simple white form of the iPod with its wonderfully seamless assembly, which has gotten even more precise with each iteration of the gadget, was a triumph of design, its interface was more like a miracle. And interestingly, the idea for a scroll wheel interface came not from any of Apple's engineers, nor from the God of Industrial Design, Jonathan Ive—great is he and greatly to be praised—but from Apple's VP for marketing, Phil Schiller.

But the engineering proved crucial too. The original iPod—I'm holding mine right now (I still use it as a backup disk)—seems hulking in comparison to later models, but it does fit in a pocket, and in 2001 that seemed astonishingly small for a device containing a thousand songs. And some engineering decisions that may have seemed dubious at the time, notably making iPods compatible only with Macs that had a FireWire port for transferring data, proved to be brilliant. FireWire was relatively uncommon in 2001, but it transfers data almost forty times faster than the then-standard USB-1. Only that kind of speed made it truly feasible for people to see the iPod as a device onto which they could load, with regular updates, their whole musical library. Once other computer manufacturers saw how cool that was, they started implementing FireWire drives in their own machines, which hastened the arrival of iTunes for Windows and the expansion of iPod sales to the vast market of Windows users. (The iPod also pushed the development of the now-standard USB-2, which newer iPods use, and which is even faster than FireWire.)