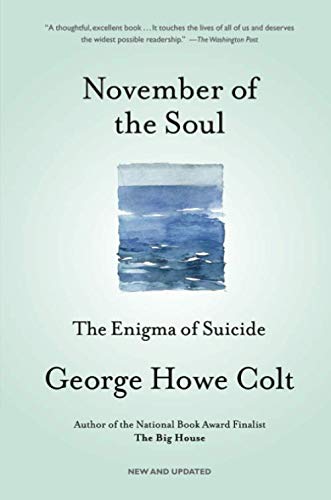 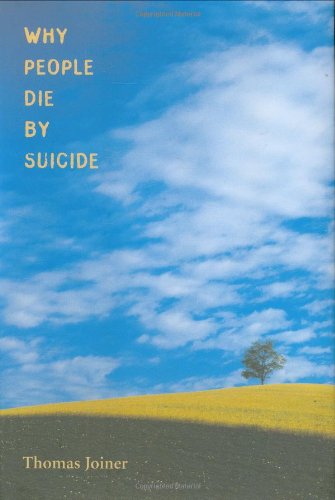 "No one knows exactly why people kill themselves. Trying to find the answer is like trying to pinpoint what causes us to fall in love or what causes war," according to George Howe Colt. But for as long as people have been male and female they've been trying to figure out falling in love, and for at least the last 4,000 years we've tried to understand death by suicide.

Colt's book, November of the Soul, first published in 1991 and now appearing in an updated edition, is an exceptionally readable, wide–ranging exploration of suicide. The title gives you a clue that Colt is going to be both literate (the phrase comes from Ishmael's description of the onset of depression in Moby Dick) and lyrical.

Colt argues that "when it comes to suicide, there is very little new under the sun." He provides a fascinating overview of how suicide has been addressed in cultures across history.  As citizens of the modern Western world, we tend to assume suicide is primarily a psychiatric problem. We study it, search for its causes, and try to prevent it. We easily forget that this view is a product of our own time and culture. In ancient Egypt, where earthly life was a mere prelude, there were no social or religious prohibitions against suicide. In pre–Christian Scandinavia, the Roman Empire, and feudal Japan, taking your own life was a reasonable and honorable option.

Colt also explores adolescent suicide, the latest biological and psychological research into suicide's causes, prevention, euthanasia and the right to die, and suicide's impact on survivors. He offers case studies with such broad scope and specific detail that you get the feeling you've personally had a long afternoon coffee with a person who was or is suicidal.

The section on euthanasia is as balanced and thoughtful a presentation as you are likely to find. Whether you'd maintain life with every medical resource available or find the phrase "death with dignity" persuasive, you'll encounter ideas and cases here that will challenge you. For the zealously pro–life, there is the example of Pope John Paul II finally refusing further medical treatment. For those who affirm the "right to die," there are frightening international examples of medical professionals not just sliding down the proverbial slippery slope, but jumping off at rates that make lemmings look like rugged individualists. In the Netherlands, 25 percent of reporting physicians admit to practicing "termination of the patient without explicit request," while 30 percent of non–reporting doctors admit that their reason for not reporting is that they failed to observe the requirements for permissible euthanasia.

Despite the wonderful descriptions, Colt offers precious little in the way of pragmatic, applicable suggestions for the reader who wants to spot and help people who are likely to attempt suicide. Thomas Joiner, a professor of psychology at Florida State University, says there IS something new under the sun when it comes to suicide, and it's this new model he presents in Why People Die by Suicide.

As the son of a man who committed suicide, Joiner brings an emotional sensitivity that is haunting. As a scientist he is interested in the broad range of research about suicide. As a clinician, he addresses the practical implications of what we do and don't know about suicide today.

Joiner's goal is to build on existing models and take into account statistics from around the world. As a clinician I found the extensive clinical and epidemiological evidence intimidating. Many lay readers will find it baffling.  The research includes striking details—for example, in the United States, men are four times more likely than women to die by suicide while women are three times more likely than men to attempt it. Moreover, these ratios are fairly consistent around the world—except for China, where rates are equal between the genders.

The detail is admirable but a bit overwhelming. Fortunately the theory is clear. The desire to live can be undermined if two bedrock needs are unmet: the need to belong and the need for a sense that we are effective. A fully satisfied need to belong requires interactions with others and a feeling of being cared about. When an individual moves from the frustration of feeling incompetent to feeling so ineffective that loved ones are threatened or burdened, he has reached a vulnerable state. Neither failed belongingness or perceived burdensomness alone is enough to instill the desire for death. But when these states co–occur the desire for death is produced.

The desire for death is not sufficient to produce suicide. Joiner overwhelmingly convinces us that the desire for life is much more difficult to overcome than casual readers would assume. He says a third factor, the ability to enact lethal self–injury is required before a serious attempt at suicide is possible. This ability to enact lethal self–injury is acquired, based on previous experiences that allay fear, inure people to pain, and build knowledge that favors self–injury.