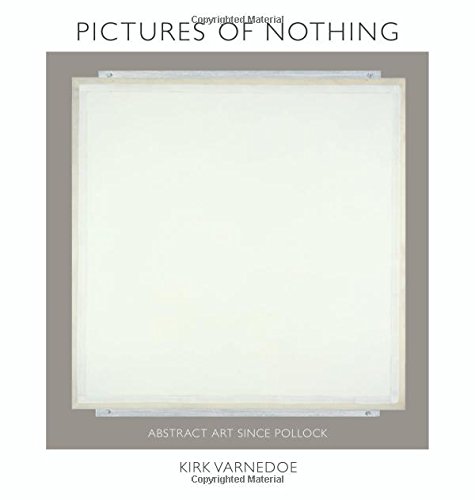 Pictures of Nothing: Abstract Art since Pollock (The A. W. Mellon Lectures in the Fine Arts)
Kirk Varnedoe
Princeton University Press, 2006
320 pp., 55.00

There is a pivotal scene in the film Walk the Line (2005) when the record producer Sam Phillips interrupts Johnny Cash's audition to tell him that he doesn't believe him. Phillips says, roughly:

If you was hit by a truck and you were lying in the gutter dying and you had time to sing one song before you turn to dirt, one song that lets others and God know about how you felt about your time on this earth . . . that sums you up, you tell me that you would sing that song, about how you are filled with joy and that you're gonna shout it? Or would you sing something different . . . something real?

Pictures of Nothing: Abstract Art Since Pollock is Kirk Varnedoe's one song. Varnedoe was indeed hit by a truck, in slow motion, having been diagnosed with cancer in 1996. Nearly five years later, his cancer had spread, and so Varnedoe, Chief Curator and Director of the Department of Painting and Sculpture at New York's Museum of Modern Art since 1989, was forced to resign in favor of a faculty appointment at the Institute for Advanced Study at Princeton, which would allow him time to complete one last project: his contribution to the prestigious A. W. Mellon Lectures in the Fine Arts at the National Gallery of Art in Washington, D.C. According to his friend and collaborator Adam Gopnik, "He supposed these lectures to be his last and intended them to be his most important work, his testament of faith. He poured his whole life into them." Varnedoe delivered them from March 30 to May 11, 2003. Three months after his sixth and final lecture he was dead at the age of fifty-seven. Three years later these lectures have been published in book form. The lectures are remarkably fresh and conversational—not only because Varnedoe did not have a chance to edit and revise them, but also because he gave these lectures, as he did every other lecture, entirely from memory.

Varnedoe's choice of topic was abstract art. While angering the vast majority of those who care little about art and confusing those who claim to care some about art, abstract art continues to vex even the specialists. Varnedoe's title is a pejorative phrase that he ironically appropriated from the notoriously sharp-tongued critic William Hazlitt, who described some of British painter J. M. W. Turner's misty, quasi-abstract landscapes of the 1840s as "pictures of nothing." By contrast, Varnedoe's lectures reveal the positive role of abstract art in modern cultural life.

Where Christian and secular prophets of artistic and cultural doom see nihilism and decay, Varnedoe sees infinite variety and creativity: "abstract art," he writes, "while seeming insistently to reject and destroy representation, in fact steadily expands its possibilities." He continues, "abstract art is a remarkable system of productions and destructions that expands our potential for expression and communication"

Abstract art invites us to perceive finer and finer distinctions of line, form, color, and, most importantly, intention: "the less there is to look at, the more important it is that we look at it closely and carefully. This is critical of abstract art. Small differences make all the difference."  Popular wisdom considers abstract art an excuse for "tenured radicals" to disguise "bad art" in the cloak of theory, art that doesn't reflect "skill" in rendering likeness. On the contrary, Varnedoe insists; abstract art is difficult, it takes practice to understand, and if it is governed by rules that appear arbitrary, that only makes it like every other cultural practice.

But unlike many defenders of abstraction, Varnedoe was never besotted with academic theory. "Between the vague confusions of individual experience and the authority of big ideas," he writes, "sign me up for experience first" Pictures of Nothing is about looking closely at abstract art, something that very few culturally conservative critics, including Christian commentators, have done. Varnedoe takes very seriously Frank Stella's quip about his paintings: "What you see is what you see."

Varnedoe's lectures start with Jackson Pollock's drip paintings, then move to Frank Stella's strip paintings of the late Fifties and the Minimalists Donald Judd, Robert Morris, and Carl Andre. He then looks at work influenced by the aesthetic vocabulary of Minimalism, such as Eva Hesse's organic constructions, the site-specific work of Michael Heizer and Robert Smithson, and the early Richard Serra.  Exploring satire and irony in abstraction, which typically plays off resemblances between abstract art and representational art, Varnedoe discusses the work of Robert Rauschenberg, Jasper Johns, Andy Warhol, Gerhardt Richter, and Cy Twombly. He concludes with a look at contemporary abstraction: Brice Marden, Robert Ryman, and Richard Serra's recent work .