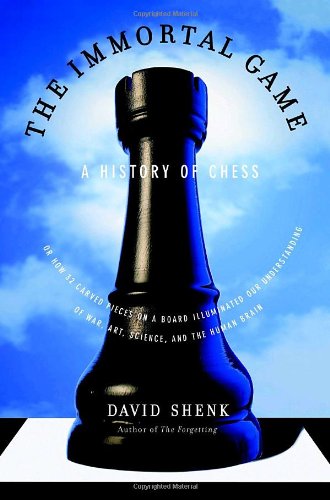 The Immortal Game: A History of Chess, or How 32 Carved Pieces on a Board Illuminated Our Understanding of War, Art, Science and the Human Brain
David Shenk
Doubleday, 2006
352 pp., 26.00

Not Just Another Game

How to think about chess.

David Shenk opens his history of chess with a disturbing portrait of the artist Marcel Duchamp, who moved from painting (Nude Descending a Staircase) to conceptual art before devoting much his life to the pursuit of beauty at the chessboard.

To casual players, Duchamp's decision may seem ludicrous. Why give up a critically acclaimed art career in order to spend every waking moment poring over a little checkered board? But this is Shenk's point. He wants to provoke us to question our accepted scale of values, our condescension to chess as a mere game. (Of course, Duchamp's case also has to do with a radical revaluation of "art," but that's another story.)

Beginning with Duchamp, Shenk's book pushes the reader to appreciate the game's deep history and the profound aesthetic and social questions that it raises. Shenk's hyperbolic subtitle encapsulates his own view of the game's value. Alas, his journalistic style has difficulty bearing the weight of his own thesis. Shenk is attempting to establish a layman's road map through the complex world of chess, but he seems crippled by the op-ed instinct, sometimes painting his own conclusions on the subject as if they were obvious and indisputable.

In chapter 12, for example, Shenk attempts to connect chess to public education, emphasizing the game's value as an indispensable tool for the mental fitness that is necessary to compete in today's world. He reports on his visit to a New York public school, where he interviewed a chess teacher and sat in on several chess classes. Shenk observes the hesitant, bumbling attempts at pawn-play by the second-grade novices and then fast-forwards to the excited game analysis and concentrated thought demonstrated by the advanced fourth- and fifth-grade class. Inspired by the enthusiasm of the advanced class and impressed by their proficiency in the language of the game, Shenk ends the chapter with confident assertions of the ability of chess to mentally prepare young people for the meritocracy of the global economy.

And that's not the only reason to make chess a part of the curriculum. Chess, it turns out, is also an antidote to "fundamentalism." Indeed, Shenk gets a bit carried away at the end of chapter 12, preaching a standard postmodern mini-sermon against the follies of "fundamentalist ideologues" who "stop thinking" simply because the truth has become "slippery." In contrast, he claims, the emphasis chess places on flexible problem-solving could be an important part of our public education, fitting our children to avoid fundamentalist beliefs as well as preparing them to compete in the global marketplace.

Hmmm. As a sport, chess may indeed instill good mental habits in its practitioners, but will those practitioners ever have access to the educational and entrepreneurial opportunities necessary to achieve success in the global environment? Russia, probably the most chess-infused state on earth, is also famed for its corruption and the tremendous concentration of economic power in a few hands. While the Russian chess machine is fearsome over the board, the millions of Russian pawn-pushers have hardly overwhelmed the Russian economy with their transferable skills, nor have Russian chess players astonished the world with their staunch commitment to the flexible thinking championed by postmodern humanism. If anything, Russia appears to have experienced a modest religious revival, with many young people returning to their Christian roots.

Despite such flaws, The Immortal Game is both interesting and thought-provoking. Shenk is certainly correct in assuming that  a 1,400-year-old board game whose rules have not been changed in 500 years must have some value beyond mere recreation. This game's lifespan is particularly impressive given the notoriously short attention span of the modern consumer. Most video games are hopelessly out of date after three years. Even traditional favorites like backgammon have been mutable over the centuries, making it difficult to trace a concerted history.

But chess has been different. Shenk argues that chess has played a significant role in human history because of its supreme capabilities as a powerful, accessible metaphor. While Shenk's description of the game as "the PowerPoint of the Middle Ages" is a bit silly, I think most chess players would agree that the game has a strange, mirror-like quality. Chess seems to be able to absorb the complexities of a real-world problem while maintaining much-needed symbolic clarity and detachment.

Throughout the book, Shenk argues strongly that much of chess' metaphorical power stems from its mathematical nature. He even suggests that the moves of the chess pieces were based on ancient numerology, which was fascinated with the numbering relationships found in mathematical magic squares. Such speculation aside, it makes sense that the mesmerizing power of the game derives from the mathematical world that the pieces inhabit. A knight or bishop will always move the same way, but the common board multiplies the capabilities of individual pieces exponentially, so that a 32-piece symphony can dazzle the mind.