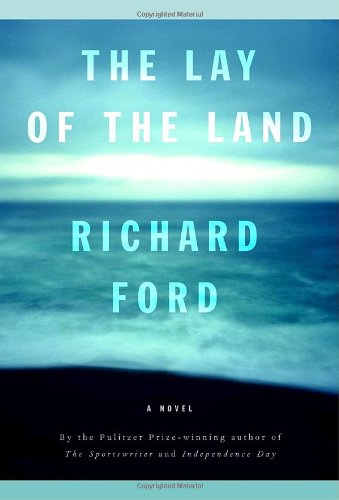 Richard Ford concludes his trilogy about Frank Bascombe, first introduced in The Sportwriter.

Iwas immediately drawn to Richard Ford's work almost a decade ago, when he published Independence Day, the Pulitzer Prize-winning novel of 1995. It was very specifically the title that caught my eye that day, standing in a Barnes & Noble. The gleaming paperback cover showed an American flag, set strikingly against a grassy background. In reading the novel for the first time, I was struck by the existential morass of the protagonist, one Frank Bascombe, who on the surface seemed about as rebellious as a Wendy's franchise. And yet the novel revealed his more subversive underside, and contained many meditations on the issues at the heart of American culture: the pros and cons of "independence," or what independence actually might mean, and how our insistence on independence often comes at the price of alienation, insularity, and broken down relationships, especially with families.

These themes are prominent in Ford's first Frank Bascombe novel, The Sportswriter, which had appeared about a decade earlier, in 1986. And now comes the third installment of the Frank Bascombe saga, The Lay of the Land. Since Ford has assured his loyal readers that this will be the last novel of the series, we can call it the final work of the Bascombe trilogy. Comparisons with other highbrow fictional series by writers of Ford's stature are inevitable, especially John Updike's Rabbit Angstrom tetralogy. The Lay of the Land is somewhat along the lines of Rabbit Is Rich, Updike's third installment. Both protagonists are in their fifties, financially comfortable, and yet veering off rapidly from their unpredictable and adventurous younger days toward a repetitive life of failing bodies, failing sexuality, and failing relationships.

Among Ford's own novels, The Lay of the Land is most obviously like Independence Day, in terms of tone, content, and general conclusions. Ford seems particularly interested in creating an account of the psychological stages of contemporary American men of a certain age. This approach is notable especially in the vocabulary that Frank invents to talk about it. In Independence Day, much of Frank's meditation involves what he calls the "Existence Period," during which we work hard, pay our bills, and try not to let the vast wasteland of our culture intrude too much. In Lay of the Land, Frank has now moved into the "Permanent Period," in which acceptance is the key precept. Accept the fact that you will never do certain things in life that you once imagined you would do, like climbing the Himalaya, flying an airplane, or having an affair with a movie star. Your life, as Frank reminds us over and over, is what it is. Your destiny has been determined, your legacy complete. For Frank, this legacy consists largely of a highly lucrative realty business in central New Jersey and a fairly screwed up family situation.

Another symptom of this structure is Ford's use of holidays as the settings for the three novels in the trilogy. The first novel, featuring front and center the death of Frank's first son and his subsequent divorce, takes place over Easter; the second novel, as the title indicates, has Frank trying to reconnect with his troubled younger son Paul over an Independence Day weekend. In The Lay of the Land, all the action occurs in the week leading up to Thanksgiving 2000. Thus does Ford inject into the brew some serious consideration of thankfulness and the final acceptance of his lot in life. Meanwhile, its setting in 2000 coincides with the brouhaha over the Florida election results. Frank's frequent snide remarks (especially bitter regarding our current president) serve as a convenient commentary on the mess in which our nation has found itself, and though the action is pre-9/11, readers will surely be reminded of it and the Iraq fiasco by Ford's remarks about the botched handling of the Florida vote.

Besides the election fiasco, however, poor Frank seems to encounter more difficulties over the space of just a few days than many of us will in a decade.  He is battling prostate cancer. He is dealing with the loss of his wife Sally, who runs off with her supposedly dead first husband (who suddenly shows up, very much alive). Frank's two surviving children are now grown up and deeply troubled on their own. He gets into a brief bar fight. He stumbles onto a terrorist bombing at a hospital, and becomes either a witness or a suspect (it is not clear which). He gets stuck in his car without the keys. Finally, his loud, nutty neighbor is accosted by Russian teenagers on dirt bikes, during which attack Frank is shot twice in the chest.

And yet, somehow, Frank does seem to come away thankful. As always, Ford is both a master stylist and a very funny writer. He is almost unbelievably observant of details—sort of a postmodern Henry James. Thus does the novel have much to offer. It will almost certainly be nominated for major literary awards.