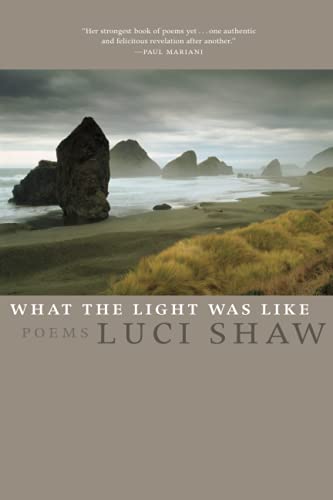 A volume of new poems from Luci Shaw.

Luci Shaw expects to find truth within the world, because it's God's world; she expects it to make sense because it was designed by the master artist. In "As Iron on Iron," she writes:

Walking this morning, I began to think
how everything wears its other down. How
this sidewalk smoothes my rubber soles …
how a prevailing wind shapes trees
and bends them to its gusting will.

Shaw's recent collections are united by themes. Waterlines (2003) examines water in all its diverse forms, and The Green Earth (2002) shows us the natural world. Both of these books combine selected poetry from her long career with new poems that fit the given topic. Not only have many of these poems appeared before, but there are even a few that are in both volumes. The good news for those of us who already know and appreciate her poetry is that her latest is a book of new poems. (I did notice, though, that "Singing Bowl" is reprinted from Water Lines — with some minor changes, which is her tendency.)

The title, What The Light Was Like, comes from the years of correspondence Luci has maintained with her friend, the poet Margaret Smith. When Luci or Margaret had been on a trip, the traveler would often send a postcard with some description of the light in that place.

Postcards have long been a favored mode of communication for Shaw — as she mentions in the foreword. And although e-mail has replaced the sending of most postcards, she still finds them appealing, in their finely focused, personally handwritten glory.

References to quality of light appear in poems throughout What The Light Was Like. In "Without Shadow," for example, Shaw takes us into a fog where "the road fades / to a pale nothing behind me" and "the sharp purity of morning has been / diminished." She says in "Christa's Apples" that "it seems the sky has spread / a layer of clear happiness over the streets / still damp from last night's rain. Something about the light / unclenches me." Later she observes "the way light / offers itself without measure." With other poems such as "Light Gathering, January" and "Moon Shine," you only need the titles to see that the connection continues.

This collection is not tied to its light theme so closely, though, that outstanding poems on other topics needed to be eliminated. Consider "Peterson's Privy" — a funny poem about what was discovered when an outhouse belonging to Eugene Peterson (The Message), was torn down. Similarly Shaw's midrash on the thir chapter of James—"What James Didn't Say About the Tongue" —is not only wittily thought-provoking but also sends us back to Scripture to further consider what James did say.

Although I've read Luci Shaw's poetry for years, it seems that she's now letting readers in, a little deeper into her life. Her troubled relationship with her mother comes through in a few poems. In "How to Raise Faultless Flowers" she shows us the "British gentlewoman" who seemed more interested in flowers than children: "She had such good taste it was hard / to please her." In "Wrong Turn" the poet finds "old letters from my mother . . . that sweetened what had been deeply sour," while "In Reverse" adds that she desires "a soul so fresh that / I may love my mother again."

What The Light Was Like also includes the first appearance of the beautiful Advent poem "Breath." It begins with Christ "in the cavern darkness", but then "his eyes widened to see the supple world / his lungs had breathed into being." Here the light connection fades, for she asks, "could he have known that breathing / trumps seeing?" Instead of alluding to the predictable image of Jesus as the Light, the poem concludes with his breath changing the world.

Shaw repeatedly embraces the truths that are revealed to her through metaphor—as in "Revival":

March. I am beginning
to anticipate a thaw. Early mornings
the earth, old unbeliever, is still crusted with frost

She then describes the lengthening light as "preacher / of good news, evangelizing leaves and branches", and further down shows us her own face "drinking in heat  / and light like a bud welcoming resurrection"—an image perfectly suited to sum up this lovely volume.

D.S. Martin is a Canadian whose poetry has appeared in journals such as Arc, Canadian Literature, The Christian Century, The Cresset, Crux, Mars Hill Review, and Windhover. He has written about poetry for Rock & Sling, Image, Faith Today and Books & Culture. (ds_martin@yahoo.com)