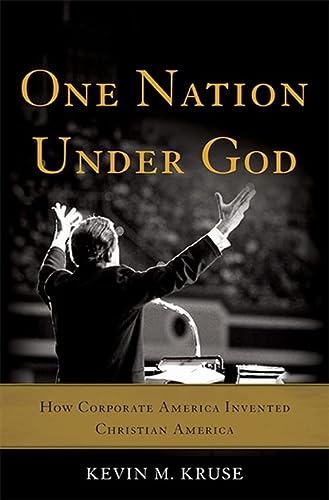 One Nation Under God

This is a guest column by John Fea, who teaches history at Messiah College. His new book, The Bible Cause: A History of the American Bible Society, will appear in May 2016 with Oxford University Press. Fea blogs daily at www.philipvickersfithian.com

On March 23, 2015, Ted Cruz, the junior senator from Texas and the darling of the Tea Party movement, announced that he would be running for President of the United States. The announcement was made at Liberty University in Lynchburg, Virginia, a school founded by the late culture warrior and fundamentalist Jerry Falwell. The Texas senator used his speech to expound upon the Christian roots of America, the "mischiefs of government," American exceptionalism, economic growth, and religious liberty. Anyone who reads or listens to his speech would conclude that Cruz believes these ideas all stem directly from the pages of the Bible.

As Princeton historian Kevin Kruse reminds us in his new book One Nation Under God: How Corporate America Invented Christian America, Cruz's message of faith, freedom, and free enterprise has a long 20th-century history. According to Kruse, the belief that the United States is a Christian nation—an idea that continues to hold weight among Republican politicians and many ordinary evangelicals—can be traced back to the "Christian libertarians" of the 1930s who opposed FDR's New Deal. Whenever and wherever Christian nationalism thrived in modern America, businessmen and other advocates of free markets and limited government were there. As his subtitle suggests, Kruse sets out to show "how corporate America invented Christian America."

Kruse tells the story of Christian nationalism in the United States from the Great Depression to the Nixon Era. In the process he introduces us to characters who seldom find their way into the traditional narrative of 20th-century American religious history. For example, in 1935 James Fifield, the pastor of the lavish First Congregational Church in Los Angeles, founded an organization called Spiritual Mobilization for the purpose of spreading the belief that Christianity and capitalism were inseparable. Fifield recruited corporate leaders from General Motors, General Electric, Standard Oil, and Mutual Life to his cause by convincing them that FDR's welfare state was sinful because it threatened individual liberty and the God-ordained free market. By the 1940s and 1950s, Spiritual Mobilization was leading "Freedom Under God" celebrations throughout the country and promoting "Independence Sunday" events in local Protestant churches.

Fifield's Christian libertarian vision would find an ally in Billy Graham. Kruse downplays Graham's staunch anti-communist sermons, focusing instead on his pro-business and anti-labor rhetoric. Such an emphasis is part of Kruse's larger thesis about the roots of the religious revival sweeping the United States in the immediate wake of World War II. Conventional wisdom suggests that this revival, and especially the various manifestations of civil religion that accompanied it, can be explained by Americans' desire to distinguish themselves from the godless communism of the Soviet Union. For Kruse, the attempt to make America "one nation under God" had its roots not in the Cold War, but in attempts by Christian libertarians like Fifield and Graham to defeat a more imposing danger than the Soviets—the state power brought about by the New Deal.

The Christian libertarianism of the 1930s was co-opted in the 1950s by Dwight D. Eisenhower. A deeply religious man with roots in River Brethren Anabaptism, Ike believed that the United States government was based on Christian principles, but he was no libertarian. In fact, he believed that religion was needed to strengthen the state rather than tear it down. It was under his administration that the Cold War replaced the New Deal as the primary enemy of Christian nationalists. Though Christian businessmen and those Protestants aligned with the Goldwater wing of the Republican Party wished that Eisenhower would talk more about the relationship between Christianity and free markets, and perhaps even roll back the welfare state, they were happy that the President was willing to bring businessmen into his cabinet and religion into the halls of American power.

According to Kruse, America became a Christian nation for the first time during the Eisenhower administration. When in 1953 the National Association of Evangelicals issued its "Statement of Seven Divine Freedoms," a decree that basically declared that the United States was founded on biblical principles, Eisenhower was the first to sign it. By 1960, the phrase "Under God" was added to the Pledge of Allegiance and the phrase "In God We Trust" was printed for the first time on paper currency. Both initiatives had overwhelming bipartisan support.

In corporate America, Walt Disney embraced Eisenhower's God and country vision and added Christian nationalist features to his theme park in Anaheim. The Advertising Council launched a "Religion in American Life" campaign that featured advertisements encouraging Americans to attend religious services. And Cecil B. DeMille, a harsh critic of the New Deal and supporter of Fifield's Spiritual Mobilization, used his movie The Ten Commandments (1956) as a means of displaying the religious roots of resistance (Moses and the Hebrew God) against government tyranny (Ramses II).

Eisenhower's vision of a Christian America met some major setbacks in the 1960s. Kruse's chapters on the Engle v. Vitale case (1962) that ended prayer in public schools, and the Abington v. Schempp case (1963) that ended mandatory Bible reading, are excellent. He also shows how Richard Nixon, a president not normally championed by the Christian Right today, used Graham to help him bring the corporate world and the Christian world together. Nixon held regular services in the White House to which he invited corporate leaders with religious sensibilities. Graham was often the guest preacher at these services.

In the end, Kruse advances our knowledge of the contests over the separation of church and state in 20th-century America in two major ways. First, he calls attention to the important role that the opposition to the New Deal played in the development of Christian nationalism. Second, he shows that figures like David Barton and Ted Cruz, to the extent that they believe America needs to "return" to its Christian roots, are nostalgic not for the era of the American founding—few of them want to go back to wearing tri-cornered hats and wigs—but for what they perceive to be the golden age of the Eisenhower era.

Anyone familiar with contemporary attempts by Cruz and others to conflate economic liberty and Christian nationalism will find a lot that is familiar in Kruse's book. Fifield, for example, anticipated Glenn Beck when he railed against the welfare state and preached a version of Christianity that celebrated individual salvation over collectivism and the gospel of social justice. Well before the heyday of Falwell and Barton, Eisenhower talked endlessly about Thomas Jefferson's assertion in the Declaration of Independence that individual rights stemmed from "the Creator" and boldly proclaimed that "without God, there could be no American form of Government, nor an American way of life."

In the end, Kruse should be careful about claiming too much. Did Fifield, Eisenhower, Graham, and Nixon set out to unite businessmen and religious leaders for the purpose of creating a Christian nation? Yes. In this regard Kruse has made an important and singular contribution to our understanding of religion and politics in the 20th century. But was this the first time in American history that such an attempt to forge a Christian nation was made, as Kruse seems to imply throughout the course of the book? No.—John Fea