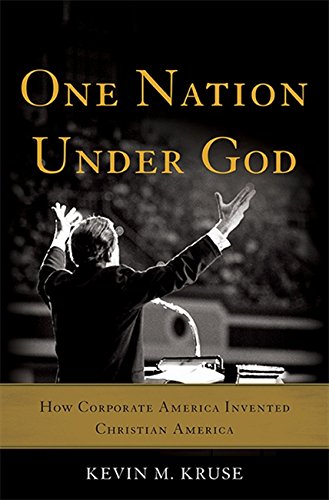 One Nation Under God

This is a guest column by John Fea, who teaches history at Messiah College. His new book, The Bible Cause: A History of the American Bible Society, will appear in May 2016 with Oxford University Press. Fea blogs daily at www.philipvickersfithian.com

On March 23, 2015, Ted Cruz, the junior senator from Texas and the darling of the Tea Party movement, announced that he would be running for President of the United States. The announcement was made at Liberty University in Lynchburg, Virginia, a school founded by the late culture warrior and fundamentalist Jerry Falwell. The Texas senator used his speech to expound upon the Christian roots of America, the "mischiefs of government," American exceptionalism, economic growth, and religious liberty. Anyone who reads or listens to his speech would conclude that Cruz believes these ideas all stem directly from the pages of the Bible.

As Princeton historian Kevin Kruse reminds us in his new book One Nation Under God: How Corporate America Invented Christian America, Cruz's message of faith, freedom, and free enterprise has a long 20th-century history. According to Kruse, the belief that the United States is a Christian nation—an idea that continues to hold weight among Republican politicians and many ordinary evangelicals—can be traced back to the "Christian libertarians" of the 1930s who opposed FDR's New Deal. Whenever and wherever Christian nationalism thrived in modern America, businessmen and other advocates of free markets and limited government were there. As his subtitle suggests, Kruse sets out to show "how corporate America invented Christian America."

Kruse tells the story of Christian nationalism in the United States from the Great Depression to the Nixon Era. In the process he introduces us to characters who seldom find their way into the traditional narrative of 20th-century American religious history. For example, in 1935 James Fifield, the pastor of the ...