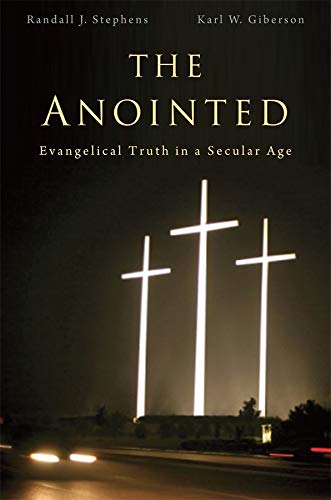 Thanks for Jay Green's critique ["Making It," May/June] of The Anointed by Randall J. Stephens and Karl W. Giberson and their "safely NPR-proofed" views "demonstrat[ing] their own professional-class bona fides." Such views are often fashion statements designed to gain entrance into what C. S. Lewis called "the Inner Ring." Green terms it "the well-heeled urban élite" in "places like Berkeley and the Upper West Side."

We Bible-believers are outsiders: "our religion contains a great many things that will forever seem weird and offensive" there: e.g., the NT's teaching against homosexuality (Rom. 1:27; 1 Cor. 6:9; 1 Tim. 1:10) and this citing of Bible verses.

NPR is not a bad example. Its "All Things Considered" presents meat-and-potatoes information useful for most everyone, but enough hors d'oeuvres, special dessert items, and exotic beverages—a Thai musician mixing Thai music with jazz—that very few have a "need to know" but that many could use to good advantage at a party in Berkeley or the Upper West Side.

Christ exposed the basic fallacy in John 5:44. "How can you believe, when you receive glory from one another and do not seek the glory that comes from the only God?" Spiritual truth cannot be packaged and processed to gain status. The two functions are contradictory.

Raw, unprocessed, under-interpreted items of information—like raw Bible verses—are low-status in this urban and urbane setting where information, like food, is highly processed. The style, creativity, and fame of the processor give it status. So does the social standing of others who know it. That there is no "need to know" complements its status function; it need not pass the test of solving a problem or helping one to survive a crisis. If it gains one a higher status, it has done its job.

The Inner Ring exists in Christian circles, judging by Joel Carpenter's "The Conversation" [May/June, Stranger in a Strange Land], occasioned by a collection of articles from The Reformed Journal (RJ). Located "next to the Borkum Riff pipe tobacco" at the Calvin College bookstore, the RJ was read by "opinion shapers" plus "the more intellectual sort of Christian Reformed pastors and missionaries." The RJ had "a certain style," "more like jazz than like sonatas." In one article, "the deeper intellectual play commenced, riff upon riff, showing the various ways the truth penetrates and bounces off the episode."

Intellectual "riffs" fit next to Borkum Riff: products conferring status on the user. No doubt, the RJ's articles were more substantive. So this is a bit unfair. It's not easy to summarize a collection of disparate articles. Yet this guest-column arouses a Bible believer's suspicion that our theological controversies are not being decided on their merits, on what the Bible says, but on what views have a higher status among "the more intellectual sort." This column exhibits that "breath-taking condescension toward evangelicals," the great unwashed multitudes in the pews, that Green diagnoses in The Anointed. Spiritual status is also an oxymoron in Christian circles.

One can wear Calvin Klein designer socks for the status and not harm their usefulness as socks. The NT states that God designed status-seeking to contradict spiritual knowledge. Jay Green alludes to 1 Corinthians 1:18-31. "Has not God made foolish the wisdom of the world?" (20b).

Worldly mixed motives obfuscate. Readers cannot trust that an argument is made for the reasons stated. No government agency requires a list of the real spiritual ingredients in highly processed information. We will be tricked into making faulty decisions on grave spiritual matters. Lewis argued that the Inner Ring was an informal ranking alongside the formal one; its status-seeking results in debates where the real reasons lie hidden inside the external, ostensible reasoning.

As Green writes, we may escape "the scandal of the evangelical mind" only to "become party to a scandal far greater than anything related to intellectual life." God may make our wisdom foolish. There has been a scandal of shallow evangelical thought. Close study, accuracy, and the non-profit search for knowledge are needed virtues. Yet if a scandal of low evangelical status was our real, underlying concern, then we will end up replacing one error with another.

Alvin Plantinga ["Providential Evolution," May/June] draws attention to the distinction between guided and unguided evolution. Those advocating the unguidedness of evolution claim its humanly unpredictable nature as evidence. However, in that regard it is no different from the course of human history. No one should take seriously the claim that God couldn't be in control of history simply because we can't predict how it will go. There are trends in the histories of humans and of life, but few absolute rules. Flipping a coin does not challenge the doctrine of providence, yet it is just as random as genetic mutations. (The degree to which evolution should be seen as random in any scientifically measurable sense remains debated. Simon Conway Morris, among others, has argued that basic physical laws constrain evolution.)

I agree that Karl Giberson and Francis Collins' approach to theodicy is not satisfying. But why God allowed plenty of animal death and suffering before the fall of man seems minor in comparison to the question of why he would allow the Fall itself, a problem not solved even if one denies the unambiguous evidence of geology, paleontology, genetics, biology, and the like on the long histories of parasitism, disease, predation, and death. Indeed, the theological problems raised by evolution are almost always merely variants of questions recognized long before significant study of geology took place.

Any view that does not hold that God nearly always acts through natural laws denies either everyday experience or else God's sovereignty. Every moment there are innumerable instances of things that take place through natural laws, but clear examples of acting otherwise are exceptional. Even biblical miracles generally involve the bare minimum of actually setting aside natural law, in contrast to apocryphal stories. Perhaps Horace's doubts about deus ex machina solutions have more to them than merely artistic taste. Of course, part of the debate regarding the prevalence of intervention-style action by God relates to different perceptions as to whether key steps in the process of evolution really were big enough problems to require a designer to step in to solve them. But it should be clear that there is no theological problem (though perhaps an exegetical one) if indeed creation has taken place almost entirely by ordinary physical means.