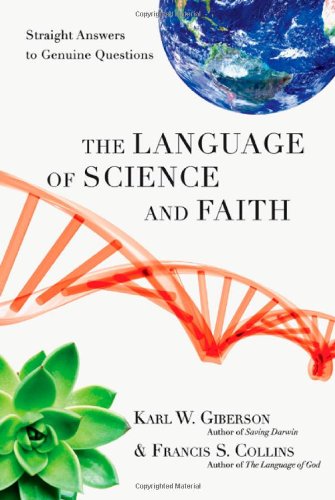 Editor's Note: This piece first appeared in the May/June 2012 issue of Books & Culture. It seems worth a second look, especially in the aftermath of the Ham-Nye debate.

One of the authors of this book is Francis Collins, who spearheaded the Human Genome Project, is presently director of the National Institute of Health, and founded the BioLogos Foundation (from which he resigned to accept the NIH position); the other is Karl Giberson, director of the Forum on Faith and Science at Gordon College, and former executive vice president of the BioLogos Foundation. According to the preface, Giberson did the actual writing. The book began life as answers to "Frequently Asked Questions," questions sent in to Francis Collins in response to his best-selling The Language of God: A Scientist Presents Evidence for Belief. Collins founded the BioLogos Foundation partly in an effort to find a way to respond to these many questions. According to the BioLogos website, "We have found that the methods of the natural sciences provide the most reliable guide to understanding the material world, and the current evidence from science indicates that the diversity of life is best explained as a result of an evolutionary process. Thus we affirm that evolution is a means by which God providentially achieves His purposes."

The Language of Science and Faith is something like an elaboration and defense of this platform. There are chapters devoted to the evidence for evolution and for the Earth's being billions of years old. There are chapters addressing the question of the relation of science to religion, and of scientific truth to scriptural truth. There is a statement and endorsement of fine-tuning arguments for theism, and an effort to harmonize current evolutionary theory with what is being taught in the first chapters of Genesis: here the crucial question is whether we are to take it that there was in fact a first pair of human beings, Adam and Eve, who fell into sin.

C&G endorse evolution, by which they seem mean at least (1) that the Earth is very old; (2) all of the enormous variety of the living world has come to be by way offspring differing; usually in small ways, from their parents; (3) that we human beings have simian ancestors; and (4) that any two living creatures have a common ancestor, so that you and the dandelions in your back yard are in fact cousins—distant cousins, but cousins nonetheless. (A whole new light on family reunions?) Suppose we use the term "evolution" to denote these four theses. C&G also endorse theistic evolution, although it is not entirely clear just how they think of God as related to the process of evolution.

Another thesis often included under the heading of evolution is Darwinism, the thought that what drives the whole process of descent with modification is natural selection working on some form of genetic variation: the most popular candidate here is random genetic mutation. I'm inclined to think C&G endorse Darwinism, but whether they do is not entirely clear.

Many evangelical Christians, of course, reject theistic evolution. Indeed, feeling runs high and language gets pretty heated in this area. On the blog "Uncommon Descent," for example, we find theistic evolutionists described as "ridiculously evasive," "useful idiots" (useful to the secularists, that is), and "extremely naïve." They are "snakes in the grass who knowingly promote a 'strong' view of evolution (the essentially atheistic idea that it's unguided and that purpose is an illusion) while engaging in misdirection to obscure that fact"; they are said to take "an irrational and heretical posture." True: the blogosphere is not noted for judicious, temperate, measured comment; still, the tone and ferocity of the discussion is noteworthy.

C&G do a nice job of presenting the evidence for evolution (the above four theses), which does indeed seem substantial. Of course different parts of the theory have different degrees of support: there seems to be massive support for the idea that the Earth is very old, but somewhat less support for the other three components of evolution as described above, if only because of the possibility that God did something special in creating human beings. As far as I can tell, they don't present any evidence for Darwinism as distinguished from evidence for (1)-(4). And indeed the evidence for Darwinism is much more tenuous.

A central concern here, of course, is the question of how to understand the early chapters of Genesis. Many contemporary Christians believe that these chapters are to be taken literally, as a historically accurate account of God's creating the world. If we follow them, Genesis seems to tell us of a time not long ago—adding up the begats and lengths of lives, maybe six to ten thousand years ago—when God created the world in six 24-hour days. There is the picture of waters under the earth and waters above the earth, the vast dome of the firmament, and the assertion that before Creation, "the earth was formless and empty, darkness was over the surface of the deep." God created plants before the sun. He created Adam and Eve, placing them in a garden and commanding them not to eat the fruit of the tree of the knowledge of good and evil; if they do, God says, they will surely die. A talking serpent appears, persuading Eve that what the Lord says is not in fact true; Eve takes fruit from the tree of the knowledge of good and evil and convinces Adam to do the same. As a result of this sin, death enters the world, as does all the suffering and the evil our world displays.

Addressing Mr. Cowles' questions. First, I believe Mr. Nixon's uncle was appealing to morality as something not explained by evolution. Other aspects of human culture have been raised as well - poetry, music ... etc. These subjects (connection of these and other aspects of human culture to a necessisity driven by evolution) have been explored, but the answers seem circular to me. That does not argue against evolution, only against blind evolution as the sole explanatory factor for the way we are now. Second, I agree that for something to be scientific it must be falsifiable. But does that mean only falsifiable things can be true? Is science the only avenue for truth? That is a common assumption in our world, but that leaves a number of aspects of life - love, purpose, meaning, beauty - beyond the realm of truth. Denying the possibility of a God who chooses not to leave physical evidence of all of his activity is to, I believe, beg the question.