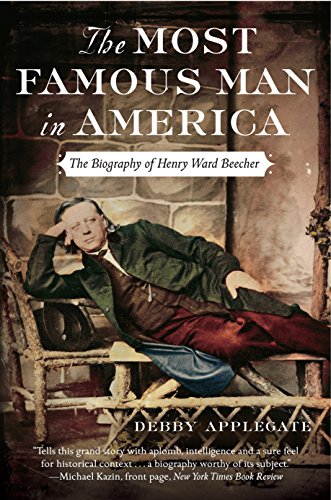 Henry Ward Beecher, the son of a New England divine and brother to the author of Uncle Tom's Cabin, Harriet Beecher Stowe, became the most celebrated preacher of the Civil War era. The subject of Debby Applegate's Pulitzer Prize-winning biography, The Most Famous Man in America, Beecher is also remembered for a sex-scandal that played out on the front pages—a tabloidish drama that will remind many readers of the Clinton-Lewinski affair. The obvious parallel may well account for the biography's publication to a wide audience.

When the Reverend Henry Ward Beecher's seduction of Mrs. Elizabeth Tilton became public knowledge, Brooklyn's Plymouth Church tried to cover up their pastor's infidelity through a rigged investigation. By that time, 1871, Beecher, the offended husband, Theodore Tilton, and their mutual business partner, Henry Bowen, had been trying to reconcile for two years through secret meetings and written agreements. Their efforts came undone when the radical suffragette Victoria Woodhull, offended by Beecher's sisters, decided to let the world know that Henry Ward Beecher practiced the free love principles Victoria Woodhull was being vilified for advocating.

Others knew that in addition to Mrs. Tilton, Beecher had "ravished" Edna Dean Proctor, likely fathered Mrs. Chloe Beach's child Violet, and had other women slipping in and out of his church office. Still, Plymouth Church thought it could keep the lid on. Because Beecher had often been abetted in his infidelities by the injured parties, including the cuckolded husbands, the victims' stories appeared too outrageous to be credible. Since Mrs. Tilton confessed and retracted her confession of the affair multiple times, and Beecher always took care to phrase his admissions with a Clintonian nicety, proof of Beecher's affair with Mrs. Tilton, as well as his dalliances with others, remained circumstantial.

Debby Applegate presents her subject in the way his audiences and friends found him, as a figure of endless ...