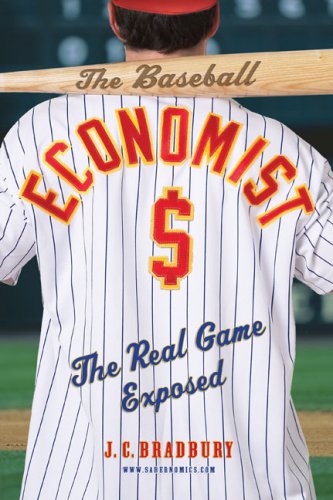 An economist's view of baseball.

Economists are not a timid lot. We like to take our game to other people's playgrounds and see if we can beat them. We think our game plan—building models based on the assumption that rational people are responding to incentives, crunching a lot of numbers, and ruthlessly sharpening our spikes—can be applied just about everywhere, so we're not afraid to take road trips. Many find this adventurous bent laudable, although occasionally over-eager economists take on competition that's pretty tough and the home crowd boos them off the field.

A recent article in the Wall Street Journal told of one such case. When Cornell economist Michael Waldman used statistical evidence to argue that autism is linked to television watching, autism experts and parents of autistic children roundly criticized him and tried to eject him from the ballpark. Or take the case of The Marketplace of Christianity, in which economists Robert B. Ekelund, Jr., Robert F. Hebert, and Robert D. Tollison mangled the religious history of Christianity from the Reformation to the present in a ham-fisted attempt to impose public choice theory and neoclassical economics on spiritual matters. There were a few valuable insights, but overall a lot more misses than hits. And of course there's the case of Steven D. Levitt, co-author of the surprise bestseller Freakonomics. He's made news by applying economic arguments and statistical evidence to topics ranging from test taking to naming babies and crime. His argument that the Roe v. Wade decision precipitated a substantial drop in the crime rate a couple decades later is far from what most people once considered to be economics. Serious questions have been raised about the validity of this finding, but the umpiring crew hasn't yet reached an official ruling.

And now we have economists sizing up sports. Though this may seem trivial to some, perhaps yet another sign of academic decline, the economics of sport is a booming business. My bet is that economists ...