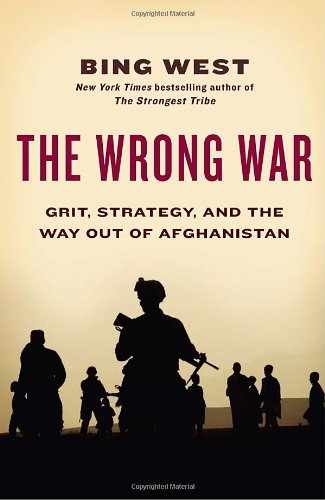 Few chroniclers of modern war possess the impressive bona fides of Bing West. He lived the life of a Marine infantryman in Vietnam and served as an assistant secretary of defense in the Reagan administration, so he has experienced the military world at the lowest and highest echelons, in peace and in war. Perhaps most impressive: he has during the past several years made numerous trips to war zones in order to report back to America. Two previous books, No True Glory and The Strongest Tribe, are firsthand accounts of combat in Iraq. His newest, The Wrong War: Grit, Strategy, and the Way Out of Afghanistan, is the result of extended periods of living with the troops there. As a man of seventy who has other options, West earns my admiration for his willingness to not only travel to some of the scariest places in the world, but to report on them from a grunt's-eye-view, foregoing electricity and running water, wading through canal muck, and dodging Taliban bullets.

The Wrong War describes the U.S. counterinsurgency fight in two crucial Afghan provinces. The book's first half takes us to the ruggedly mountainous Konar Province, where the documentary Restrepo was filmed. Its second spotlights the centerpiece of Gen. Stanley McChrystal's counterinsurgency plan, Helmand Province. Both sections point to West's central themes: the nobility and proficiency of the U.S. infantry in Afghanistan, and the tragedy that has nonetheless resulted due to vacillating and unwise direction from senior American leaders.

West's writing is at its best when focused on the first theme. His accounts of the subtitle's grit (the relentless courage of soldiers, as well as their dirty surroundings) are detail-rich, and he effectively paints a landscape of uncertainty, complexity, and violence. He hits a peak when recounting firefights, and his minute-by-minute recollections depict well the confusion, frustration, and horror of contemporary fighting in Afghanistan—and the startling pluck and professionalism of U.S. and allied foot soldiers. He gives his readers an uncensored look at war's profanities, both verbal and moral.

That by itself is a reason to recommend this book. As the economy diverts American concerns from the war in Afghanistan (except for how it affects the government budget deficit) and the U.S. presence gradually shrinks, the home front forgets that there are still plenty of soldiers living in squalor and mortal danger. Bing West does the nation a significant service, first by reminding us that there is a real war that continues to be fought in our name, and second by telling us about the frontlines most of us won't see, and the men who have chosen to fight there.

West's infantry experience quickly shows itself as a boon; it allows him to better understand the units and the tactics they employ. Unfortunately, it becomes a disadvantage, too. The so-called mainstream media are often bludgeoned in pro-military circles for focusing on the bad news while ignoring the positive stories that come out of Iraq and Afghanistan. No fear of that here. When he's writing about the platoon- and company-level grunts, there is no doubt that West feels more than a mere embedded journalist. He is a part of the family, and his task is to make sure their glory is recorded: "In harsh physical surroundings and challenged by a hardy foe, the American soldier displayed his warrior mien. He doesn't question orders or moan about his fate. It didn't make any difference that higher-ups had erred, or that no one in America knew where Barge Matal was, or that the enemy was attacking from all sides." After noticing outposts named for Vietnam-era Marines, West writes, "It felt odd to look at a map with the names of comrades from a war long past. Grunts remember their own. They want to be like those who went before them. Tradition, heritage, pride. You bet." It is beneficial to understand any writer's biases, and West makes little effort to deny his.

His camaraderie with the grunt (for West, a term of endearment) also makes him vulnerable to the charge of myopia. He has spent significant time with ground troops and, having shared weeks of patrolling and fighting, sees the world from their perspective. It's an invaluable perspective, and one that higher headquarters and senior commanders must work diligently to understand, for it is easy, but dangerous, to fall out of touch with those at the spear's tip. It is just as easy, however, for those at the lower echelons to complain about how the higher-ups "just don't get it." Many times, of course, that's true, but sometimes it's not. Commanders and staffs at higher echelons—battalion, brigade, division, and above—must try to make sense out of a mass of confusing, sometimes contradictory information, and give orders and allocate resources based on what they know. The smaller units often lack the entire context that gives rise to a higher echelon's game plan. In The Wrong War, West seems quick to criticize decisions made at the higher levels, without showing that he has adequately investigated the reasons they were made.

West's second theme is what he sees as mismanagement of the war in Afghanistan by top-level American leadership. He portrays U.S. directions to troops as vague and indecisive. When the guidance is decisive, it is in support of official counterinsurgency (COIN) doctrine, which emphasizes protecting the populace over killing the enemy. West is hard-nosed on this point: the military should be used for kinetic (i.e., violent) operations only, not nation-building. His best-developed reason for this point is that local Afghans happily take American money but routinely refuse to inform on insurgent activities. Moreover, the aid the military doles out creates an entitlement culture that stultifies the growth of a stable society.

The point seems well-substantiated, based on West's on-the-ground experiences. It does differ, however, from the perspective of a number of COIN experts, who hold that the military must expand to roles involving economics, governance, and culture. I wonder if West's sample size is too small with respect to his large claims about COIN. I know a couple of minor players from the book personally, and talked with one at length about his experiences in Konar Province. Although he did not directly disagree with West on any particular point, he told me the results he reaped from non-kinetic efforts far outstripped what he accomplished kinetically. By emphasizing humanitarian aid, partnership with Afghan security forces, and a rapport with and commitment to the locals, his platoon found significant gains. When they arrived in the locality, they were viewed with suspicion and found themselves targets of attacks. Six months later, villagers were calling his command post with information on hidden mines. In one amazing instance, Afghan civilians found and cordoned off a roadside bomb, safeguarding it until security forces arrived. Far from the fence-sitting that West reports, contemporaneous COIN efforts in a neighboring section of Konar Province apparently yielded measurable success. (I understand that this, too, is an extremely small sample size, but it does cast doubt on whether West's experience with COIN was universal.)

West concludes his book with a too-sweeping critique of current high-level U.S. policy in Afghanistan, followed by an even sketchier solution. Despite their lack of detail, West's criticisms of the war's strategic level reveal significant questions about it. "The United States invaded Afghanistan in order to destroy the al Qaeda network," he writes. Tellingly, the paragraphs following, which serve to sum up the current state of affairs, say nothing about al Qaeda. Instead, they focus on the Taliban as the enemy. This shift exemplifies the difficulty of responding to transnational terrorism. Should the goal be to eradicate the terrorist organization? Political difficulties arise with this goal, since such groups can be found in a number of sovereign countries. Should it be to make the harboring country a place inhospitable to terrorists? This seems to be the U.S. course today, but it is one rife with challenges. Too, it seems to require that a government, including security forces, economy, and infrastructure, be erected before the U.S. can reduce the substantial troop presence required to make a terrorist haven inhospitable in the first place.

Bing West refrains from dwelling on these questions in The Wrong War. But they are only part of the set that Christians will be asking themselves by the end of his report. How to respond to terrorism in a way that God approves of will continue to be debated. In the meantime, West's book shows us that the fundamental nature of war, which reveals man at his most noble and most horrific, refuses to change.

Michael W. Brough is a lieutenant colonel in the US Army and is currently deployed with the First Cavalry Division as a combat advisor to the Iraqi Security Forces. An Iraq war veteran, he is an editor of Rethinking the Just War Tradition (SUNY Press). The views expressed here are those of the author and do not reflect the official policy or position of the U.S. Department of the Army, the U.S. Department of Defense, or the U.S. government.