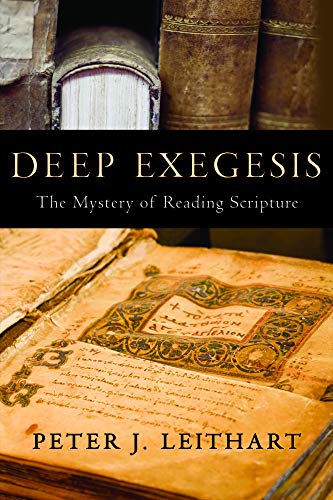 Loving the Letter of the Text

A scholar friend of mine likes to recount an exchange he once had with a prominent systematic theologian. In a lecture, the theologian had argued vigorously for the reintegration of the discipline of biblical studies with the related but distinct discipline of constructive, confessional Christian theology, in defiance of modernity's sundering of the two. Afterward, my friend approached the lecturer. Who, he asked, are some exemplary practitioners of the integration you're proposing? Where are the models we might emulate? Aquinas, Calvin, and Barth, came the reply. Frustrated, my friend walked away wondering, Have we learned nothing about biblical studies and theology since the era of Barth? Who are the bridge-builders now?

While the reader ponders my friend's question, let me nominate Peter Leithart as one such exemplar. Trained in systematic theology at Cambridge under the supervision of John Milbank and now taken to writing biblical exegesis of a high order, Leithart has been cross-pollinating the fields of ostensibly separate Christian academic disciplines for some time now. (His commentary on 1-2 Kings for the Brazos Theological Commentary on the Bible series is, in my judgment, not only one of the finest in that series to date but also one of the best theological commentaries on an Old Testament text that I have yet encountered.)

In his latest book, Deep Exegesis: The Mystery of Reading Scripture, Leithart for the first time steps back to self-consciously reflect at some length on his craft and to offer counsel for those wishing to cultivate it themselves. The book's central thesis is a simple one: Taking cues from the way Jesus and Paul read the Old Testament, interpreters today ought to pay attention to the letter of the text—its particular form, the way the words go—and not only the supposed matter underneath that form, its "spirit" or "content." Or, rather, "attending to the specific contours of the text—the author's word choices, structural organization, tropes and allusions, and intertextual quotations"—just is the way to engage the "spirit" of the text. If you like, paraphrasing Derrida, there is no spirit outside the letter.

For Leithart, the history of modern hermeneutics presents, for all its superficial diversity, a unified front when it comes to engaging with Scripture's specific forms. Interpreters of every stripe seem to agree: Those forms are (in one way or another) dispensable, a husk that can be marginalized or discarded once the kernel of truth has been grasped and removed. Thus, for instance, Immanuel Kant could accord Scripture a certain respect, but only after he had made clear that its timeless message was to be extracted from its problematic trappings. "His hermeneutics," Leithart claims, "is a form of moral allegory, as Kant moves from the narrative and poetry of the Bible to rational, philosophical accounts of the realities in question," discounting the truthfulness of the former and privileging the latter.

Leithart detects the same allegorizing impulse in some unlikely places. In a vein not too dissimilar to Kantian interpretative schemes, contemporary evangelical believers may do their part in maintaining a tacit opposition between Scripture's particular media and its underlying message. "[W]e are impatient with texts," Leithart opines:

A writer lingers, and we want to grab him by the throat and say, "Get to the point, man!" Evangelicals would reverently refrain from throttling an apostle, but the demand for practical Bible teaching often has this threatening subtext. "Don't give me all these names, lists, genealogies, stories. Tell me what to do. Tell me about Jesus."

Deep Exegesis is a sustained, often playful, and sometimes brilliantly provocative attempt to undo the dichotomy between the Scripture's formal husk and its material kernel. Leithart's aim is to rehabilitate "a hermeneutics of the letter," to encourage "devoted attention to the husk."

When discussing typology—the effort to read Old Testament characters, occurrences, and symbols as figural anticipations of New Testament ones—Leithart proposes that "texts are events." Just as some events change in the course of time—consider a shooting that happens at 10:00 am; was it actually an assassination before 1:00 pm, when the victim finally died in the hospital?—so Old Testament texts expand and take on new hues in light of further divine disclosure in the New Testament. Where disciples of Kant might see a timeless truth concealed beneath untenable typological garb, Leithart sees a message inextricable from its historical unfolding.

Biblical texts are not only events but also jokes. Like stories that depend for their punch on a listener's ear for what's left unsaid, texts disclose their depths to those with a sense of humor: "An exegete pores over a text, and finally, and often suddenly, a dozen pieces fall into place …. The exegete might actually laugh: 'Now I get it,' he would say."

Events. Jokes. Also music: Like a symphony or concerto that returns to a motif, adding variations each time, texts are music, evincing structure, rhythm, and harmony: "Textual meaning, like musical meaning, arises not only from the words, phrases, sentences, and paragraphs—episodes taken in isolation—but also from the arrangement of words, phrases, sentences, and paragraphs." Furthermore, as music demands that we "take time," following note with note, producing a good reading of a text requires patience, not simply because learning is a long process but because inherent in the act of reading is a sequential movement prompted and constrained by the text's own configuration.

Leithart's book everywhere displays his sheer delight in the pleasures of reading. He ranges freely from learned discussion of biblical and theological material to sources as diverse as Dante, Jane Austen, and Christopher Nolan's film The Dark Knight, all the while pressing us to take seriously Scripture's strange, often bewilderingly alien forms as the necessary means of engaging its message. (At times his illustrations and analogies are startlingly fresh. For instance, at one point in his comparison of texts to music, he says: "[Music] trains us in waiting for the climax, waiting for beauty to build and build. It trains us not to seize. Music trains us in good sex, sex that takes time." A theological interpreter who cares as much about making these sorts of connections as Leithart evidently does is, I submit, ipso facto worth reading.)

But what of the book's central thesis? What should we make of the claim that theology and exegesis have too easily dispensed with the Bible's husk in their hunger for the kernel? Leithart's insistence on adhering to the biblical forms, not just the matter, is salutary in a culture such as ours, impatient as we are with most things that demand sustained attention. But that insistence also raises troubling questions. What about the arguments made by orthodox believers, and not only hermeneutical revisionists, that the Bible's essential truths may—indeed, at times, must—be communicated in forms that differ from the Bible's own? The Nicene Creed's declaration that the Son is of one substance (homoousios) with the Father is a good distance from the Bible's way of speaking of intertrinitarian relations. And yet the Creed is—so orthodox Christians confess—a faithful rendition of the Bible's judgment that the Son is indeed divine.[1]

In the eras of the church's defining Christological debates, it was not enough for the orthodox merely to attend to the Bible's words, phrases, sentences, and paragraphs, since the meaning of those biblical forms was precisely what was up for grabs. Simplifying the matter drastically, we might say that two opposing kernels (Nicene orthodoxy and Arian Christology) were claiming identical husks (the shared language of Scripture). Arguably, the triumph of orthodoxy depended on being able to grasp the right kernel (the Bible's message about the identity of Jesus) and fit it within a new, extra-biblical husk (the language of ousia). Ironically, given Leithart's argument, it was the biblical kernel itself that pressured its defenders to set aside the biblical husk for a moment and cast about for a new one.

It is, of course, a measure of the importance of Leithart's study that it raises questions like these, and more besides. Deep Exegesis is a treasure trove of hermeneutical reflection by a master craftsman. It will repay careful rereading, by scholars as well as students. As for my scholar friend who continues his search for thoughtful, creative exegetes working for a renewed theological interpretation of Scripture amid the wreckage of late modernity, I mentioned Leithart to him last week over coffee. We would do well to learn from his reflections, I said, and then, take up the text—husk, kernel, and all—for ourselves, and read.

1. I draw here on David Yeago's brilliant essay "The New Testament and Nicene Dogma: A Contribution to the Recovery of Theological Exegesis," Pro Ecclesia, Vol. 3 (1994), pp. 152-64, and on personal conversations with R. Michael Allen.