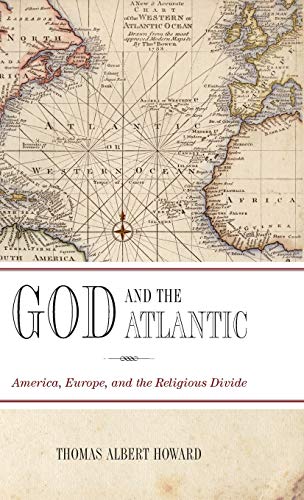 During a semester abroad in Mainz, Germany, in the mid-1990s, I sampled lectures on the New Testament from the university's Evangelisch-Theologische Fakultät. Fifteen years later, I can only remember two things the professor said in the course of the semester. First, when discussing a gospel account of a healing, he commented that "only some people in America" believed that such miracles actually occurred. Later on, he observed that when American theologians—he at least conceded that such rarities existed—happened upon an idea, they did so unaware that German theologians had fully vetted it several decades earlier. He might have added that few American Christians wanted their ministers to stumble upon any recent theological insights, from Germany or anywhere else. Die Amerikaner: superstitious, backward, ignorant.

In God and the Atlantic, Thomas Albert Howard analyzes the venerable history of European criticism and derision of American religion. "[Woodrow] Wilson talks like Jesus Christ and acts like Lloyd George," French President Georges Clemenceau complained at the 1919 Paris Peace Conference. No one accused George W. Bush of speaking like Jesus, but European dissatisfaction with his purportedly evangelical administration produced fresh discussions of a longstanding "transatlantic religious gap" between a religious United States and a secularized Western Europe.

The many sneering dismissals of America and American religion that Howard includes in God and the Atlantic are themselves worth the price of admission. They range across the span of U.S. history, from the French diplomat Charles de Talleyrand's assessment of the early Republic ("The states of America are a country where there are thirty-two religions, but there is only one course at dinner—and it's bad") to the pithy judgment of postmodern critic Jean Baudrillard ("the only remaining primitive society"), none of them surpassing the loathing expressed by the philosopher Martin Heidegger ("[the] metaphysical essence of the emerging monstrousness of modern times"), who found Nazi ideology more congenial.

Howard's foremost contribution is to historicize and categorize European animosity against American religion, dividing it first into traditionalist and secularist camps. Unapologetic for his focus on élite thinkers, Howard follows Charles Taylor in exploring a "social imaginary" largely created by intellectuals that filtered down to other strata of society. What emerges is first and foremost a sweeping and engaging intellectual history of Europe during the ages of revolution and reaction. While many European thinkers found backwoods revivalists, Shakers, Millerites, and Mormons inherently fascinating, their comments about the United States primarily interpreted events closer to home. Thus, traditionalists pining for the ancien régime regarded the American experiment in democracy with great suspicion and accordingly concluded that religious freedom undermined order and morality. More secular reformers and revolutionaries, meanwhile, saw the primitive vitality of American religion as a stumbling block to either a Comtean "religion of humanity" or the coming socialist state. Many Europeans on the Left absorbed a bitter anticlericalism through the heritage of the French Revolution.

Howard suggests that these rival tendencies of European thought occupied some common ground in their view of the United States. Both traditionalists and secularists argued that American society lacked conditions they regarded as normative but that Howard argues were merely specifically European. In short, America was anomalous or defective, lacking a feudal past and now locked into a bourgeois pursuit of material wealth. Also, many Europeans of all political stripes regarded the United States "at once as poor learner, oafish foil, and didactic counterexample."

When encountering a book both far-ranging and brief, one cannot help but quibble on occasion. While Howard typically provides succinct introductions to the life and thought of key figures such as Frances Trollope and Karl Marx, similar material on intellectuals less familiar to non-specialists would assist such readers. More substantively, Howard comments at the outset that Great Britain presents a "special case," given the religious "patrimony" of the United States, yet after an early section on 19th-century British traditionalists (mostly Anglicans), he only rarely returns to this special relationship.

Howard does not waste much time assessing wild European claims about American religion. After all, Europeans once asserted that New World dogs failed to bark and that Americans were degenerating into a race of sterile midgets. A 19th-century Catholic encyclopedia reported the existence of a literalistic American sect which allegedly required its adherents to pluck out their right eyes in fidelity to Matthew 5:29. Many critics of New World religion never crossed the Atlantic; many others happily misused the actions of small minorities as representative examples. Still, a good number of critics hit the mark. Anglican minister Isaac Fidler, who did visit the United States, observed that a minister's dependence on his congregants' good will and money created a great temptation to discard erudition and to compromise with local standards and tastes. Indeed, both traditionalists and secularists criticized American Christians—and Americans in general—for ignoring the life of the mind. While critics have always overstated this case, even sympathetic interpreters like Alexis de Tocqueville emphasized the American preference for practical knowledge.

Of course, it still speaks ill of many cultured European despisers of American religion that they made so few attempts to acquire more than a superficial acquaintance with the object of their scorn. Thus, Howard spends the latter portion of his book introducing more knowledgeable and sympathetic voices into the dialogue. Because "one cannot live by Tocqueville alone," Howard eschews the French aristocrat in favor of two somewhat less familiar interpreters of American Christianity.

At first glance, Reformed church historian Philip Schaff and Catholic philosopher Jacques Maritain have little in common, separated both by time and ecclesiastical boundaries. Both men, however, spent many years in America while maintaining close connections with continental intellectuals, and they both concluded that Europe had much to learn from its New World child's voluntaristic approach to religion. Schaff, who spent the bulk of his career at Mercersburg and Union seminaries, deplored America's rampant sectarianism but predicted a future marked by "free unity in spirit and truth" that would transcend but not obliterate confessional differences.

For most of Maritain's adult life, he spoke and published in the shadow of fin-de-siècle Vatican condemnations of "Americanism." Thus, his praise of American democracy and religious pluralism took considerable courage. Howard briefly explores Maritain's Thomistic emphasis on the imago Dei, focusing on his articulation of a humanism shorn of its anti-religious bias. In Howard's paraphrase, Maritain's "new Christendom" grounded the liberal state on "a common, supranational insistence on the freedom and dignity of the person qua person." When Maritain left France in 1940 and took refuge in the United States, he found to his surprise that America realized his ideals in part. America, he suggested hopefully, displayed religious freedom without either anticlericalism or "antinomian perversion." He admired the voluntaristic energy and dynamism of American Christianity, which still supported a benevolent empire of sorts without state control. And as Schaff had also done, Maritain praised middle-class American thrift and industry in contrast to a bourgeois thirst for aristocratic leisure.

Howard makes plain his appreciation of "mediating figures" such as Schaff and Maritain. He rejects secularization as a normative description of or prescription for the modern world, and he presumably would echo the balanced assessment of the American religious scene that his exemplars epitomize. Indeed, his book suggests that if Americans and Europeans alike were more familiar with their divergent histories, they would find the transatlantic religious divide less of a cause for mutual animus, derision, and contention. Making use of Ralph McInerny's study of Jacques Maritain, God and the Atlantic implies that both Europeans and Americans should make a much deeper effort to discern the "lurking positive" in each other's approach to religion and society. For believers and secularists on both sides of the Atlantic, that would be a worthy leap of faith.

John G. Turner teaches modern American history at the University of South Alabama. He is the author of Bill Bright and Campus Crusade: The Renewal of Evangelicalism in Postwar America (Univ. of North Carolina Press). Currently he's studying 19th-century Mormonism.