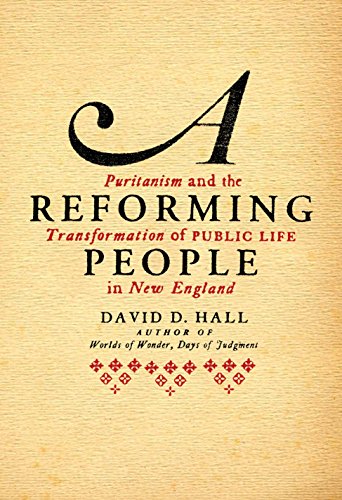 American politics is a ruin today. We suffer an economic crisis that widens the rift between rich and poor. Rather than pursue genuine reform, civic leaders resort to words such as "liberty" and "rights" to protect selfish interests. Where can we find a historical example of a social policy that resists such corruption, that promotes equity or fairness without legitimating authoritarian regimes? Perhaps, David Hall suggests in his latest book, we should take another look at the Puritan founders of New England.

Hall's stunning suggestion cuts against the grain of long-standing and still prevalent opinions about the Puritans. These 17th-century reformers left a voluminous record that has evoked lavish praise and severe censure. Hall argues that many of their admirers, including historians of evangelicalism, have misidentified them with modern notions of democracy that valorize individual rights. In the 19th century, writers such as Alexis de Tocqueville and the great American historian George Bancroft idealized the founders of Massachusetts as hardy individualists and proto-democrats. Such readings, by Hall's account, ironically echo Anglican opponents who warned Crown and Parliament that the Puritans favored a radical polity that promoted democratic sedition and anarchy.

Hall is quite critical of the opposite position as well: that the Puritans instituted a theocratic and profoundly undemocratic regime. Here again we have modern observers, including early 19th-century Unitarians, writers such as Nathaniel Hawthorne, and later literary critics who oddly replicated 17th-century complaints that the Puritan ministry had turned the colonies into an inhospitable oligarchy of the saints. This image of fanatic authoritarianism persists. So, as any teacher of the period knows, most students who read the Puritans fasten on tales of power abused: persecution of women such as Ann Hutchinson, execution of witches, banishment of Quakers, and warfare against Indians. As Hall laments, ...