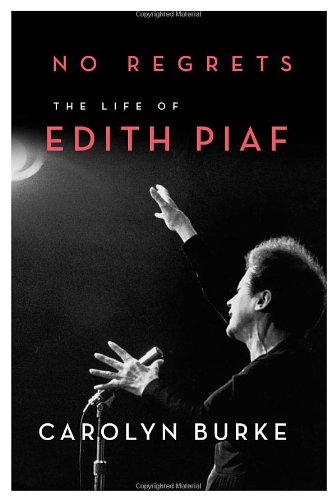 The life and art of Edith Piaf.

When I tell my friends that I'm a fan of Edith Piaf, I often get a blank look, or a smile, or a comment that they prefer it without celery. So I remind them of the movie Inception (which they've usually seen, the number of viewings rising in proportion to their geekiness), and the parts where Leonardo DiCaprio wakes from chemical dreams to the brassy thrum of a French voice singing, Non, rien de rien, non je ne regrette rien. That's Edith Piaf, I say, and DiCaprio's dead wife is played by Marion Cotillard, who won an Academy Award for her portrayal of Piaf in the 2007 film La Vie en Rose (known in France as La Mome). And, yes, at this point the geek shoe is definitely on the other foot, but good movies will do that to you; films have a way of turning casual interests into full-blown obsessions, even more so when a subject comes with its own gut-wrenching soundtrack.

In my favorite scene from La Mome, little Edith Gassion wanders blind and bandaged through the halls of her grandmother's Paris brothel, past the ragged filles de joie (the French call their prostitutes "daughters of joy"), past the leering clients. Il ne se passe jamais rien pour moi (Nothing ever happens to me), sings Edith's adult self, the woman who has already risen from the slums to become la Mome Piaf (the little sparrow), an international celebrity and icon of French culture. But the viewer knows, watching this tiny girl stumble through the dark, that pretty much everything will happen to Edith, if has hasn't already, and that out of the gloomy rooms of a Belleville brothel will come some of the great French songs of the 20th century.

Even without soundtracks, though, books can achieve things that films can't—a greater measure of historical accuracy, for instance, though often at the cost of a good story. Carolyn Burke's new biography of Piaf, No Regrets, tells the tale well, but it also expands and corrects much of the dramatic content in La Vie en Rose. The author's genuine passion for her ...