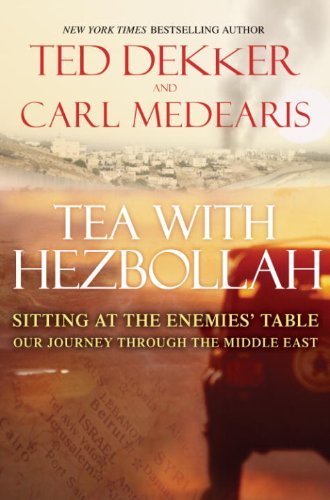 Hezbollah is in the news again, and not in a particularly savory way. Isn't this reason enough to dismiss out of hand a book called Tea with Hezbollah: Sitting at the Enemies' Table, Our Journey through the Middle East? Surely this is culpable naïvetè? Not necessarily.

But the challenge of refraining in thought, word, and deed from fury, lust, and duplicity is less daunting than this: "You have heard that it was said, 'You shall love your neighbor and hate your enemy.' But I say to you, Love your enemies and pray for those who persecute you, so that you may be children of your Father in heaven" (5:43-45, NRSV). When an attendee at a Harvard Bookstore forum asked Sebastian Junger, the bestselling author of The Perfect Storm (1997) and War (2010), about loving one's enemies in wartime, Junger replied, "It's a beautiful idea. I don't think it's realistic, unfortunately. If that worked, there wouldn't be war, but it doesn't work." For Junger, Afghan insurgents and U.S. soldiers cannot love one another. They must kill or be killed.

Although Ted Dekker and Carl Medearis are not soldiers, they challenge Junger's verdict by setting out to love enemies and pray for perceived and actual persecutors. In Tea with Hezbollah, Dekker and Medearis recount their trek through Egypt, Saudi Arabia, Syria, Lebanon, Jordan, Israel and the Palestinian territories to eat, drink, interview, and converse in Jesus' name with Muslim ideologues, Hamas leaders, Hezbollah fighters, the Saudi Arabian Minister of Oil, two of Osama bin Laden's brothers, Lebanese Sheikh Ayatollah Fadlallah (deceased July 4, 2010), and workaday Muslim taxi drivers, teachers, river ferriers, entrepreneurs, and military officers. They brave border patrols, body guards, the IDF, and Saudi religious police to humanize powerful and everyday Middle Eastern Muslims to Americans, and to humanize Americans—especially American evangelical Christians—to Middle Eastern Muslims. One of the ways they do this is by peppering their interviewees with questions ranging from the lighthearted to the audacious:

What is something your children or grandchildren do that makes you laugh?
What are your favorite hobbies, television shows, or sports?
What would you say are Americans' greatest misconceptions of your people?
What are the worst Muslim, Arab, and Saudi misconceptions about Americans?
If you had one thing to say to all Jews and Christians, what would it be?
Jesus' greatest teaching was that we love our neighbors as we love ourselves, even love our enemies. How do you recommend we love each other as Jesus taught?
If you fire a rocket at your neighbor,is that loving them?

But Tea with Hezbollah does not merely moralize that Muslims and even terrorists are people too. Dekker and Medearis aim for reconciliation in a "more excellent way" (1 Corinthians 12-13) by emulating Booker T. Washington (let no one pull you so low as to hate them) and Martin Luther King, Jr., "to see the enemy's point of view, to hear his questions, to know his assessment of ourselves. For from this view we may indeed see the basic weaknesses of our own condition, and if we are mature, we may learn and grow and profit."

Dekker and Medearis labor to win their enemies' friendship, understanding, and acknowledgement of what is right by initiating conversations about Jesus with Muslims who traditionally revere Jesus as a prophet, virgin-born Messiah, and as a "Word" from God in language reminiscent of John 1 (see Surah 3:45, 4:171). But even though Muslims respect Jesus, they are usually woefully ignorant about the gospels, not least because of misguided or malicious efforts to ban Bibles in parts of the majority Muslim world. Such censorship continues despite commands in the Qur'an that apparently allude, appeal to, or purport to confirm Jewish and Christian scripture, "If thou (Muhammad) art in doubt concerning that which We reveal unto thee, then question those who read the Scripture (that was) before thee" (Surah 10:94).

Samir Kreidie, president of the Lebanese community in Saudi Arabia, insists, "Jesus is not only for the Christian but for the whole world" (Tea with Hezbollah, p. 39). In The Call of the Minaret, Anglican Bishop and scholar of Islam Kenneth Cragg concurs. "Is the Sermon on the Mount to be left in silence in the Muslim's world? Must the story of the Good Samaritan never be told there?" In light of Kreidie and Cragg, Dekker and Medearis retell the Parable of the Good Samaritan in Tea with Hezbollah for a contemporary multi-faith setting, with a twist that I will not reveal here except to commend it for its creativity and insight. I don't want to spoil their future readers' sense of discovery.

Although rarely recognized as such, the story of the Good Samaritan may be Jesus' clearest exposition regarding interaction between adherents of different religions. Samaritans for Jesus' Jewish audience were not just ethnically distinct, they represented corrupt religion and bad theology (cf. Luke 9 and 17; John 4 and 8). The Zondervan NIV Study Bible notes, "the person Jesus commended was neither the religious leader nor the lay associate, but a hated foreigner. Jews viewed Samaritans as half-breeds, both physically and spiritually. Samaritans and Jews practiced open hostility, but Jesus asserted that love knows no … boundaries." That the heretical Samaritan gets doctrine wrong but ethics right makes his role as hero all the more shocking to Jesus' hearers.

When I share the Good Samaritan with college and university students, I ask who Jesus would designate as the wounded victim, the Priest, the Levite, and the Samaritan if he were speaking to early 21st-century audiences. To American evangelicals, might Jesus say, "A pastor and a senator passed by a wounded American Christian, but a Pakistani cleric was moved with pity for the man." Or, addressing Muslims, would Jesus say, "a mufti and an imam passed by the wounded Muslim on the other side, while an American marine took pity?"

With significant exceptions, Muslims do not generally believe Jesus was crucified, nor subsequently raised from the dead. Many Muslims are unaware the gospels record these events, or they may believe God wouldn't permit a true prophet to experience humiliation and death at the hands of sinners. So, they give credence to folklore, sometimes based on Surah 4:157 in the Qur'an, that God placed Judas, an angel, or someone else on the cross in Jesus' place, while God took Jesus straight to Paradise.

One consequence of Dekker and Medearis's Tea with Hezbollah is that in loving, praying for, and discussing Jesus' teachings with Muslim enemies and friends, they reflect the wisdom and glory of Jesus who "humbled himself, and became obedient to the point of death— even death on a cross" (Philippians 2:8, NRSV). But Jesus' humiliation did not result in defeat. It was a necessary step in conquering sin and death, followed by God's vindication: "Therefore, God highly exalted him, and gave him the name that is above every name" (Philippians 2:9).

In reviewing Dekker and Medearis, it may be helpful to anticipate several objections. First, skeptics may sneer at risking death, deportation, and imprisonment to simply "talk about Jesus," not to mention making bold or even lighthearted inquiries to enemies of the state. But to dismiss Dekker and Medearis as foolish fortune-hunters is to overlook the fruits of their adventuring. Their narrative reveals poignant and commonplace concerns held by Middle Easterners that are akin to Jewish, Christian, and secular American joys and fears. Tea with Hezbollah deserves applause if it succeeds in humanizing "the other" for Americans and Middle Easterners. When Jesus was maligned for eating and drinking with dangerous and disreputable people, he countered, "It is not the healthy who need a doctor, but the sick" (Matthew 9:12). If "greater love has no one than this, to lay down one's life for one's friends" (John 15:13), is not risking one's life so that enemies might become friends, also an act of love?

A second objection is that talking to terrorists or to other persons we deem dubious may be perceived as supporting their agenda and exhibiting weakness. But Dekker and Medearis are neither partisan nor sycophantic. Effective peacemaking is courageous and can be costly because it confronts the sin within us and sin within our ostensible opponents at sin's malevolent core. In so doing, peacemakers continue the work of Jesus, the "Prince of Peace" (Isaiah 9:6) who said, "Blessed are the peacemakers, for they will be called sons of God" (Matthew 5:9).

We may fear, suspect, or worse desire that some people are in fact beyond God's reach. But this is the attitude of the Levite and Priest, not the Good Samaritan, and certainly not Jesus. Martin Luther King, Jr,. observed, "it is difficult to like some people." You can't like someone bombing your home or a congressman trying to defeat civil rights. "But Jesus says love them, and love is greater than like" (cf. Luke 6:32).

Bob Roberts, the pastor of Northwood Church in Texas, and a friend of Dekker and Medearis, writes in his book Real-Time Connections: Linking Your Job with God's Global Work, "Christianity began as a Jewish movement to Christ, but I believe it will end as an Islamic movement to Jesus." I pray God continues to call workers like Dekker and Medearis to this harvest (Matthew 9:35-38), and to enjoy similarly flavorful cups of tea.

Benjamin B. DeVan has taught religion, philosophy, and African American literature at North Carolina Central University, Peace College, and a January term mini-course at MIT titled, "Religion: Bringing the World Together, or Tearing the World Apart?" He completed his MA in Counseling at Asbury Theological Seminary, his MDiv at Duke University, a ThM at Harvard in World Religions with a thesis on evangelical Christians and Islam, and is now a doctoral candidate at Durham University, UK, writing a dissertation on the New Atheism.