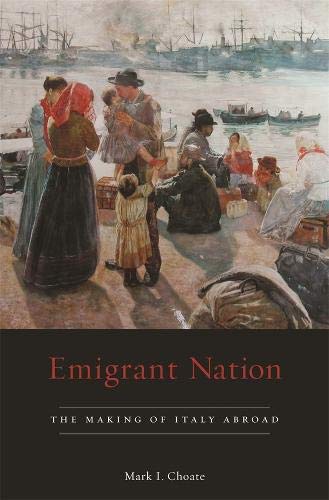 Students who were planning to take the Italian Advanced Placement Exam last year got some bad news: the College Board dropped Italian after 2009. With only 1,930 test takers in 2008, student interest was weak. But the coup de grâce came from across the Atlantic. Italy had pitched in $300,000 a few years earlier, and a fresh contribution apparently could have saved the program. But this time Italy decided to pass. Fortunately, after a one-year hiatus, the longstanding commitment was renewed, and the Italian AP exam will be back in action in 2011.

Readers of Mark Choate's splendid book Emigrant Nation will be able to understand how Italy came to finance an American placement exam in the first place, long after the historic waves of emigration to the United States. Who would even think to ask the Italian government to pony up funds? (Answer, for those who can't wait: anyone who is familiar with Italy's relationship with its emigrants over the past century.)

Italian emigration across the Atlantic—principally to the United States and Argentina—dates back to the decades after Italy became a unified country in 1871. In the beginning, Argentina was the destination of choice, but emigration to the United States surged at the end of the century. From 1891-1900, 651,893 Italians came to America, and the number leapt to 2,135,877 the following decade before dropping precipitously after World War I. Economic factors were the most obvious reason for much of the migration. Thousands of Italians found themselves on small farms as a result of the redistribution of church property after reunification. Population growth and competition from cheaper sources of grain like the United States and Russia made it increasingly difficult to scratch out a livelihood, which pushed many to consider relocating.

The revolution in transportation—the very development that put pressure on small Italian farms by lowering the cost of importing grain—also made it easier to migrate than ever before. Between 1861 and the end the century, the rail network increased tenfold, from 1,623 to 16,053 kilometers; a new link to a ferry between Sicily and the mainland provided further integration. Changes in the ocean crossing were equally dramatic. Prior to this era, sailing ships took between five weeks and two months to cross to New York City from Naples. By the turn of the century, when steamships were used, the crossing took ten to twelve days. The trip was more predictable, slightly cheaper, and—most important—living in the fetid, packed, unhealthy bowels of a ship was appreciably less perilous for ten days than for a two-month journey.

As with Mexico today, Italian officials never seriously interfered with emigration; it was an essential safety valve for the pent-up pressures caused by declining economic opportunity. But their enthusiasm ran hot and cold, and their stock narratives about the meaning of the exodus shifted. From the end of the 19th century until shortly before World War I, Italy treated its emigrants as emissaries of Italian life and culture, encouraging the formation of patriotic societies abroad and claiming their successes as successes for Italy. The Italian hero of A Merchant Prince, a popular, propagandistic 1899 novel by Luigi Einaudi, was an inspiring role model for this vision. By building a thriving network of textile factories, and rising to a position of social prominence in Brazil and Argentina, he lifts high the name of Italy. In the 1910s, Italy adopted a more colonialist stance, characterizing Italian communities abroad as outposts of Italian empire. New York, in this period, briefly became Nuova Jork in the official literature.

The Dante Alighieri Society, a key vehicle for these efforts, had a double task. Founded in 1889, the Society promoted Italian emigrants' identification with their homeland. But because Italy's liberal governments were constantly plagued by doubts as to whether Italy really was a single, coherent nation, the Society also had to persuade local Italians of their common bonds. To counter the profusion of dialects, one of the major obstacles to unity, the Society insisted that all Italians should master standard Italian, "the language of Dante." "The aim was not to speak Italian well," Choate writes, "but to speak well of Italy. Language could be the lynchpin of informal empire."

For much of the 20th century, Italy's stance toward its citizens' migration to America and elsewhere figured very little, if at all, in the American scholarly literature. Immigration history centered exclusively on questions of assimilation: how and when did Irish or German or Chinese—or Italian—immigrants become fully American? The classic in this genre was Oscar Handlin's book The Uprooted, which won the Pulitzer Prize for 1951. "These scholars," as one historian puts it, "saw uprooted and socially disorganized immigrants who were shunted from place to place by the impersonal push and pull of demographic conditions. Once immigrants arrived in the United States, according to these historians, they inevitably progressed toward complete assimilation in the dominant host culture."[1]