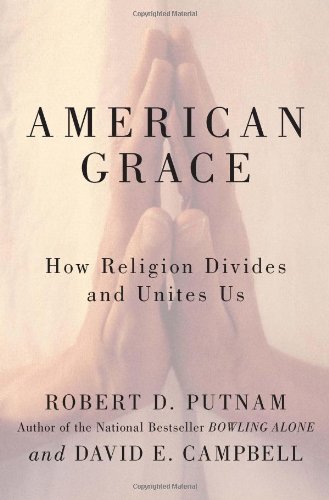 Why We Get Along

Religion and public life in the U.S.

Americans are seriously religious, but religiously diverse. So why don't we fight more about religion? In American Grace, Robert Putnam and David Campbell offer some tentative answers. While many of their conclusions will be familiar to scholars, seldom have so many insights been assembled in a single package, making American Grace an academic tour de force. The authors cover the vast landscape of American religion in a graceful, comprehensive, and meaty narrative.

The volume's length is justified by the range and importance of the findings. The authors intersperse chapters full of abstract theory and data analysis with extensive vignettes describing religious life in numerous congregations. These include Episcopal parishes in Massachusetts, megachurches in California and Minnesota, a transitional (Anglo to Latino) Catholic parish in Illinois, a black Protestant church in Maryland, a Missouri Synod Lutheran congregation in Texas, a Reform Jewish synagogue in the Chicago area, and a Latter-day Saint ward in Utah. While serving to introduce major topics, the vignettes are of great interest in their own right.

The contributions of American Grace are too numerous for a full recounting, but we can highlight a few. The authors first delineate the course of religious change in the late 20th century, from the high tide of "civic religion" in the 1950s to the "shock" of the 1960s counterculture, which challenged traditional morality and loosened many Americans from their religious moorings. This trauma was followed by the "first aftershock" of revived religious conservatism in the 1970s and '80s, producing a "second aftershock," the abandonment of religion by many young people, turned off by the Christian Right. The authors' explanations may not convince everyone (we doubt the theory that "the Christian Right did it"), but they draw on an immense body of data to support their interpretations.