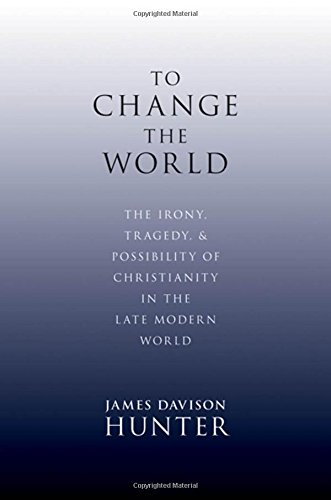 To Change the World: The Irony, Tragedy, and Possibility of Christianity in the Late Modern World
James Davison Hunter
Oxford University Press, 2010
368 pp., 34.95

How Not to Change the World

A call to "faithful presence."

Taken as a whole, these three essays are persuasive and compelling. There are certainly questions worth asking, especially about some of the stark claims early on. Many have observed that being culturally élite ain't what it used to be—élites themselves evince a level of anxiety about their own influence and staying power that is worlds away from the serene dominance of the establishment even one generation ago. No less commanding an élite insurgent than Barack Obama is living proof of just how hard it is to get things done in a world of fragmented and distributed power. We could observe that much creativity, especially in market economies and democratic polities, comes from peripheral locations, as in the pharmaceutical industry's striking reliance on startup companies or the astonishing salience, at least at crucial moments, of outsider movements from Ross Perot to the Tea Partiers.

A more practical question is what evangelicals might have done in the last century instead of retreating to the margins. A subcultural strategy can sometimes be wise—if nothing else, it preserves an identity distinct from the dominant culture. I spent some of my formative years among mainline Protestants for whom "faithful presence" was the very watchword, but in practice that meant nearly complete cultural accommodation. This is perhaps the greatest practical obstacle to enacting Hunter's vision. Creating a strong alternative community to counter the dominant culture, while still boldly commissioning that community's members for presence even in places of great cultural power, has proven quite the sticky wicket for two millennia now. (American Jews, whom Hunter cites as an example of a culturally central minority, could equally be an example of just how much assimilation such influence requires.)

To be sure, the parallel structures of evangelicalism have often collapsed into stifling subcultural hothouses. But that does not mean they have not played a formative role, and a culturally significant one. Hunter has little to say, none of it very complimentary, about Christian colleges like Gordon, yet that is the alma mater of two notable sociologists of our time: Christian Smith and, yes, James Davison Hunter. Hunter allows that Christians have a significant, influential presence in the fields of philosophy and American history, but he does not mention that many scholars who were the vanguard of that presence began their careers at "underfunded," "peripheral" evangelical colleges. If Hunter wants to bite the subcultural hand that fed him, he is not the first nor will he be the last; but speaking as an outsider to evangelical education who has spent my whole life, from birth to the present, in the midst of the secular academic world, I have been pleasantly surprised to find intellectual and spiritual seriousness on Christian campuses that put many putatively more selective secular schools to shame. There is plenty to critique about these institutions, especially the ways they handle the demands of pietistic donors and market-driven parents and students, but if this is failure, let's have some more.

This leads to the one feature of this book that is troubling, and genuinely perplexing. Hunter is quite thorough in his documentation of both the sociological literature and primary sources from the Christian Right, the Christian Left, and the neo-Anabaptists. What you are unlikely to ascertain from the text or the notes, however, is the existence of any Christian scholar or public actor who has pursued the course Hunter recommends other than Hunter himself, along with a few of his students and associates. D. Michael Lindsay's study of 360 Christians "in the halls of power" is waved aside as a mere cataloguing of isolated individuals, even as Hunter goes on to critique their generally pietistic and ecclesiologically deficient approach to their faith in precisely the terms that Lindsay has used in interviews about his work. Lindsay's February 2008 article in the American Sociological Review argues for the importance of overlapping networks and models of élite agency. Hunter does not reference it at all, nor John Schmalzbauer's People of Faith: Religious Conviction in Journalism and Higher Education, nor, in a slightly different vein, Rodney Stark's The Rise of Christianity. It would take nothing away from Hunter's brilliant synthesis to acknowledge that others are doing similarly important and influential work.