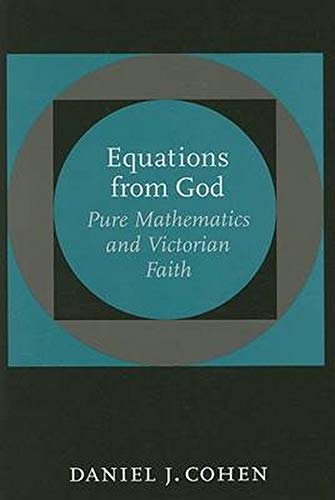 Oil and water, or gin and tonic?

Editor's Note: This article first appeared in the September/October 2009 issue of Books & Culture. If you find it delightful, as I did, you might also enjoy a book published last year by Cambridge University Press, Daniel Brown's The Poetry of Victorian Scientists.

It's not hard to predict how eagerly the new atheists would pounce if an orthodox Christian theologian were to concede that the notion that God is three-in-one could be labeled "irrational." Or that the doctrine of the Trinity is so far beyond our normal ways of thinking that one might refer to the three persons of the Godhead as "imaginary." Yet mathematicians quite unapologetically speak of "imaginary" and "irrational" numbers. Moreover, they are content to assume that if others think they have thereby lapsed into nonsense, so much the worse for them.

At the heart of Daniel J. Cohen's welcome and informative book, Equations from God: Pure Mathematics and Victorian Faith, is an account of how in the middle of the 19th century, leading Anglo-American mathematicians were convinced that their discipline bolstered belief in God. One such figure was Benjamin Peirce, the Harvard professor who is sometimes referred to as the father of pure mathematics in America. (He was also the father of Charles Sanders Peirce, the eminent philosopher and polymath.) In a charming recounting of his life and thought, Cohen observes that "a fascination with imaginary quantities seized Peirce as a child." (Peirce's son recollected that his father had a "superstitious reverence for the square root of minus one.")

Peirce was thoroughly imbued with the conviction that his discipline revealed the Almighty and his thoughts. He observed that mathematics should be seen as akin to the burning bush: a source of divine revelation that was continuous rather than consumed. In his lectures, after emerging triumphantly from an involved mathematical demonstration, Professor Peirce was known suddenly to pronounce, "Gentlemen, there must be a God!" Did I mention he was in dead earnest?

One of Peirce's friends was Thomas Hill, president of Harvard for most of the 1860s. Hill's conversion to this way of thinking came while meditating on Euclid one lazy summer day: "Pondering geometrical postulates, the empiricist philosophy of Locke suddenly seemed faulty." Hill went on to write Geometry and Faith (1849), and his exuberance for the powers of spiritual uplift inherent in this discipline seemingly knew no bounds. He traced the decline and fall of the Roman Empire to its failure to appreciate the idealist perspective on geometry. Likewise, if a research university had been established in antebellum America to nurture original work in mathematics, the Civil War might have been averted. It was absurd to imagine that one could keep the teaching of religion out of state schools, he averred, because that would necessitate banning geometry. For good measure, Peirce fed Hill's monomania with the observation that, although Darwinism was true, natural theology would still be impregnable as long as there was geometry.

Figures such as Peirce need to be treated with respect, but Cohen has some fun with crasser attempts to marshal math for apologetic purposes. The clergyman Tresham Gregg, for example, wrote a book subtitled, Thoughts on the Nature of the Differential Calculus, and on the Application of Its Principles to Metaphysics, with a View to the Attainment of Demonstration and Certainty in Moral, Political, and Ecclesiastical Affairs. In it, he asked such probing questions as: "What moral truth does the truth, that a number multiplied by its inverse is always equal to unity, illustrate?" Oliver Bryne, professor of mathematics at the College of Civil Engineers, London, penned The Creed of Saint Athanasius Proved by a Mathematical Parallel. This historic creed, the reader may recall, affirms that the Father is God, the Son is God, and the Holy Spirit is God, and yet there are not three Gods but one God. The burden of Bryne's mathematical proof is that infinity + infinity + infinity = infinity.

Alas, if not guilty of monomania, Cohen himself seems to be in the grip of a tidy interpretive scheme that ignores inconvenient counter-evidence. So, for example, although John William Colenso, bishop of Natal, makes it into Equations from God as a beloved liberal theologian, Cohen fails to mention that Colenso was also a mathematician. Before he was a bishop, Colenso was a fellow of St John's College, Cambridge, mathematics tutor at Harrow, and the author of popular textbooks on mathematics and algebra. More to the point, Colenso's attempts to use mathematics in order to debunk traditional Christian beliefs were no less risible than Bryne's efforts in the opposite direction. Including such evidence would have complicated Cohen's tale.