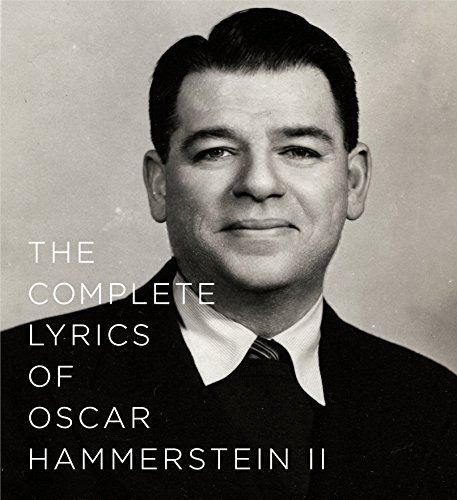 The lyrics of Oscar Hammerstein.

More than a few Broadway musical buffs eagerly awaited The Complete Lyrics of Oscar Hammerstein, which takes its place alongside Knopf's previously published lyric collections of Cole Porter, Lorenz Hart, Ira Gershwin, Irving Berlin, and Frank Loesser. For my part, I wasn't counting the days. There, I said it.

In popular perception, musicals tend to be considered corny—never mind that so many classic ones are not. Kiss Me, Kate, Sweet Charity, and A Little Night Music are not saccharine stories. It is the titanic success of Hammerstein's shows with Richard Rodgers that have played a large part in branding musicals as apple-cheeked experiences: think of corn as high as an elephant's eye, or South Pacific's Nellie Forbush, a winsome hick from Arkansas, singing about a "bright canary yellow" sky. Hammerstein was born and bred as an affluent New Yorker, but his spiritual home base was the rural and the sentimental.

Asked why he didn't write the "sophisticated" kind of musical that the other golden age composers specialized in, Hammerstein answered, "You mean one that takes place in a New York penthouse? Mostly because it doesn't interest me." It really didn't: he was known to tear up at his lyric for "The Surrey with the Fringe On Top," the one about chicks and geese scurrying and a lark waking up in the meadow.

To be sure, Hammerstein was top-notch in terms of technique. Imagine being handed the melody for "Ol' Man River" and asked to compose a lyric that 1) is plausible from an unlettered black laborer; 2) thematically sums up Show Boat's protean story about the passage of time, thwarted ambition, and ill-starred love; and nevertheless 3) does not sound forced. Hammerstein came up with a lyric so true that many mistake the song for a genuine black spiritual.

The content is the rub. "Ol' Man River" was of a subsidiary civil rights vein in Hammerstein's work (also exemplified by South Pacific's "You've Got to Be Carefully Taught"). The heart of his output had the wide-eyed ...